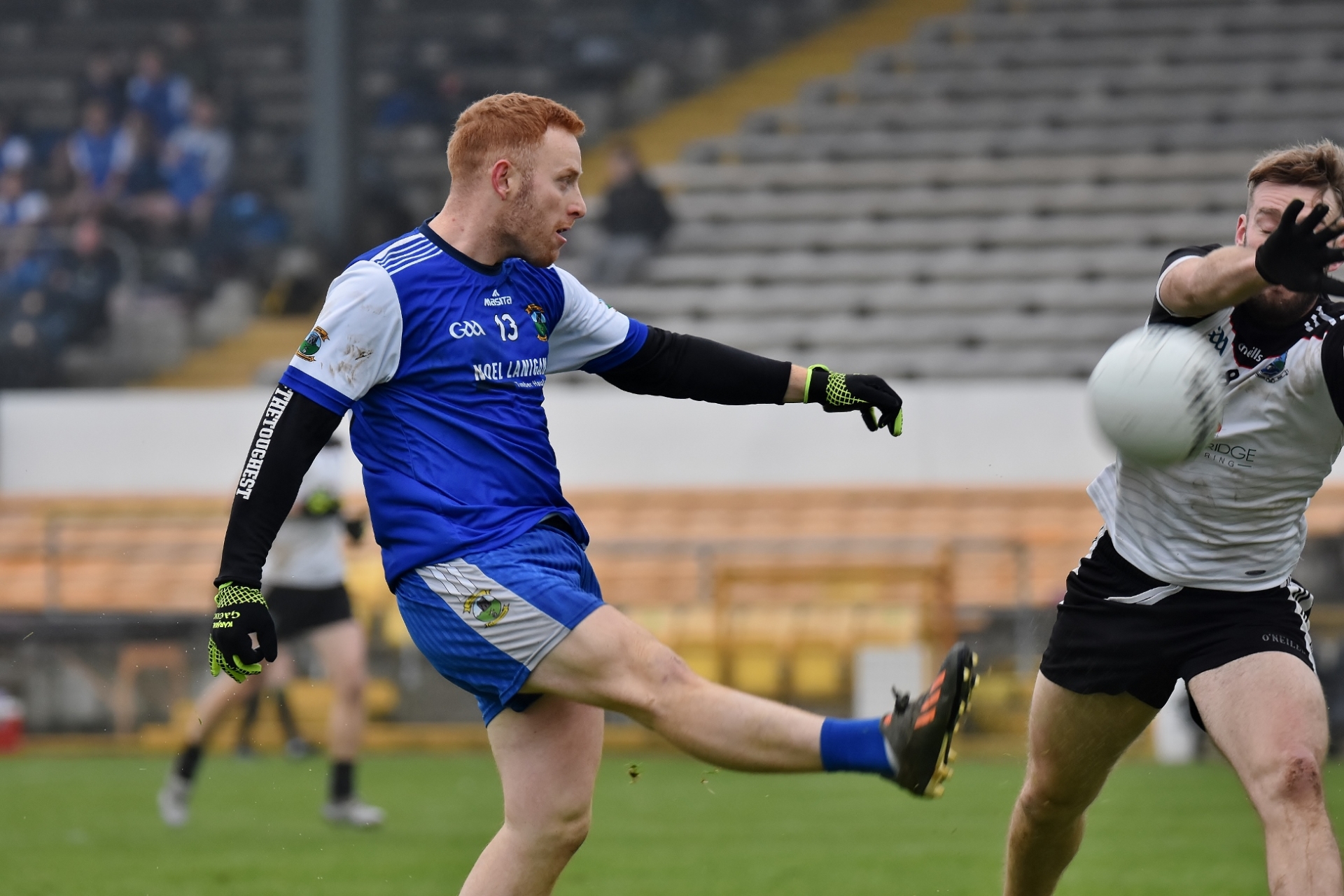 A moment of individual brilliance sealed the county senior football spoils for Thomastown.

Rory Monks was the toast of the ’Town after his late, late goal helped the boys in blue claim the county crown.

A final which had twisted this way and that seemed certain for a dramatic penalty shoot-out ending after both sides were deadlocked entering the final 60 seconds of normal time.

Then Monks made his move. Coming out the field to gather a low ball he picked up possession and, with one quick shimmy, slipped the attention of defenders Ger Malone and Simon Aylward.
With a clear path to goal, Monks surged forward towards the City End posts, leaving the ’Vat defence in his wake. He didn’t stop until he had closed down the posts, then showed incredible coolness to clip a sweet strike into the top right corner of the net.

As far as match-winning moves go, it was something else. However, it was no more than their efforts deserved. Thomastown showed incredible spirit and didn’t shirk from the challenge of trying to derail Mullinavat’s drive for a fifth senior title in a row.
Winning also gave Thomastown an incredible footballing double. They won the intermediate title of the delayed 2020 intermediate county championship in June, beating Glenmore by 2-12 to 1-7. Adding the senior crown little over five months later is some achievement!

Proving they would not be intimidated by the champions Thomastown made a sharp start to proceedings, forcing Mullinavat netminder Killian Dunphy into a smart save to deny Stephen Donnelly a goal within 30 seconds of the throw-in.
Mullinavat had to survive another scare soon after - Dunphy was mightily relieved to see Brian Staunton’s bouncing fifth minute delivery clatter off the top of the crossbar and then hit the post before coming out
While the ’Vat drew first blood with Padraic Gahan’s opening point it wasn’t long before they were behind. Full-forward Stephen Donnelly showed quick reactions to watch as Diarmuid Galway’s pass broke his way before he slammed an instinctive shot into the ’Vat net.

The wind was in Thomastown’s sails, something they highlighted when Davy Prendergast dashed through the centre to add a quick point to Donnelly’s goal. Ten minutes in and Thomastown were cruising (1-1 to 0-1). They went close to adding another goal just 60 seconds later, when Daithi Barron’s shot beat Dunphy, but Simon Aylward made a brilliant goal line save to rescue his side.

Mullinavat cleared their heads after that scare, pulling back two points via the impressive James Culleton and Oisin Knox (free). While Prendergast clipped over a fine point with his left foot an equally good score from Michael Malone meant the ’Vat were within one of the leaders at the first water break (1-2 to 0-4).

Thomas O’Hanrahan made it a two-point game soon after, taking his point after a hefty shoulder challenge, but Mullinavat showed the pedigree of champions when they tested the ’Town with their next attack. Culleton started the move with an excellent solo forward before releasing the ball to Knox, but netminder Patrick Khan pulled off a superb save to deny the forward.

While Thomastown recovered their composure, Rory Monks and Prendergast (free) adding points, another Knox free meant Mullinavat were just three behind at the interval (1-5 to 0-5).

The champions ramped up the pressure in the second half, forcing Thomastown to defend deeply. At stages the challengers had just three forwards inside the 65m line, but the players they brought back worked doubly hard to keep Mullinavat at bay.

Having survived several waves of Mullinavat attacks, it looked like Thomastown had found a way to keep their rivals from closing the gap. Rather than get frustrated, Mullinavat kept going forward and looked to have a real chance to get back into the game when they were awarded a 40th minute penalty. Oisin Knox drilled a low shot towards the bottom right corner, but Khan guessed correctly and dived to his left to beat the shot out.

When the following rebound, and subsequent 45 were spurned it looked like curtains for Mullinavat. However, they shook off the disappointment of those misses and hit back to raise the green flag six minutes later.
Started by a mark and quick pass from Culleton the ’Vat pressed forward, working the ball around through Michael Malone and Brian Phelan. The final pass fell to Padraic Gahan, who drilled an inch-perfect shot across the square, just beyond Khan’s outstretched left foot, and inside the far post (1-5 to 1-5).

Inspired by that goal Mullinavat went looking for more scores to turn the game their way. They pressed and pressed, working the ball from right to left, but the shooting gaps they needed weren’t given by Thomastown, who defended with incredible resolve.

Then, just when it looked like normal time would finish all square - Thomastown missed two frees in the final quarter - the Grennan men made their move. With Mullinavat on the front foot, searching for that one final score to win it, they were caught cold when a low ball was drilled forward and seized by Monks. One speedy break later the ’Vat net shook.
The win was within Thomastown’s grasp now, and they were determined to hold on. A sweet and swift strike from Thomas O’Hanrahan, who picked up an excellent pass and fired the ball over the bar via the outside of his right boot, sealed the title, their first at this grade since 1985.

Best for the winners were full-back Richard O’Hara, flying forward Daithi Barron and Davy Prendergast. For Mullinavat, their influential captain James Culleton, centre-back Ger Malone and the roving Liam Fennelly were most impressive.