Laugh out loud farce at An Ionad Dara 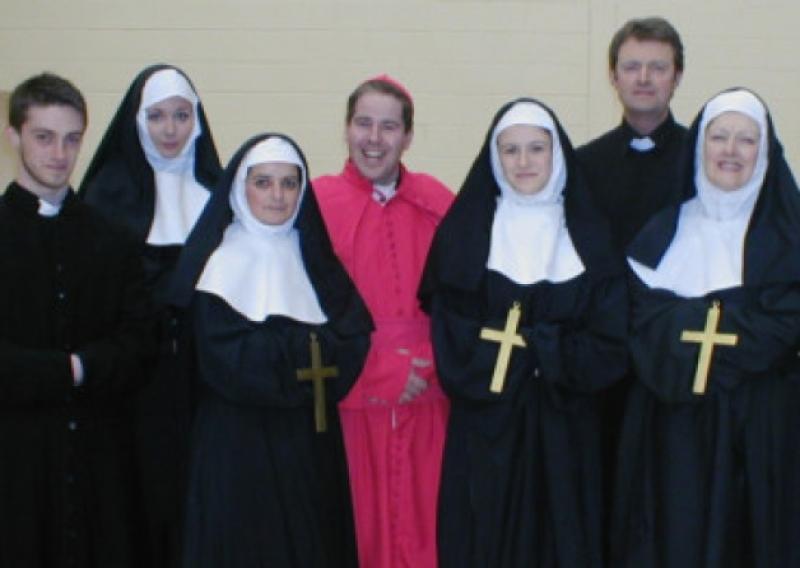 LOCAL actors will tread the boards this weekend in the village of Goresbridge when the Kilcumney Players stage their latest production Drinking Habits in Ionad Dara.

LOCAL actors will tread the boards this weekend in the village of Goresbridge when the Kilcumney Players stage their latest production Drinking Habits in Ionad Dara.

Rehearsals have been underway for the play since January following the huge success of A Wake in the West last year.

Drinkimg Habits is a farce in two acts. Sister Augusta and Sister Philamena have been secretly making and selling wine for years to keep the doors of their small convent open. But when their wine suddenly wins an award, newspaper reporters (and former fiancés) Paul and Sally begin searching for the winemakers. The time is the 1960s in the convent of the Sisters of Perpetual Sewing in Shady Glen, California.

As Sally and Paul sneak in to explore the convent, they are caught by Mother Superior. Sally pretends to be the new nun that Mother Superior was expecting, and Paul claims to be a visiting priest. When the Parish Priest Father Chenille sees Paul, he thinks that Rome is sending out a new priest to replace him. When the actual new nun, Sister Mary Catherine, does arrive, Mother Superior believes her to be a spy from Rome, sent to investigate the convent.

Chaos ensues as Augusta and Philamena try to secretly press more wine, Paul and Sally try to find the winemakers, and Mother Superior and Father Chenille spy on the suspected spies. Drinking Habits is a traditional, laugh-out-loud farce for the whole family that will keep audiences laughing well after the curtain call. Wine and secrets are inevitably spilled as everyone tries to preserve the convent and reconnect with lost loves.

Margaret Coady and Yvonne Devitor will play Augusta and Philamena with Ann Lennon as the Mother Superior. The reporters Paul and Sally will be portrayed by Edward Hayden and Grainne Kavanagh with John Whitely as Fr. Chenille. Adrian Kavanagh will take the role of George, the gardener with Rose Connolly as Sr. Mary Catherine.

A huge effort goes into the production. The convent set is already built, thanks to Tim Carr, Johnny Madden, Peter Breen, Jim Hanlon and Gerry Kavanagh and set painting began over the weekend with the cast and crew members all wielding brushes and rollers.

Props and costumes as usual are in the very capable and experienced hand of Finousa Hanlon while the stage manager is Ciara Murphy. Lighting and sound are in planning at present and PRO is Mags Whitely. Drinking Habits is directed by Mary Meaney.

Drinking Habits will run on from this Thursday (April 4) to Saturday at 8.30pm each evening. Tickets can be booked on