Life in the old ’Dog yet! 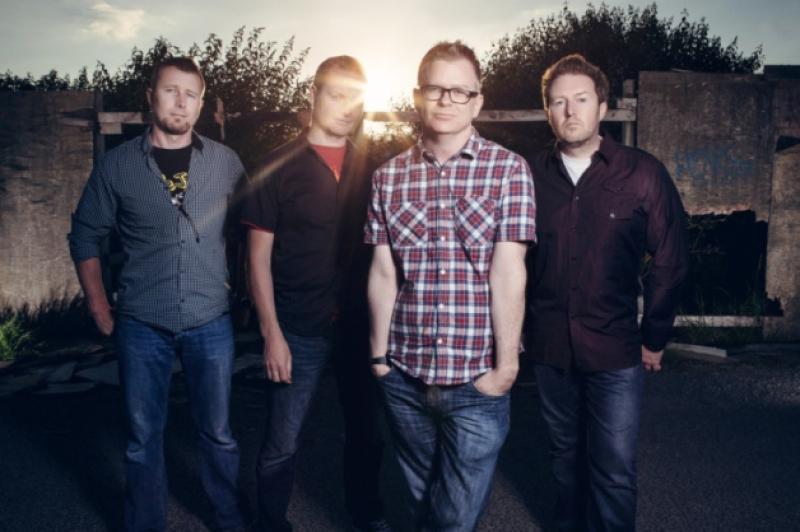 Four years ago there was no music, only silence.

Four years ago there was no music, only silence.

Now? There’s a new album and a live tour on the cards. So, where it did all go right for Kerbdog?

As drummer Darragh Butler explains, it had a lot to do with the constant swell of support from fans and musicians alike. That, a tribute album - and some BMX bikes!

In terms of distance the café isn’t too far from The Pumphouse, the venue for their famed showcase gigs where record execs showed up in stretch limos trying to sign the four-piece band which was made up of Butler, Dalton, bass player Colin Fennelly and singer/guitarist Cormac Battle.

However, the Kerbdog of 2014 are a million miles from the band who fell apart not long after releasing their long-delayed 1997 album On The Turn.

“It’s taken two years to get this album together,” Butler said of Congregation. “When you’re dealing with a live environment there’s an awful lot of work involved but the record is fizzing with energy.”

The band made the 16-track album, which featured live songs taken from shows recorded in Dublin, Bristol and London (there’s also a brand new studio recording of the previously unreleased song, Soaking Wet) through a PledgeMusic initiative where people could fund the record in return for album and merchandise packages.

The air around the duo almost crackles with the anticipation when they talk about the album, which will be released next week (this will be celebrated with an instore gig in Rollercoaster Records). It mirrors the feeling they had when they travelled to LA’s famed Sound City studios to record On The Turn, but on their return to Ireland Kerbdog’s world came crashing down.

“When we came back from recording On The Turn BritPop had just emerged,” Billy recalls. “That killed music in the UK and Europe - the Americans never got it.”

“I remember when we had been recording in Sound City that I went out to see Weezer,” Darragh added. “I thought it was the perfect gig - it’s still in my top three - the buzz and energy behind it was what we had in our record.

“We were very confident in it, but when we came back here the first thing you were asked what ‘who do you prefer - Oasis or Blur?’. It was like pushing an elephant up a stairs. We never got a look-in.”

Spiralling costs around the album didn’t help matters, while the delayed release killed their momentum. Despite only being two albums into a six-record deal, the axe swung.

“The end of the band had a strain on the friendship,” said Butler, who admitted to not listening to music for a year and a half after Kerbdog’s split. “Just like none of us wanted to listen to music we didn’t want to see each other, not because of a falling out, but because it would remind us of the misery we had been through.

“It took about a year for that to pass, but we’ve always been the best of friends - we still are. It’s a lovely thing to be able to do this record and tour now, to pick and choose what we do. We’re not under the gun to do relentless touring. We have a 10-day tour coming up that will be a blast.”

“We didn’t have the same support from the UK media (that led to a spin-off story of how the band were slated at a gig one night, despite not even playing it!),” added Dalton. “That, and some management mistakes didn’t help. The wrong tours were booked, proper videos weren’t made. But, in saying that, the success we did have is still there.”

While the band stopped playing, their music didn’t. The support of their fans was unwavering, which meant that Kerbdog continued to gain acclaim on the scene.

“Although we stopped, the fans kept liking the albums,” said Butler. “People like Biffy Clyro got in on the act so we became a band’s band. Some of their fans got into our music so the albums gained momentum and the fanbase grew.”

“The albums still get played,” added Dalton. Even though rock stations like Kerrang try to play contemporary stuff there are still rock shows with presenters who include our first two records in their favourite albums. It’s nice to know the music is still going out there.”

While Butler and Cormac Battle would go on to have success with Wilt, Kerbdog came calling again when the band were honoured with a tribute album.

“The tribute album was pretty flattering,” said Billy. “We were almost away from the whole thing, then he (Darragh) sent me an email asking what I thought of the tribute album. It was great to see what people still thought of us.

Even though the band was no more, their name was still well-known..

“When I opened my bike shop (Butler owns The Bike Store on Patrick Street) there were a few BMX brands that I really wanted to stock, so I rang the company in the UK,” he said, recounting the story.

“They were hesitant at first, but then the guy rang me back and asked was I Darragh who had been in Kerbdog. He told me he used to be a journalist and they had interviewed us in the back of our tour bus years ago. He gave the shop their brands exclusively for Ireland and we struck up a good relationship. He asked if the band would play a gig in Bristol, as a one-off.”

“As we were getting ready for the Bristol gig I went about gathering up all the Kerbdog stuff,” said Butler. “I had previously given everything away, but thought that maybe one day my grandkids would like to have the records so I put something out on Facebook. There was a guy who had duplicates and he was clearing them out so I said I’d have them. When he found out who I was he sent the stuff to the shop and wouldn’t take any payment.”

That man was Dave Draper, the producer of Congregation.

“Dave was a record producer who got into that profession after listening to our album,” Darragh explained. “He asked could he record the Bristol gig; when he played back the soundcheck to us the sound was incredible. He ended up recording that gig, using that and the Dublin Academy gig.

“He spent two years on the record, using all his spare time,” Butler continued. “He did it because he loved the band and because he wanted to give something back to us. It was by pure chance, meeting the guy who had interviewed us years ago and finding another who was selling some of our old stuff. The stars aligned and off it went!

While preparing for an appearance at the Sonisphere festival in July, the band got together with Draper to re-record an old song which has now become Electricity, their new single.

“Dave has a great ear,” said Billy. “He’s able to get the energy from the band.”

“I can remember when we finished the song that Dave was jumping around the studio shouting ‘there’s gold in there!’ - that’s his term for when something is working,” added Butler.

“I knew the energy was there in the song but you never know until you unleash it on people. Everyone has been really positive about it; it’s gone down a treat.

“We’re so old we don’t know if we’re cool anymore,” he said smiling. “But, apparently, the song sounds good!”

The swell of support is something which has always been there for the group.

Playing the shows, recording the album and preparing for their tour has been good for the band.

“We always felt we were robbed of the chance to have a career,” said Darragh. “We were cut short; we had that sense of unfinished business, which is why we wanted to do the live album and the single.”

However, it won’t be the end for Kerbdog.

“That full recording experience made it obvious how much fun it was when the pressure was off,” he added. “I’d say that we will do more new stuff; our only problem is the time constraint. We’re all in a good place and would be interested in doing it. Time is the thing.”

To coincide with the launch of Congregation, Kerbdog will play an instore gig at Rollercoaster Records, Kieran’s Street, on October 11.

The band will go on a ten-date tour next month, starting on November 14 at Dublin’s Academy.