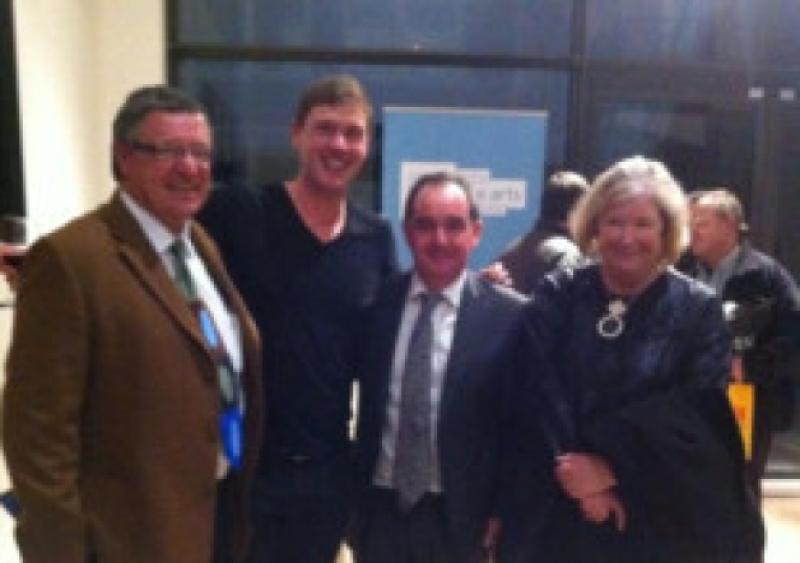 Kilkenny Labour Party Councillor and recent Mayor of the city, Seán Ó hArgáin has called for a Kilkenny venue to be secured in the near future to host ‘The Enclave’, the multi-media installation art piece which is taking the art world by storm.

Kilkenny Labour Party Councillor and recent Mayor of the city, Seán Ó hArgáin has called for a Kilkenny venue to be secured in the near future to host ‘The Enclave’, the multi-media installation art piece which is taking the art world by storm.

Cllr. Ó hArgáin was speaking after attending the Dublin launch of the show

in the Royal Hibernian Academy(RHA) Gallery of the exhibition by Kilkenny man, Richard Mosse from Bennettsbridge

“This exhibition is simply one of the most important things to happen to Irish and in particular Kilkenny art in a considerable time and it is getting huge international recognition,” Cllr O’hArgain said.

“The fact that Richard was chosen to represent Ireland at the Venice Biennale which I had the privilege of attending as Mayor of Kilkenny and that he was identified as the most exciting emerging artist in the Biennale, with recognition from all of the

major art critics in the world, means we should celebrate this achievement in Kilkenny,” he insisted.

The piece moves to Limerick for their City of Culture event following its run in the Royal Hibernian Academy, on Ely Place, Dublin and I believe it is urgent that a venue is secured to bring it to Kilkenny this year.

The fact that Anna O’ Sullivan, Director of the Butler Gallery, is also curator of the show and has played such a crucial role in bringing the piece and Richard’s abilities to international attention makes the procuring of a Kilkenny venue vital,” he added.

“I would love to see the piece feature in this year’s Kilkenny Arts Festival and I also believe that using one of the historic buildings in the Smithwick’s Brewery complex would be more than fitting. I will be seeking a meeting with the county manager in the coming days to discuss the matter,” he suggested.

The resulting installation, The Enclave, is the culmination of Mosses’ attempt to radically rethink war photography. It is a search for more adequate strategies to represent a forgotten African tragedy in which 5.4 million people have died of war-related causes in eastern Congo since 1998.

A long-standing power vacuum in eastern Congo has resulted in a horrifying cycle of violence.

Mosse brought a discontinued military surveillance film into this situation with a medium that registers an invisible spectrum of infrared light, and was originally designed for camouflage detection.

The Enclave will be exhibited at Ormston House and 6a Rutland Street, Limerick from 27 March to 5 May, as part of the celebration of Limerick City of Culture