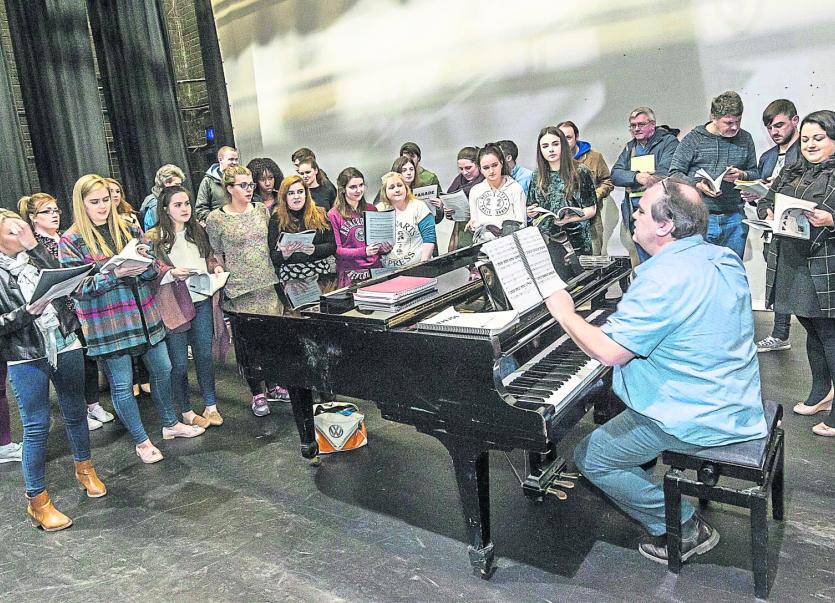 Some stories are so great, so epic in their impact and poignancy that they stretch through the annals of time.

The case of Leo Frank is one such story. Was he a monster, capable of killing a child and deserving of his fate, or an innocent man who became the scapegoat for a society overflowing with resentment towards rich, Jewish factory owners, a public outcry over the exploitation of child workers and a ruthless, unmerciful media culture?

This tragically captivating story is at the heart of the musical, “Parade”, Kilkenny Musical Society’s show choice for 2017.

This group of local performers, renowned for their insightful dramatic portrayals as evidenced by previous successes The Hired Man, Michael Collins: A Musical Drama, Sweeney Todd and most recently The Full Monty, take on this monumental show which is guaranteed to carry it’s audiences along on a wave of triumph, despair, hope and anger. Combined with an epic score, reminiscent of the haunting anthemic pieces of Michael Collins in 2014, Parade is a show that will leave an print on those who experience it.

The stellar cast lined up to recreate one of the most infamous trials in American history is of equally epic proportions. Michael Hayes, winner of the highly coveted Best Actor title at the AIMS national awards for his inspiring portrayal of ‘The Big Fella’ Michael Collins, takes the role of Leo Frank, the troubled protagonist at the epicenter of this compelling tale. History recalls his fate, but Michael reignites Leo’s journey from paragon to of society.

Sarah Brennan, firmly established as one of the most talented performers of the Kilkenny Musical scene, will play Lucille Frank, the steadfast wife of a man vilified by a society she was once at the heart of. Sarah’s stage legacy needs little introduction, having commanded the stages of Kilkenny in many pivotal roles such as Lovett in the society’s 2015 production of Sweeney Todd. Sarah & Michael are sure to prove a formidable pairing as they give us a window into the world of a couple facing the most tragic of futures.

Thomastown native, school girl Caoimhe Kelly, makes her debut with Kilkenny Musical Society, having most recently performed in the fantastic Watergate pantomime Cinderella. Caoimhe takes on the role of Mary Phagan – the young girl whose life is tragically cut short by a violent crime, which brings to the surface, simmering but potent tensions in the community of Atlanta Georgia.

Other key characters weaving through this fascinating tapestry of history, tragedy, love and hate are seasoned performers Kevin Reade, playing the part of cut-throat Machiavellian lawyer Hugh Dorsey, eager to make a name for himself with this sensational trial.

Eoghan Fingleton, a Portlaoise native originally but having wowed Kilkenny audiences with his portrayal of Harry Boland in Michael Collins and last year as troubled soon-to-be-stripper Malcolm in the success The Full Monty, returns to Parade as Newspaper editor, Tom Watson who is the 'voice of the southern people'.

With many striking resemblances to the cast of Michael Collins in 2014, other featured characters of note will be played by the expertise of Brendan Corcoran, Carlow native David Doyle, Rebecca Murphy and Kevina Hayes, last seen in the role of Cinderella in the highly successful 2017 Watergate pantomime.

At the helm of this highly anticipated performance is a production team of impressive credentials. Christine Scarry, renowned national and vocal coach returns once more following her triumphs with recent shows.

Curating the musical expertise of this group of talented performers is the internationally-acclaimed David Hayes who is musical director and arranger for the RTE/ Production 'The Voice of Ireland'. David has also scored original orchestrations for many musical pieces including 'Michael Collins - A musical drama', 'The All-Star Wars' and ' '. David also worked as musical director for Riverdance for three years.

The final member of the production team is choreographer Nicole McDonald who trained in the highly prestigious Laine arts in London. Nicole has worked extensively as a professional dancer and choreographer throughout the UK and Ireland. Nicole will take the cast and chorus through their paces as they depict the force of a people enraged by tragedy but blinded by prejudice.

In the last number of Kilkenny Musical Society has been both locally and critically acclaimed for its members’ ability to resonate with the stories they portray and carry their audiences along on a wave of musical and dramatic triumphs. From the heartache of Michael Collins and The Hired Man to the comedic genius of The Fully Monty, this group of local performers excel at what they do. This year's production runs from April 2 until April 8 and promises to be no different. Tickets are now on sale at the Watergate Box office and via the ’s website.

Relive the journey of Leo Frank, witness his fate, but be your own decider of his legacy.