Play is a comedy sensation 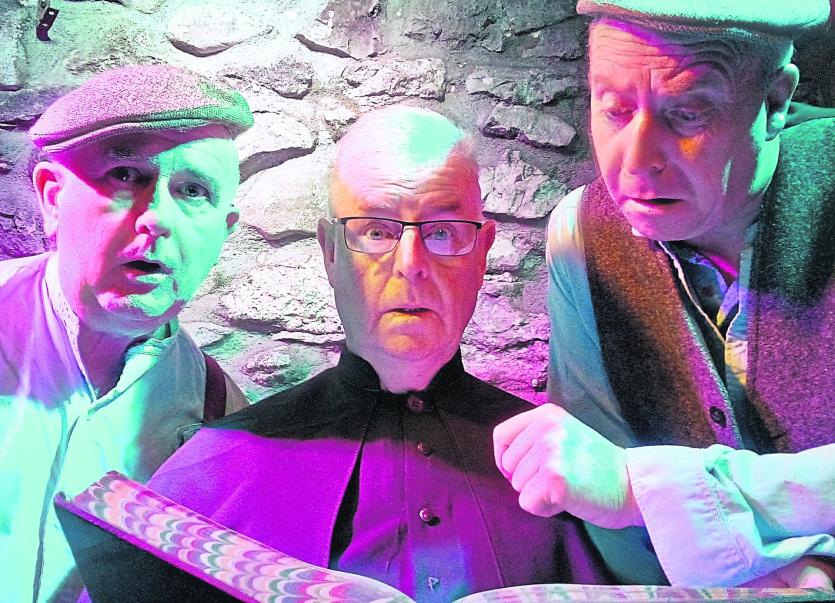 Having just performed the classic “War of the Worlds” at The Set Theatre on Tuesday night and which was broadcast on Community radio Kilkenny city 88.7fm, Lake Productions are well into rehearsals for their next theatrical production at Cleere’s theatre from November 14 to 17.
Three members of Lake and two guest musicians are putting the final touches to Trad, a play by Mark O’Doherty.
Trad is a rousing, comical, exaggerated take on Irishness and all it entails.
In a heated moment a 100-year-old man breaks the news to his one-legged father that he fathered a son 70 years before, ‘three moons before my 29th birthday’.
What follows is the story of their journey to locate this descendant, from ‘the top house’ through various locations in the community including the local graveyard, an orchard owned by a ‘Brit’ and the priest’s house.
On their quest to find the boy they discuss relevant topics like tea, tax avoidance, immigration, death, the love of the land, salt, genes and the importance of handing stories down from generation to generation.
Along the way they meet an old woman who seems to specialise in the non sequitur and a priest with an incredible story to tell.
Although very funny it has genuine poignancy.
The cast has an impressive average age. Mike Kelly, Derek Dooley and Joe Murray hope to break you free of reality and entertain you with this production. Direction is in the hands of Donal Gallagher, while guest musicians are Dan Ryan and Jimmy Conroy will feature in the show at Cleere’s theatre from November 14 to 17.