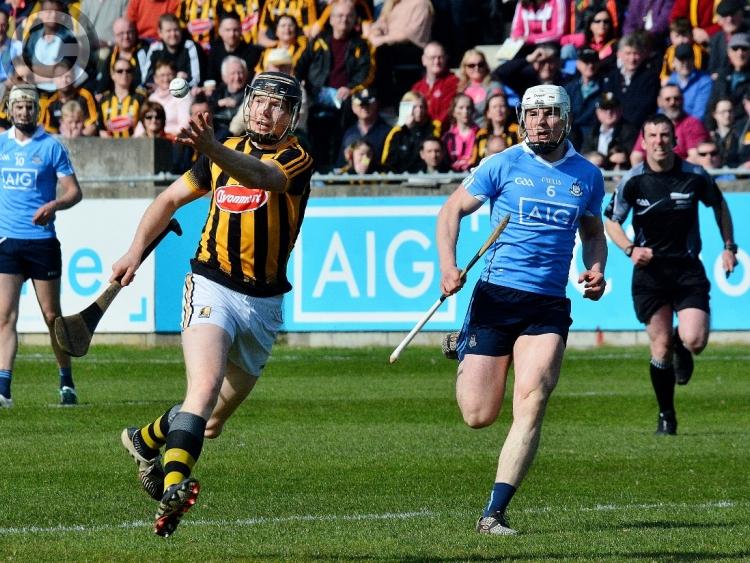 Walter Walsh was one of Kilkenny's top performers

The ’League is the learning ground! How often have we heard that?
Well, it most certainly was in Parnell Park.
Busy, busy Dublin provided a totally different sort of challenge to the thriller the Cats had been involved in against All-Ireland champions, Tipperary, last time out. The Semple Stadium pitch was wide open; likewise the hurling.
This was a helter-skelter, in your face affair. No one got much time on the ball on a tight pitch.
The players worked off instinct as much as anything as both sides simply let rip in a bid to avoid the possible horror of relegation.
Experiencing and coping with challenges of totally different styles and nature help players develop.
Victory earned Kilkenny the ticket into the Allianz Hurling League quarter-finals, and a mouth-watering home meeting with great rivals, Wexford.
Losers drop back
Dublin now face Clare, with the losers dropping back to Division IB.
Survival was all that mattered for Kilkenny on Sunday. The performance didn’t have to be pristine; the sort of stuff that satisfies the purists. It wasn’t!
No, this was a day for a ‘roll up the sleeves and get stuck in’ sort of effort.
And that’s what Kilkenny produced. Even though they had the advantage of an extra man for around 40 minutes - Dublin goalie Gary Maguire was shown a straight red carded - the Cats still had to dog it out to the bitter end against a defiant team that simply wouldn’t give in.
Nearly sneaked goal
In fact, Dublin nearly sneaked a goal in the 73rd minute. Defender Paul Murphy pulled down Eamon Dillon, earning himself a booking, as the No. 15 threatened the visitors goal. The free from 22 metres looked inviting for Dillon, and he had a pop for a goal.
The ball was scrambled out for a 65, which was lobbed into the square. Kilkenny repelled the danger.
The learning process then? Surprise, surprise some of Kilkenny’s best performers were the newer players on the team. They will be all the better for having survived a tempest like this.
Conor Martin was very good. Jason Cleere was very good. Paddy Deegan didn’t do too badly, and he got first hand experience of the pace of the inter-county game when taken on a few serious runs by his man, the excellent Ben Quinn.
Conor O’Shea was going well too until a hamstring injury cut short his involvement in the 61st minute.
The Parnell Park pitch is tight; the tackles go in thick and fast. If a player can survive there, he can survive anywhere, as Sinatra might say.
Martin and Cleere were wonderful. The former was extremely efficient with possession. Cleere was one of Kilkenny’s stand out men when the Dubs were ripping into them in the third quarter.
Others did very well too - T.J. Reid made things happen for others, and was a real help to Martin; Conor Fogarty was extremely tidy in everything he did; Walter Walsh put himself about with real menace and put hardship on the opposition.
The Tullogher man is a big player for Kilkenny, in more ways than one.
There was one fault we felt surfaced. Kilkenny found it hard to win ball in the air on the opposing ’40’, especially when Dublin put the push on around the hour mark. We saw a hint of this before. It appeared to be more noticeable on Sunday.
Dublin opened backed by the fresh breeze blowing from the road end. After an early exchange of points they suffered a setback when Conor Martin scored a good goal on seven minutes.
Colin Fennelly unhinged Dublin with a scorching sprint up the right wing. As he neared the ’14’ he looked up, spotted Martin inside and smashed a hurley driven pass right into the Emeralds man’s hand.
Martin stepped inside his man, and from 14 metres buried the ball in the net (1-1 to 0-2).
The Dubs recovered to share parity twice afterwards (1-2 to 0-5; 1-3 to 0-6) before they hit the front for the first time in the 22nd minute when deadly free taker, Donal Burke converted a free.
On they roared, Burke and the flying Chris Crummey shooting unanswered points to underline their creeping dominance.

Best move
Then Kilkenny pieced together their best move of the match. Martin started the move with a hand-pass to T.J. Reid on the ’50’. Walter Walsh continued it in like fashion, setting Liam Blanchfield clear to the right of goal.
The ’keeper was left exposed. He let fly with his hurley at the advancing Blanchfield as the Bennettsbridge man let fly at goal. The net danced. The ash splintered. Maguire saw red.
Kilkenny needed the lift of that equalising score (2-3 to 0-9). Reid won them the lead, but Burke posted a reply.
Then right on the rest T.J. Reid threw over another point from a free to leave Kilkenny leaders by 2-5 to 0-10 at half-time after they had absorbed fair pressure.
Padraig Walsh, who picked up a facial injury in the fifth minute, didn’t reappear. Joey Holden took his place, and Paul Murphy was used as the ’extra man’ playing just behind the centre-back.
Things looked most promising for the visitors when Liam Blanchfield and Colin Fennelly tossed over quick points before everyone has retaken their seats in the stand.
Dublin simply roared on. On 90 seconds Ryan O’Dwyer got in a powerful low drive which ’keeper, Eoin Murphy, failed to kill dead. The ball ran loose. Burke forced it over the line from close range.
Richie Hogan weighed in with a minor for the visitors, but again Dublin bounced back. This time two scores from Burke had them in front (2-8 to 1-12).
After Reid scrubbed the deficit, he added a second minor, which was boosted by scores from Conor Martin and Liam Blanchfield. With a lead of 2-12 to 1-12 following a run of four scores, the suggestion was that maybe Kilkenny were ready to charge on.
They weren’t allowed. Two of Dublin’s best players, Chris Crummey and Ben Quinn weighed in with points to breath new life into their challenge (2-12 to 1-14).
Their legs were beginning to weaken, however. From there to the end Kilkenny bossed the scoring exchanges 8-2 to win the match.
It was never easy against big hearted warriors like Liam Rushe, Ben Quinn, Chris Crummey, Eoghan O’Donnell and deadly free taker, Donal Burke.
Kilkenny got what they wanted - a place in the quarter-finals. Mission accomplished!