Stars align in a great week for Kilkenny athletics

Plus the latest fixtures and results 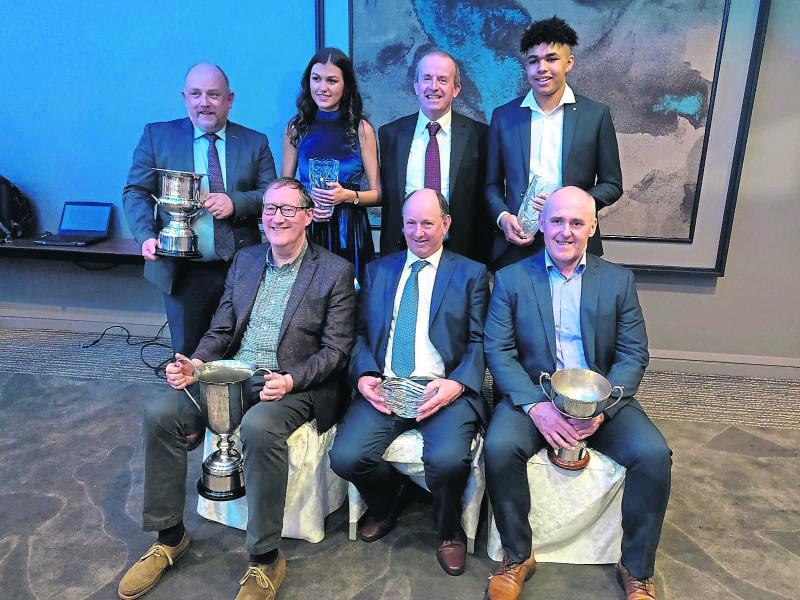 Kilkenny winners at the Leinster Athletics Awards. Sophie Jackman and Jordan Knight were among the individual winners, with Brow Rangers scooping a club title

The high standard of athletics in Kilkenny was evident as numerous athletes and clubs were honoured at the Leinster Star awards.

In the same week that same high calibre was equally evident when two Kilkenny schools finished top of the class in Leinster cross-country competition.

Star Awards
The Leinster star awards are an annual event which pays tribute to athletes, clubs and officials who have made an indelible impact on the athletics scene in the province.

Swapping athletics gear for finer attire, people attended the ceremony at the Radisson Blu in Athlone, where people were presented with their awards.

The awards are calculated on the basis of the athlete’s performances in the Leinster Championships, with a tiered points system in place - the more medals an athlete gets for their efforts, the more points they accumulate. While the system does not discount the single individual performances of other athletes who may only compete at one event (there are overall awards to cater for this) the system does favour the more versatile athlete who can compete at multiple events.

Sophie Jackman (St Senan’s) is one athlete who can compete in events across the indoor, track and cross-country settings. Jackman won the Leinster award for the best overall female athlete in Kilkenny.

The St Senan’s athlete took the prize after winning a string of Leinster medals across jumps, middle distance, hurdles and cross country. She won three gold, two silver and one bronze at the Leinster Championships and two individual cross-country medals.

Another athlete who also won an award in 2019 was Jordan Knight (St Joseph’s). In 2020 he retained the Leinster award for the best overall male athlete in Kilkenny.

Like Jackman, Knight is a very versatile athlete, so versatile that he can win medals at the combined events. His Leinster Championship haul earned him four gold, four silver and one bronze. Additionally Knight broke the Leinster 400m indoor record.

Such is the competition for the star awards amongst Kilkenny athletes, Knight had the highest point accumulation of all the star awards from all athletes in Leinster. He was just one point ahead of Tadgh Connolly (St Senan’s). The pair were over 10 points clear of the next highest points scorer.

The junior/under-23 award went to Ciara Deely of Kilkenny City Harriers (KCH). A 400m and long hurdles specialist, she won both competitions at the Leinster Seniors.

Coming from her superb year in 2018, where she competed in the World Juniors at 400m, Ciara used 2019 to start her campaign towards the major under 23 championships, concentrating on technical build up for her events. Part of this build up included working at both 400m and 400m hurdles. Her two Leinster golds allowed her to test her progression.

Bob Saunders of St Joseph’s received the honorary award for his lifetime contribution to athletics in the county. A long-standing MC at many county events he has close on 50 years involvement in athletics in Kilkenny both as an athlete and an official.

Bob joined St Joseph’s AC back in 1970 and competed at many road and cross country events. He served on the Kilkenny County Board from 1981 to 1989 as Chairperson, registrar, track and field secretary and PRO. He was vice-chairman of Athletics Leinster in 1990 and was involved with Athletics Leinster for 12 years. At club level he has held virtually every office on the club committee.

Brow Rangers were named the best senior track and field club in Leinster. The band of throwers can be seen in force at all Leinster events collecting medals of all hue in virtually every throwing event. The group, which is spearheaded by Murty and Joe Kelly, gets bigger every year.

Brow finished on 40 points, 18 points clear of Mullingar Harriers, Bohermeen and Tullamore Harriers - all very large clubs with athletes competing at a variety of events. They also made history when they became the first ever Kilkenny club to win this award. The team consisted of Sean Maher, Ciaran Coady, John Joe Kelly, Emma Kelly, Patrick Darcy, Aoife Coady and Adam Kelly. Between them they won four gold, three silver and four bronze medals at the Leinster senior track and field championships.

The Juvenile Cup events proved very successful for Kilkenny clubs, especially for KCH. The city club received the Mick Quinn Cup for the best juvenile (under-12 to 15) track and field club, helped to no end by their superb performance and proliferation in the relays. KCH have won numerous gold, silver and bronze medals in both indoor and outdoor relay events.

The Quinn Cup is no stranger to Kilkenny territory; both KCH and St Senan’s have won this cup on several occasions going back to the 1980s. Other Kilkenny clubs did well in the juvenile cups such as St Senan’s AC, who finished joint third in the Mick Quinn Cup and fourth in the Eurotab Cup for under-16s to 19s. St Joseph’s, Thomastown, Gowran and Brow Rangers all featured strongly in the rankings.

The final award that came back to Kilkenny was the Cross-Country Cup. Kilkenny lost this title to Meath in 2018, so it was good to see the cup back in the county based on the results for the 2019 season. Kilkenny has won the Cup five out of the last six years.

Held in Santry, Dublin there was not only individual success for athletes and collective glory for teams, but two Kilkenny schools won best overall school accolades.

Following hot on the heels of the Leinsters were the Munster Schools cross-country, which were held at a very mucky Clarecastle.

Individually Eve Dunphy (Abbey CC) was third overall in the minor girls race with the Abbey Community School finishing second in the team competition. In the junior boys’ race Isaac Carew (Abbey CC) was unfortunate to finish two places short of qualifying for the Nationals when coming home in 17th place.

The Junior Girls race saw a magnificent run from Caoimhe Phelan to finish second while Molly Long was 13th. The girls, students at Abbey CC, have now qualified individually for the All-Irelands on March 7.

University
A band of nine Kilkenny athletes competed at the Irish University Championships on Saturday. These athletes, representing their respective universities, are part of a new wave of athletes that are transitioning to the senior ranks.

Top performance went to Sophie Becker (DCU) who won the 400m. There were two bronze medals that came to the group - Shane Power (DCU) cleared 4m 20cm in the pole vault while Patrick Darcy (WIT) was third in the weight throw.

It’s not only in Ireland that athletes that are doing well on the indoor university circuit. In the USA two more of Kilkenny’s university athletes are embarking on their own university indoor circuit.

Peter Lynch recorded an impressive personal best of 14.09 for 5,000 in an indoor meet in Iowa. Peter shaved 26 seconds off his 5km time in the process.