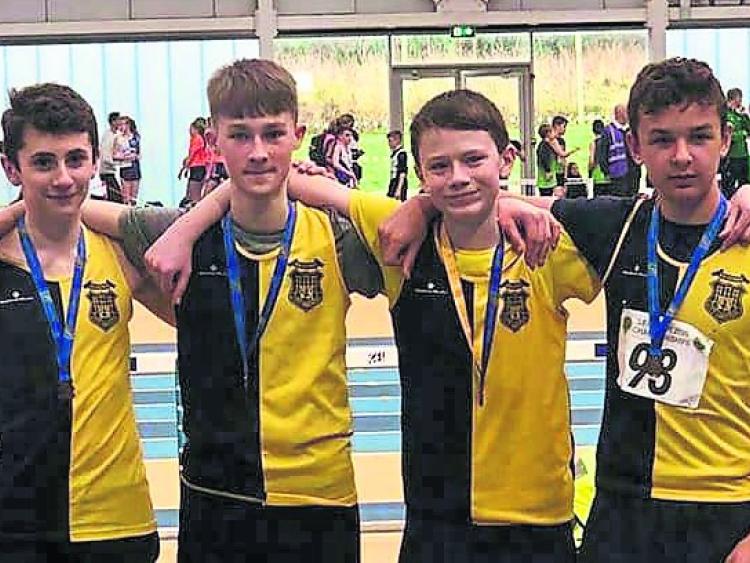 While the Oscars and Grammys have come and gone the athletics world is still in the midst of its own awards season.
Following on from the Leinster Star Awards, local eyes will be fixed on both the county and Athletics Ireland awards this week.

Coupled with the glitz and glamour, the competitive action continued with day three of the Leinster juvenile and the Leinster junior, senior and masters indoor championships.

Saturday saw the Leinster Junior, Senior and Masters Indoor championships in Abbotstown. While numbers in the more senior events were often low the junior races fielded some good numbers with immense depth of talent.

Kilkenny City Harriers (KCH) athlete Shay McEvoy was very impressive as he obliterated the opposition from early on in the 3,000m junior race. It was pretty much a solo run from McEvoy, who not only won the title by 50 seconds but also shaved 18 seconds off Paul O’Donnell’s three-year old Leinster record.

This is just two seconds off the personal best (PB) of 8.22 which he achieved in Watford in 2019 and 10 seconds off qualification for this year’s World Juniors in Kenya.

Other juniors in action were Evan O’Toole (St Joseph’s) who leaped a fantastic 12m 5cm to win the junior triple jump.

Clubmate Jordan Knight jumped another 6m 32cm to take second in the long jump. This made up for the slight fiasco in the 400m when the electronic timing failed and the final had to be abandoned.

Knight came into that final as the third fastest runner and had his sights on a podium place.

Hannah O’Keeffe (Thomastown) had a good run in the junior women’s 3,000m to finish sixth. The Thomastown junior relay team of Ellen Ryan, Aine Kirwan, Fiona Dillon and Orla O’Keeffe had a great duel with eventual winners Ratoath as they finished second in the 4x400m relay.

Brow Rangers’ Patrick Darcy was Kilkenny’s best senior on the day as he won the shot-put from club mate Michael Sherrin and was second in the weight for distance competition. St Joseph’s AC Shane Power got another pole vault competition under his belt as he cleared 4m 20cm to finish second.

St Joseph’s were well supported in the masters events. Verona Fenlon was their star athlete, winning two gold and two silver medals in the over-45s. Mary Breen set a new championship best when she won the over-50 Weight for Distance title. The club’s race walkers kept up their high standards, winning three gold and one silver.

The final day of the Leinster juvenile indoors covered the relays, triple jump, pole vault and older age groups shot-put and high jump on Sunday. Throughout the day clubs like St Senan’s, KCH, Gowran, St Joseph’s and Thomastown were represented.

In the field events Tadgh Connolly (St Senan’s) stamped his authority on the under-17 shot-put with a win that was almost two metres ahead of his nearest opponent. It was the fourth year in a row that Connolly has won the Leinster indoor shot title.

Senan’s tasted a shot double when Mark Wallis won both the under-12 and 13 titles. Another gold for the southern club came from the under-16 triple jump with Keelin Roche clinching victory.

Evan O’Toole excelled in the Triple Jump. With a junior title under his belt from Saturday he not only won the under-17 title but produced both a PB and a championship best performance, bringing his personal best to a new distance of 12.25.

Relays have long been a favourite for juvenile athletes, especially the indoor relays. The popularity of the events was highlighted in the amount of teams competing in the younger age categories - there were 33 teams in the girls’ under-12 competition, a total of 132 girls lining out to compete in a 4x200m event.

KCH turned the relays into their own show, taking home two gold, three silver and two bronze medals. Their boys’ under-12 and under-16 teams were the gold medal winners, the under-12 boys retaining their title from 2019.

St Joseph’s continued their medal-winning tradition with their boys’ under-18 team. This team has been a podium finisher since their under-12 days, with virtually all the same team members.

Another team to have an unblemished podium record is the Thomastown girls’ under-19 squad. Like St Joseph’s this team have been together since under-12 and have medalled in all Indoor Leinsters.

Langton’s Set Theatre is the place to be on Friday for the Kilkenny County Board athletics awards night.

This event, which starts at 8pm, honours Kilkenny’s athletes and their magnificent endeavours throughout 2019. Following from that there will be the National Athletics awards, at which Kilkenny athletes will be in the running for prizes.

Some of the athletes based in the south of the county were hailed at the Waterford Credit Union annual awards. With the Credit Union area spilling into the Piltown electoral district, athletes from St Senan’s AC are entitled to participate.

The winner of the Supreme Athlete of the Year award was announced at the ceremony.

Connolly also won one silver medal, two bronze and was fourth in the under-16 cross-country. No other athlete could match the amount of titles, nor the range of events, in which his medal winning haul covered.