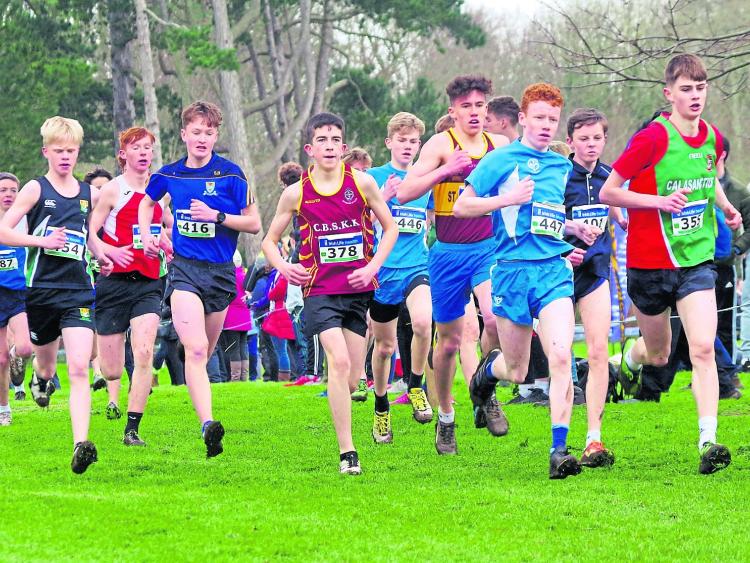 Four championship events were held last weekend, each engaging a different audience of our burgeoning athletic talents in the county.
Saturday marked the culmination of the cross country season for most of our secondary school athletes, when they competed in the All-Ireland Schools cross-country championships in Santry.
Meanwhile in Cork, the Irish University Championships saw third level students compete in their cross-country championships.
Yet another National Championships was held on Saturday, the National Road Walks Championships in Raheny, where Irish and International athletes competed to earn Olympic qualification times. Finally on Sunday the All-Ireland Masters Indoors was held in Athlone.

Schools Cross Country
In a week with lots of athletic action, Kilkenny juveniles were focused on the last cross country event on Irish soil for the season – the All-Ireland schools cross-country championships.
Athletes cast aside their club singlets and joined forces with runners from different clubs to compete as one under the school banner. The Kilkenny focus saw locals battle for honours with St Kieran’s, the CBS and Loreto, as well as the Abbey CC in Ferrybank and Ursuline Waterford.
Aside from the usual school titles up for grabs, there was also places on the Irish team for the schools international. The event, which this year will be held in Falkirk, Scotland, will feature two Kilkenny runners - Caoimhe Phelan (St Senan’s) who ran for the Abbey CC and Billy Coogan (Gowran) running for the CBS, Kilkenny. Both qualified from the junior races.
The minor girls kick started the day with four Kilkenny athletes in action. This was a very exciting race up front with three girls virtually inseparable right to the line. A final sprint saw Saoirse Fitzgerald of Lucan Community School secure the gold from Ferne Duffy (Ballybay CC) and Grace Byrne (Loreto Mullingar).
Back in 14th place Sara Kehoe (Loreto) was the first Kilkenny athlete to cross. The very young Abbey trio of Eve Dunphy (24), Niamh Cleary (56) and Keelin Duggan (64) helped their school finish eighth.
In the minor boys competition St Kieran’s College were very unlucky to miss out on bronze medals in this race, finishing just three points shy of third-placed Midleton CBS.
The team was led home by Ruairi McEvoy in 14th place. This was a very good run from McEvoy, who competed in a field of 109 athletes.

Race Walking
The national 20km race walking championships took on Olympic importance in Raheny. With the qualification system now changed, athletes gain points from several key races that will determine their Olympic participation.
For the race-walking event at Tokyo there are 60 places available worldwide. The Irish championships were part of a series of races where Olympic points were available. Athletes from South Africa, Great Britain, Guatemala and other countries flocked to Irish shores in search of these points.
Kate Veale of West Waterford was the pre-race favourite and true to form she won the race. In 2nd place was St Joseph’s Maggie O’Connor. This was her first ever national senior medal and her first 20km event in a few years. While Maggie has not set her sights on Tokyo, she has hopes of competing once again in a European Masters event.

University
Three Kilkenny athletes competed in the Irish Universities cross-country championships at the weekend. Lauren Dermody (Castlecomer) was 11th when racing for UL while Grace Richardson (KCH) was 22nd in the colours of UCC. Meave O’Connor (Thomastown) was on the UCD team that was third.
Meanwhile in the USA Aoibhe Richardson has qualified for the NCAA Indoor Nationals in the 5,000m. In the USA University system athletes with the top 16 fastest times from the conference races gain qualification. Having raced the 5,000m conference race almost two weeks ago Aoibhe had to wait until last Friday to learn her fate. The nationals are next weekend.

Masters Indoor
Athletes from Brow Rangers, Gowran, Kings River and St Joseph’s competed in the Masters Indoor All-Irelands in Athlone last weekend. In total the county took home 18 individual medals and one set of relay team medals. Personal bests and championship bests were set by these athletes.
Brid Lawlor of St Joseph’s set a new championship best performance record in the over 60 walk with a time of 19.59. St Joseph’s AC made a clean sweep of the walking events, winning the ladies over-40, 45 and over-60 women’s and over-50 men with wins from Tracey Malone, Maggie O’Connor, Brid Lawlor and JohnJoe Lawlor.
There was another record set in the walks when 86-year-old Con Harty, competing for Civil Service AC, won the over-85 men’s walk. Con was an all too familiar figure in Kilkenny back in the 1960s and 1970s when he raced greats like John Mackey of St Joseph’s AC who accompanied him on many international races.
Catriona Corr of Gowran took home a set of medals when she won gold, silver and bronze in the 400m, 200m and 65m respectively in the over-40 category. Her 63 second 400m was very impressive indeed.
There were further gold medals from the St Joseph’s throwers when Verena Fenlon won the over-45 weight for distance to add to her silver shot-put medal. Mary Breen won the over-55 weight for distance to add to her bronze shot-put medal.
Gowran won silver in the over-35 relay with contributions from individual long and high jump medallists Padraig Crawford, Tom Corrigan, John Leamy and Simon O’Dwyer.
Brow Rangers were represented by coach and serial medallist Murty Kelly. Murty was third in the over-70 shot putt. He has been medalling at Masters events for the last 30 years.
Finally, 66-year-old Joe Gough of West Waterford set a new world record of 60 seconds in the Masters over-65 400m. Joe was named the World Masters Athlete of the Year last October at the IAAF awards in Monaco after setting two world records in the 800m.