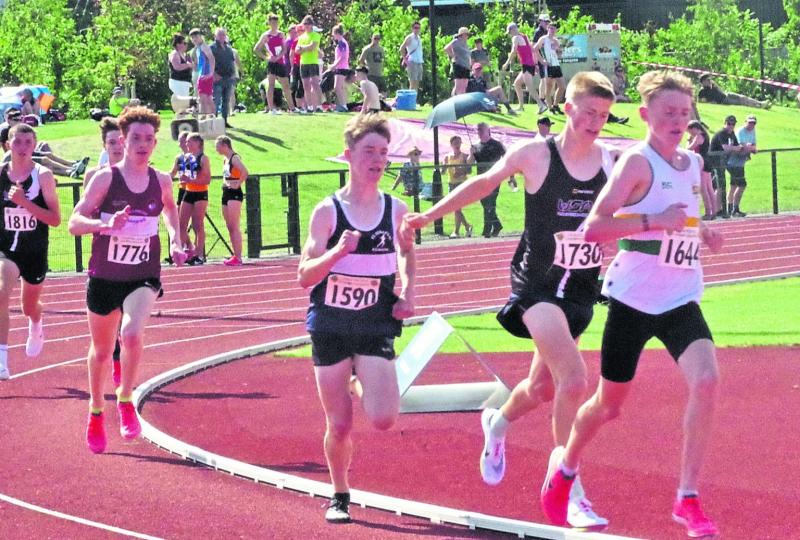 The summer track season is ramping up nicely.

The final stage of the county championships was held along with days two and three of the Leinster championships, with all levels of competition beginning to morph into each other.

A sundrenched Carlow IT hazed in a scorching 29 degrees with burning rubber beneath athletes’ feet.

Surrounded by acres of playing fields, there was nowhere to hide from that blazing sun. The sun had you everywhere – there was no escape. No trees, no bushes, nothing. Athletes hiding under umbrellas, water bottles in hand. Three, four and maybe more – all emptied and still more was needed.

For this year in order to reduce numbers at the National Championships, only three qualify from Leinster to Nationals.

Additionally, athletes up to age 16 are confined to just two events with 17-19 years confined to three events. This most definitely has an impact on potential medals for the counties athletes – particularly those in the jumping and throwing events.
Athletes like Adam Slawinski (KCH), Rian McDonald (St Senan’s) and Rachel Gardiner (Gowran) most definitely would have more medals in the bag – potentially gold too.

Despite the heat, there were some amazing races, fast, competitive and limitless in the hot conditions. Again the boys’ under-17 race proved to be one of the best middle distance races of the day.

The 1,500m had the same athletes as the 3,000 the week before. This time David Williams made sure he was in the medals.

It was neck and neck with Fenlon pulling ahead with 60m to go. Williams was second just one second behind the winner and a new four second personal best (PB) to boot.

David also produced a great performance in the 800m a day later when he finished fourth, which was another PB of 2.01 and the fourth fastest time in Ireland this year.

Ben Wallis (St Senan’s) displayed that determination he showed in the recent county championships, when he took the lead in the boys’ under-16 1,500m from the gun.

Ben was in a group of eight athletes that broke away from the rest of the field and remained tightly grouped for most of the race. Rounding the bend with 200m to go, Mullingar man Conor Sherwin made a break taking three other athletes.

Not to be left behind, Wallis dug deep to draw level with Sherwin as they rounded into the home straight. There was a sense of satisfaction with Wallis as he was smiling for the last 100m.

This was his first ever Leinster individual track medal – one he had waited so long for.

If the boys managed medals in all the 1,500m races from under-16 to under-19 then the girls were somewhat unlucky to be stuck with mostly fourth placings.

It took Hannah Kehoe (Thomastown) to break the curse of fourth place when she sprinted hard for the last 150m to take second ahead of Lucy Jacob of Naas.

It was good to see Kehoe back in the medals after a two-year absence due to injury. Having transferred from Gowran to Thomastown in the intervening period, we hope to see more of the blue singlet in the medals from here on in.

Molly Daly (KCH) impressed in the sprints when she was a clear winner of the girls’ under-14.

Daly easily won her heat being the only athletes from all three heats to break 11 seconds for 80m, when she clocked 10.97 to qualify with the leading time from the final.

In the final she was yet again the only athlete under 11 seconds when she produced a new PB of 10.82.

Molly repeated the gold medal winning performance a day later when she was once again a clear winner – this time in the 200m. She was the only girl to record sub 28 seconds in both the heat and finals.

It will be interesting to see how Molly progresses over the next few years. Perhaps her good endurance will see her compete over 400m as the preferred distance. For now, we can expect to see her excel nationally at both 100m and 200m.

KCH produced a one-two in the boys’ under-16 200m with Adam Slawinski pipping clubmate Liam Thompson for gold. Both Adam and Liam had good championships with Adam third in the under-16 Long Jump and Liam second in the sprint. Athletes are for this year confined to just two events.

The boys’ under-14 hammer saw Kilkenny athletes take a clean sweep of the medals. Gowran’s Noah Denieffe pipped county champion St Senan’s Rian McDonald by just one centimetre in the final round to take the gold with Charlie Ryan of Gowran in third place.

Peter McDonald (St Senan’s) impressed in the javelin when he threw 51.53 to win the boys’ under-18 event this was 12 metres clear of the runner up Hugh Kelly of Inbhear Dee. Daniel Griffin (St Senan’s) was third.

It was a good javelin championship for St Senan’s when Molly Long was third in the girls’ under-16 and Daire Casey Power third in the boys’ under-14.

Brow Rangers produced another gold in the field events, when Dylan Walsh won the boys’ under-15 hammer. Orla Brennan (Gowran) also tasted field event success with a win in the girls’ under-14 hammer. Brow Rangers athlete Maeve O’Donovan was second in the same event.

St Joseph’s AC and St Senan’s AC dominated the girls walks. Their technique being excellent and these girls will go far in the All Irelands in August.

Both clubs have participated in the Robert Heffernan Race Walking Academy through lockdown and the results are showing in the excellent work they did over the winter months.

St Joseph’s AC Lilly Ryan was an impressive winner of the under-14 event with Clodagh Cooke (St Senan’s) second. Lilly Doyle (St Joseph’s) was second in the girls’ under-15.

Keelin Duggan (St Senan’s) won her first Leinster title as she literally walked away with the under-16 event. Sophie Monahan (St Senan’s) completed the gruelling 3,000 under-17 event in the hottest period of the day, through a scorching 29 degrees. She was third.

The final stage of the Leinster juvenile championships takes place next Saturday, again in Carlow IT. All hope the athletes are not subject to the same intensity of heat!