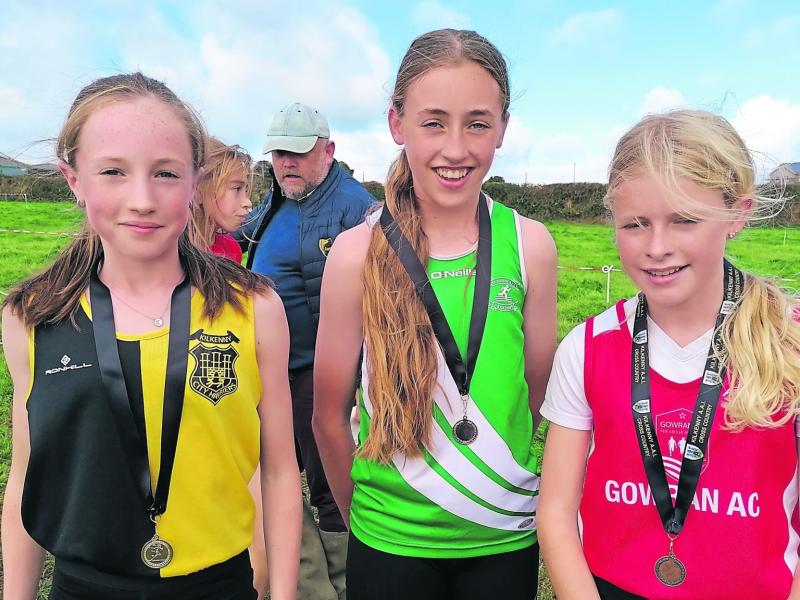 The rolling hills of Tullogher, a brilliant blue sky and lovely autumn sun provided the perfect backdrop for an entertaining day of cross-country running as the Kilkenny County Even age, Novice and Masters over-40 championships were held last Sunday.

The event was held in normalised conditions, something people are not used to anymore - but relished and embraced completely. It was great to see the crowds gather together, clubs mark out their camping spots and everyone running together, just like they used to do before the pandemic. It was clear that coaches, athletes and parents were glad to be back at a running event.

With the first 12 runners being selected on the county teams for the forthcoming Leinster Championships there were some very exciting races throughout the day, with many well contested races and some very close finishes too.

Similar to last year, it was decided to run the under-18, novice and masters races together.

With cross-country being such a tight season this year, there was little room in the fixtures calendar for the plethora of events the county normally has to offer. Part of this lies in the fact that the European Cross-Country Championships are in Dublin this year in December, which pushes back the provincial and national championships by up to two weeks, condensing an already tight calendar.

Running the races together actually proved to be quite a good idea in terms of competitiveness and participation. Those age 17 and upwards can participate in both Novice and their under-18 race and can thus run two races in one, while the older novice athletes can often be eligible for masters too.

In the case of both the men’s and women’s events it was two juvenile athletes (and Irish International athletes to boot) that won the overall races. The 16-year-old David Williams (St Senan’s) led the combined races from start to finish. Happy to stay just in front of Gowran’s Billy Coogan (also 16), he looked at ease throughout.

In the final kilometre Williams kicked into gear and opened a gap on Coogan, which he increased as he headed for home. Both athletes looked very impressive as they broke away from the rest of the field after the first lap, increasing their lead all the time. The duo - both have represented Ireland - looked swift and smooth in their racing styles. It will be an interesting season for both of them as they ramp up a gear or two in the next month.

Kehoe looked strong and comfortable throughout the race, winning not just the under-18 competition but also the novice race.

Behind Hannah, there was an appearance of yet another Richardson in the Kilkenny City Harriers (KCH) colours.

This time it was the turn of the youngest family member Maeve to impress with her running prowess. Maeve finished second to Hannah in the novice event. Meanwhile Maeve’s mother, Niamh, won the masters over-40 race, leading her KCH team to a victory over St Joseph’s.

The girls’ under-8 was won by Alesha Farrell of Thomastown with Grace Grant of St Senan’s second and Louise Harkin of Thomastown in third.

Grace Grant holds a little bit of history for the St Senan’s club. Her grandmother Ann was on the winning Novice team for St Senan’s back in 1977, while her mother Marilyn was a member of a St Senan’s club team that was second in an All-Ireland Cross-Country final back in the 1990s. Grace is the first third generation athlete to run for the Kilmacow-based club.

It was a home win for the local club St Joseph’s AC in the boys’ under-8 race with Michael Mullally crossing the line well ahead of Thomastown’s Kyle Dunne and Conal Ryan.

St Senan’s claimed club victory in the girls’ under-10 race with four of their girls in the top 10. Mai Timmons (Gowran) won the race from the fast finishing St Senan’s pair of Ellen Quinlan and Ava Hogan.

Darragh O’Callaghan (KCH) claimed the first of a family double for the O’Callaghan family when he was first past the post in the boys’ under-10 race. His win wasn’t without a ding-dong battle with the Thomastown duo of Elliot Morrissey and Danny Martin. These boys led their team to a club victory.

The girls’ under-12 event was a very closely contested race, with just two points separating the top two clubs. In the end it was Gowran who were victorious over St Senan’s with St Joseph’s AC third.

There was a good win for Castlecomer’s Aisling Phelan, who chased down long time leaders Amy Walsh (St Joseph’s) and Sinead Cormack (KCH) for much of the race. Aisling gained momentum near the top of the hill and sprinted home for victory.

Amy Walsh got the better of a tiring Sinead Cormack over the final 200m.

The boys’ under-12 race proved to be one of the most exciting of the day. St Senan’s Zak Fenton did most of the front running and looked like he was certain of victory half-way through the race. However, the taller figure of Robert Coogan took advantage of his long stride and passed Fenton going up the hill.

For the next 300m the two athletes went head to head, fighting hard for the lead. However, a slight error at the bend cost the St Senan’s athlete. Coogan, seeing the error, seized the moment and sprinted for home. Fenton surged again but it was Robert Coogan who made it to the chute just in time.

Behind the front pair there was yet another St Senan’s and Gowran battle taking place. Evan Ryan was in third place for the entire race, but a late challenge from St Senan’s Patrick Quinlan almost cost him the spot. In the end Ryan did manage to hold on to the bronze medal position.

Clodagh O’Callaghan (KCH) took that second leg of the family double by winning the girls’ under-14 race. While local girl Lilly Ryan did make some challenges to Clodagh’s lead at intervals during the race, O’Callaghan looked at ease and in the end took a comfortable victory. Both these girls are excellent athletes having previously taken All Ireland medals in their age groups before the pandemic. Lucy Coomey (Gowran) was third, with KCH taking the team victory.

Thomastown proved to be the strongest team in the boys’ under-14 race. Participation in this age group was low, with most clubs left disappointed at the turnout of their athletes, which left coaches with incomplete teams.

St Senan’s had a clean sweep of the medals in the girls’ under-16 race with Eve Dunphy shaking off Charlotte Carpendale in the sprint for home. Caoimhe Phelan was third. St Senan’s were also first and second in the team category. They had 10 athletes in total in the race, a phenomenal figure at this age for a rural club.

Both boys have some great family connections. Aylward is grandnephew of the great John Mackey (St Joseph’s), winner of many a title and is a nephew of Sinead Cummins (St Joseph’s) an All-Ireland cross-country champion in her day. Ruairi McEvoy is brother to Shay McEvoy, who represented Ireland in the 2019 European Cross Country and Track and Field Juniors. While the numbers may have been low in the race, the DNA was certainly at an all-time high.