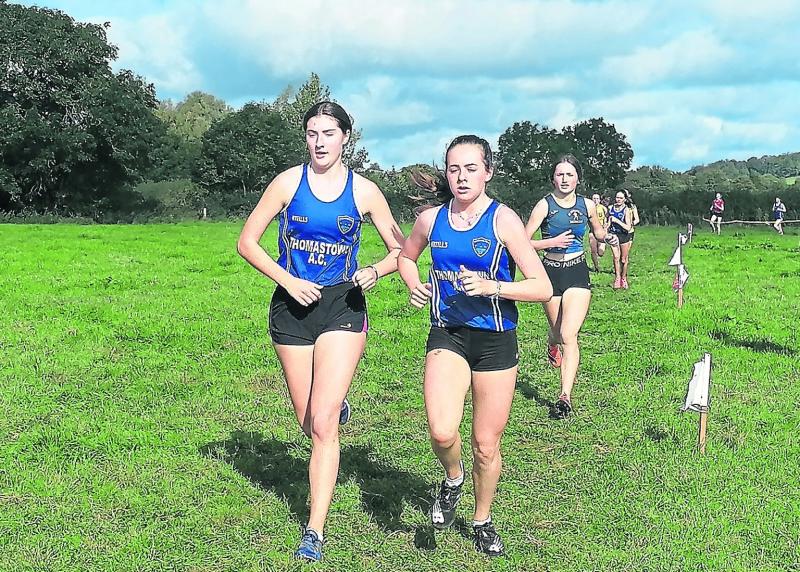 The final day of the juvenile county cross-country championships was held in another glorious autumnal day of sunshine.

Castlecomer, the usual venue, was as busy as pre-pandemic days with upwards of 50 juveniles in some of the races. The same coaches, the same starters, finish takers and officials, it was athletics as usual – a relief for everyone.

The race for the title of the best club in the county was close coming into this final day. Kilkenny City Harriers (KCH) had held a lead of three points from Gowran after day one with St Senan’s just another half point behind. After day two in Ballycurran, the positions changed somewhat, as St Senan’s overtook both KCH and Gowran - they led KCH by two points with Gowran a further eight points behind, making for an exciting contest coming into day three.

With three winning teams and three second placed teams, St Senan’s were in top form. Both KCH and Gowran had to settle for second and third respectively as the Saints emerged victorious.

There was added excitement with the announcement last week that St Senan’s AC are to host the Leinster Cross-Country on October 23 - with the first 12 finishers across the line guaranteed to make the county team there was more intent than ever for athletes to impress ahead of a big event at a home venue. With Kilkenny traditionally being a strong cross-country county, this can often be a mechanism for some athletes to get to an All-Ireland. Thus making that county team becomes more critical than ever for these athletes.

The under-7 races saw some enthusiastic budding young stars take to the cross-country field, many for the first time.

James Doherty (St Joseph’s) blasted away from the rest of the field as he solo ran most of the race and was a very convincing winner of the boys’ race. In the girls’ under-7 event there was another St Joseph’s victory as Freya Wilkinson emerged as the winner with clubmate Elaine Doherty second.

It was great to see over 50 athletes competing in the girls’ under-9 race, all keen and eager and bursting to get those top three medals around their necks.

And while only those top three spots are well earned, so too there are individual champions right down through the field, all achieving their own personal goals. Mia Timmons of Gowran won the girls’ under-9 title with Tom Doherty (St Joseph’s) taking the boys’ under-9 gold.

Both the boys and girls’ under-11 races saw large numbers of athletes line up. This time it was a place on the county team that was at stake - a top 12 finish was everyone’s target.

Mia Brennan of Thomastown took the race out and led for most of the 1,000m course. However fast finishing Emily O’Keeffe of Gowran and Katie Byrne of Barrow Harriers were not about to give up. As both athletes gained ground on Mia, it was Emily who managed to reach the line first with Mia in second and Katie just behind in third. KCH won the team event with St Senan’s not too far behind in second.

By the time the girls under-13 field took to the starting line the day had become warmer and made for lovely cross-country running. Three girls dominated the race from start to finish - Katie O’Shea (Thomastown), Kate Hayden (Gowran) and Grace Gilmartin (St Senan’s).

O’Shea took control at the top of the field early on and, try as though Hayden and Gilmartin did to catch her, O’Shea always had that bit of an edge.

In the boys’ under-13 race it looked like Gowran would fill the top four individual spots. However, Zak Fenton (St Senan’s) and Hugo Tierney (Barrow Harriers) were not about to let that happen. Both these boys upped a gear in the last 200m.

While Conor Carroll was the undisputed winner of the race, with 150m to go the race for second and third places was between four athletes. Robert Coogan (Gowran) managed to hold off the fast closing St Senan’s man, while Hugo Tierney (Barrow Harriers) had managed to pass out Joe Hayes and Tomas Carroll of Gowran. Gowran were awarded the team gold.

Charlotte Carpendale (St Senan’s) left no one in doubt as to who was going to take victory in the girls’ under-15 race. She was a convincing winner of the 3,000m event, finishing some 100m ahead of the rest of the field. St Senan’s AC took the team title. Lily Ryan (St Joseph’s) was impressive as she came through in second place.

Gowran had a clean sweep in the boys’ under-15 race with Michael Holland in first, James Kelsey second and Sam Brennan third. With results like this it came as no surprise when Gowran won the team prize.

St Senan’s dominated the under-17 events, winning not only both team sections of the race but also taking the two individual honours. Caoimhe Phelan was unchallenged in her age group. However, as the girls’ under-19 race was run together with the under-17 event she had Aine Kirwan of Thomastown to chase down. Kirwan took the under-19 title with Phelan winning the under-17 gold.

The boys’ under-17 and under-19 races were also held together. Cathal O’Reilly (KCH) was kept on his toes as David Williams (St Senan’s) and Billy Coogan (Gowran) kept tightly into him.

At the 2,500m mark of this 4,500m race Williams pushed the pace and went marginally ahead of O’Reilly and Coogan. With Williams now in the lead and all three boys still grouped together, the race for home began in the last lap. In the end Coogan and O’Reilly could not match the pace set by Williams. David Williams (St Senan’s) laimed the under-17 victory with O’Reilly winning the under-19 gold.

Masters races all over Ireland have emerged as the new trend in athletics. Numbers are up in all races, especially in the men’s events.

Peter Barry (St Joseph’s) set a blistering pace. The former Kilkenny centre-back looked as if he was running against time - as a James Stephens selector he had to attend the senior match against Dicksboro in UPMC Nowlan Park after all!

Barry won not only the over-50 masters race but also beat all the over-45s too. St Joseph’s AC won the team section in both the over-45s and over-50s, making their dominance of the masters events quite clear. Graham Bourne (KCH) was second with Paul Deegan (Gowran) in third.

There was yet another victory for St Joseph’s in the women’s over-45 race as they easily took the team title. However it was Kings River AC’s Mag Kirwan, an over-50 athlete, who led the masters race home from two of the St Joseph’s over-45 contingent, Breda Hennessey and Susan Lanigan.

St Joseph’s AC have now overtaken Gowran as the leaders in the race for the senior shield. They lead with 15 points, Gowran are next with 10 and St Senan’s have closed a little more with seven. The County Seniors will be held at the end of November and with more weighing on the top three placings in this event, things could change even more.

In the senior races there are nine points at stake for first, six points for second and three points for third. Looking at the results from two years ago, it could still mean a win for any of four teams - St Senan’s, KCH, Gowran or St Joseph’s.

The competition will be taken up a notch from now on as athletes climb the qualification ladder.

The Leinster cross-country championships are the next pathway in the journey to the national championships. Local athletes won’t have to travel too far this year, as St Senan’s AC will host the Leinster juvenile even ages, junior and novice championships.

The South Kilkenny club have kindly been offered the grounds of Mountain View for this occasion. Located just outside Ballyhale. The former golf course is now a superb venue for weddings and artesian Sunday markets.

The date for the cross-country championships is Saturday, October 23, with more details to be announced over the coming week. However, it promises to be a well-run and competitive programme, one all will look forward to.