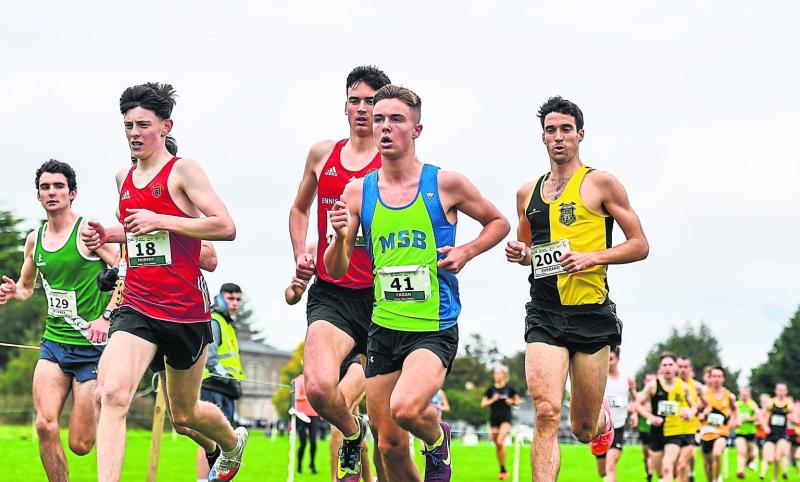 The cross-country scene has intensified. On both the international and domestic scene, smaller more localised events to test athletes’ fitness levels have now given way to the more important fixtures which bring athletes to the next qualification level.
For juveniles, this means competing in the Leinster Championships, where individual qualification means finishing in the top 12.

For more senior athletes, participating in races like the Athletics Ireland open cross-country will give the selectors a chance to examine athletes ahead of team selection for the European cross-country championships in Dublin in December.

Meanwhile, in the USA, athletes are involved in the early rounds of qualification that will ultimately lead to a NCAA appearance.
Autumn Open

One of the first competitions on the domestic scene to examine an athlete’s fitness with potential selection for the European Cross-Country Championships is the Athletics Ireland Autumn Open, which was held in Abbotstown at the weekend.

Conditions were superb at the National Sports Campus, which is also the venue for the European Cross Country on December 12. Kilkenny interest lay in the events for the senior women and men, junior men and masters.

The senior women’s race saw Bronagh Kearns (St Senan’s) compete for the first time in this event. With training going very well and not having competed in a cross-country race for two years, the St Senan’s athlete was not sure what to expect. Kearns excelled at cross-country as a juvenile before turnin her attention to the track.

On the back of an excellent fifth place in the National Senior 1,500m track and field, she approached cross-country with a cautious optimism. Not known for training over as high a mileage as her competitors, it was always going to be a trade off as to whether the high-mileage runs versus the lower mileage but more mixed pace runs would pay off.

From the gun, Kearns stayed up in the main group with Mary Mulhare, a tough competitor from Portlaoise who has made past Irish cross-country teams. When Anne Marie McGlynn (Letterkenny) and Abbie Donnelly (UK) broke away from the rest of the field, Kearns, Mulhare, Alex Millard (UK) and two other Irish athletes Aoife O’Cuill (St Cocoa’s Kildare) and Catriona Mullen (Metro/St Bridget’s) gave chase.

Over the final kilometre, emerging through the woods, Mulhare pulled away from this group to comfortably take third place. Kearns finished in fifth, a performance which is sure to have attracted the attention of Ireland’s European team selectors, who will no doubt be watching her performances in the run up to the national seniors at the end of November.

Eoin Everard will be hoping to follow up on his European Cross-Country run from 2019 with a place in the 2021 team. With the event being hosted in Ireland, it will bring that little bit of intensity in competition for the places on each team.

The race was won by Darragh McIlhenny of Bandon, who is aiming for a spot on the under 23 team. English athlete Tom Mortimer was second. Everard managed to keep in pace with the chasing pack of athletes for most of the race.

With excellent underfoot conditions, the last lap was always going to be one that tested the speed of these endurance athletes.

Not too far behind in ninth place was the much improved newcomer to the Harriers, Gerry Forde. The Wexford native transferred from Menapians to KCH this year - a good move to link in with Everard for training. If KCH can get the likes of Peter Lynch and Shay McEvoy home from the USA for the nationals, and Brian Maher and Thos Hayes back from injury, they have the makings of a podium team.

Another Kilkenny athlete who took part in the Autumn Open was Cathal O’Reilly (KCH). O’Reilly has made tremendous strides into the national ranks over the last two years and took home a gold, silver and bronze medal at the under-19 National Track and Field championships in August.

Having completed his Leaving Cert this year, he is now a first year student of PE in DCU. Adjusting to life in college has been going well. Of course for a new college athlete it is important to get the training locations and schedules set. The junior race was won by Nicholas Griggs of Mid-Ulster AC, who had a sensational win at the European Junior 3,000m earlier this summer.

He managed to stay up with the senior men for the entire race until he diverged to complete the junior distance.

Scott Fagan of Metro/St Bridget’s was some 40 seconds behind in second with Aaron Smith of Cilles AC in third. O’Reilly finished in ninth place with a good run. He still has another year at the junior ranks.

The Masters over-35 race was won by Tim O’Donohoe of East Cork AC. He was followed home by Irish Olympic marathon runners Sergiu Cibanu and Paul Pollock. Gowran’s Niall Sheehan, in his first year of masters competition, finished in 10th place. There was a large field in the master’s competition, with 69 athletes competing across all categories.

After a long absence, the Leinster cross-country championships will be back South Kilkenny again this weekend. St Senan’s AC will host the Leinster even age juveniles and novice championships in the beautiful location of Mountain View.

Set amid 120 acres, this golf club commands extensive views over the Walsh Mountains and distant Slievenamon. The course itself promises to be testing but with great terrain. St Senan’s have put a lot of effort into the course layout and the entire event.

Kilkenny, as a county, are usually one of the strongest in Leinster. With a home venue it is hoped that this will stand to the locals and produce some good results over the under-12, 14, 16, 18, junior and novice races.

The club are very grateful to Bea and Terry O’Neill for allowing their business grounds to be used for the event. With regular Sunday markets attracting thousands of visitors, Mountain View will now have another few thousand athletes and spectators joining the ranks of those who admire the beautiful grounds and setting of Mountain View.

Maps of the course will be available on the St Senan’s AC facebook page along with other details that are useful for the day.

Those arriving for the event are asked to pay attention to the traffic management system - they will be directed to parking spots by one of the traffic officers. Spectators are asked to remain in the spectator areas. There is a strict policy of no tents being allowed, a policy which has been issued by Athletics Leinster. The Cow Shed will be in operation for the event, selling soups, sandwiches, burgers, teas and coffees and other winter warmers.

KCH duo Peter Lynch and Shay McEvoy were in action at the weekend at the prestigious Nuttycombe Invitational.

Competing for Tulsa University, who are currently ranked 12th in the NCAA Division One, the Kilkenny boys had a good season opener in advance of the NCAA qualification series.

In a race with over 200 competitors, Peter Lynch finished as third scorer for Tulsa in 23rd place with Shay in 43rd and the fourth scorer. This sees a considerable improvement by McEvoy as he enters his second year as a Tulsa scholarship student.

On a different note, Aoibhe Richardson (KCH) looks set to remain in the USA for a little longer. The University of San Francisco graduate has just signed a deal with Atalanta NYC, a new professional running group formed by American athlete Mary Cain.

Cain’s professional running team Atalanta will be different to other pro running groups as it will be a not-for-profit organisation, where the runners will train as elite athletes in the morning and mentor girls in underprivileged areas of New York city in the afternoons. The programme will focus on community, education and movement.

This is a unique and magnificent opportunity for Richardson, who was part of the silver medal-winning Irish team at the European Cross Country in 2019 - a result all will be hoping she can repeat in Dublin this year.