After last week’s national action it was back to Kilkenny for the 2021 senior cross-country championships, with Thomastown providing a chilly base for last Sunday’s races. 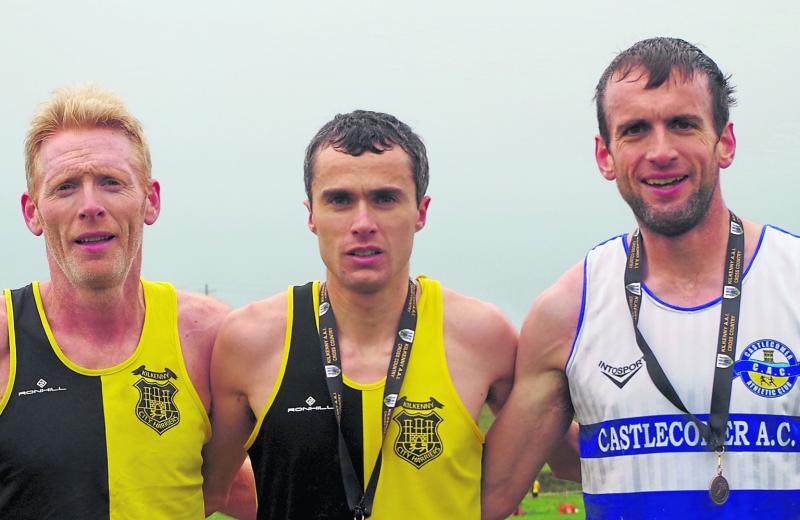 If ever a team was determined to make it to the top, the St Senan’s girls team that lined up on the start line for the county senior cross-country race was it. The aim was simple - to make it five wins in a row.

Leading the way was the 2020 county senior champion, Bronagh Kearns. Her 14th place finish in the recent All-Ireland cross-country championships labelled her as the favourite, a tag she carried effortlessly without any hint of nerves.

Back on the startling line too was Lauren Dermody (Castlecomer), who had been sidelined all year due to injuries. It was the perfect race for a comeback. Then there was Ruth Kennedy (Gowran), the under-23 athlete who has made incredible progress this year. Thomastown were also a threat to the St Senan’s five in a row bid. The club boasts a team that had been very successful through their juvenile years and were now transitioning into the senior ranks.

The field at Grennan was a tough course. A castle stood on a hill in the middle of the field and a hill stood on the course that overlooked the castle - it was a hill that no athlete looked forward to.

The makers of cross-country courses always seem to think it is a good idea to find the biggest hill possible and make the race as tough as it can be - the athletes tend to disagree. In the current era of manicured golf courses and regional parks as the favoured cross-country venues the old concept of mud, long grass and hills seems alien to the athletes. The good news for the athletes was that they would only have to climb that hill once.

From the gun, it was Bronagh Kearns who took command of the race. She eased ahead of the field with each passing kilometre and was never in danger of being caught. At the finish she was over 200m ahead of the rest of the field.

The race for second place was a more exciting affair. Lauren Dermody held the position for much of the race, with Ruth Kennedy hot on her heels. Dermody knew sustaining the distance was always going to be a problem for her and, with the injuries she suffered this year, she just did not have the mileage in her legs. Despite this she was delighted to be back again, giving the race 100%.

As the athletes emerged from the steep downhill and headed towards the river, Dermody was caught by Ruth Kennedy, who maintained second place all the way to the finish line.

The St Senan’s girls easily won the team title with the narrowest of margins between second and third - Thomastown secured the silver by just one point from Gowran. As they say in cross-country, every place makes a difference.

If five in a row was considered a great achievement for the St Senan’s women, how could people describe the feat of the Kilkenny City Harriers (KCH) men’s team who won their 10th title?

Coming into the 2021 race, the team had been unbeaten since 2012, amassing an incredible nine team titles in a row. Leaving the 2021 race behind, that tally now stands at 10 titles.

In the absence of county 2020 senior champion Eoin Everard, the mantle fell on the shoulders of Ger Forde. Having transferred to KCH in September, the Wexford athlete has been enjoying some success. He was second in the 2020 senior held a few months ago and had a good run at the national seniors in Santry.

However, the threat to claiming his first county individual victory lay in the form of Brian Maher. Known for his toughness at cross-country, in any degree of fitness Brian would always be one to turn out a big performance on the day. The multiple county title holder and former Irish International was another athlete who had been sidelined with injury this year. He was back running, but with less mileage than he would have liked.

The race for third place was going to be much more interesting as there were two Castlecomer athletes named James - James Kelly and James Morrissey. James Kelly has a great number of county bronze medals, while James Morrissey was fresh from a recent marathon in Greenland. Then there was the Gowran pair of Niall Sheehan and the much improved Dean Rowe.

The athletes would have to face into the big hill five times. It was a race for the experienced and the strong. Ger Forde knew that the only way to beat Brian Maher was to get away from him from the start. Run with Maher and he would wear him down, setting the pace before gradually moving away. Knowing Maher could take those hills in his stride Forde did not want to get caught on the hill, trying to spring away from Brian Maher.

His tactics proved to be the successful ones. Moving quickly ahead he managed to keep the lead, and though it often closed a bit on the hill he made up for what was lost on the flat. After 10,000m Ger Forde became the 2021 county senior cross-country champion – his first individual title. It was Brian Maher who was second and James Kelly who held on for third, fighting off a challenge mid race from James Ledingham (KCH). Together with their team-mates, Forde and Maher ensured the Harriers raised the county shield for the 10th year in a row.

The county B championships proved very exciting for the younger athletes, with many figuring in the medals for the first time.
These B races can often be won by future national champions who go on to represent Ireland too, so it’s an important breeding group for the development of future champions.

The medals were spread across all the clubs which is a good way to have the results. There were some good wins from Kyle Bolger (St Joseph’s) in the boys’ under-14 race with club-mate Ivan Kelly winning the boys’ under-16 event.

Most of these athletes will now finish up the cross country season, enjoy a break and come back for the indoor season. Some will be part of club or county teams as they look ahead to the final race of the season, the All-Ireland uneven ages in Gowran this weekend.

It has been two years since Aoibhe Richardson had the cross country season of her life. In 2019 she was 19th in the NCAA cross-country and earned a Euro cross selection where her 17th place finish in Lisbon saw her win a silver medal as part of the Irish team.

Her track season had been good, as she qualified for her first NCAA track and field championships. However, her dream was cut short as she sustained a hip injury, which she nursed all summer.

In spite of this the last few months have been good to Aoibhe, while her fourth place at the nationals in Santry secured her selection on the Irish team.

The former University of San Francisco student is now a college graduate and living in New York as part of the Atalanta pro team, founded by Mary Cain. Aoibhe will live and train as a professional athlete working four hours a day visiting schools on the projects. These projects involve underprivileged children - Cain hopes her athletes can make a difference to their lives. But first there is the small matter of a European Cross Country to focus on.

The European Cross Country will be held in Abbotstown, Dublin on December 12. Richardson will be in action at 3.53pm.