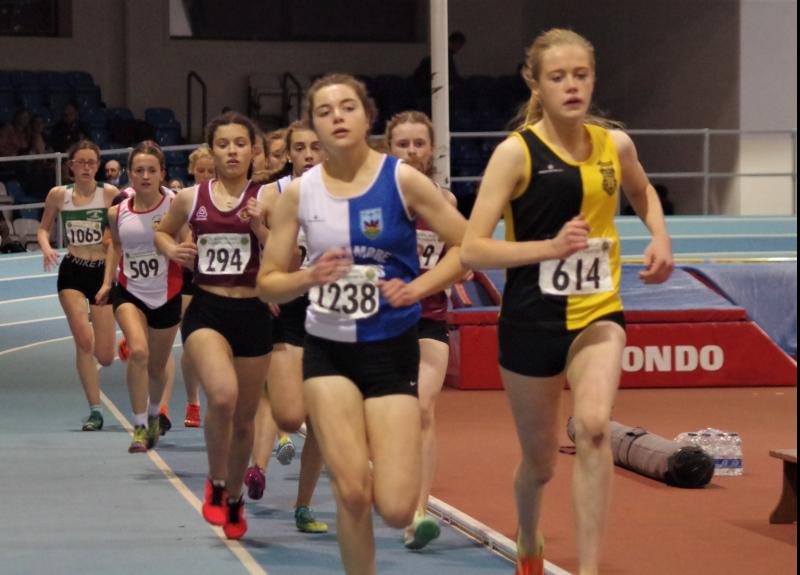 A total of 14 gold medals and a grand haul of 48 medals were won by athletes across the county at the Leinster Juvenile Indoors last weekend in Athlone.

It was a welcome return to Indoor competition after a hiatus of two years, that saw cancellations due to successive lockdowns.

It was very much business as usual as the stadium was filled with spectators and the buzz of regular competition energised the athletes as they competed in a plethora of events across both days.

While Athlone can be a very long trip for Kilkenny athletes in general (up to a three-hour journey for St Senans and St Joseph’s AC in the south) that did not deter an influx of athletes from the county making the trek.

For some this meant an early departure of 6am, not getting home until after 9pm.

Shielded from the winter elements, the indoor stadium provides a nice winter refuge for athletes against wind and rain.

This makes doing some events like shot putt and high jump a lot easier to manage, providing a good base line for early season markers.

There was plenty interest across all events for any Kilkenny spectator as collectively the clubs provided athletes in virtually all events.

There were some magnificent individual performances. 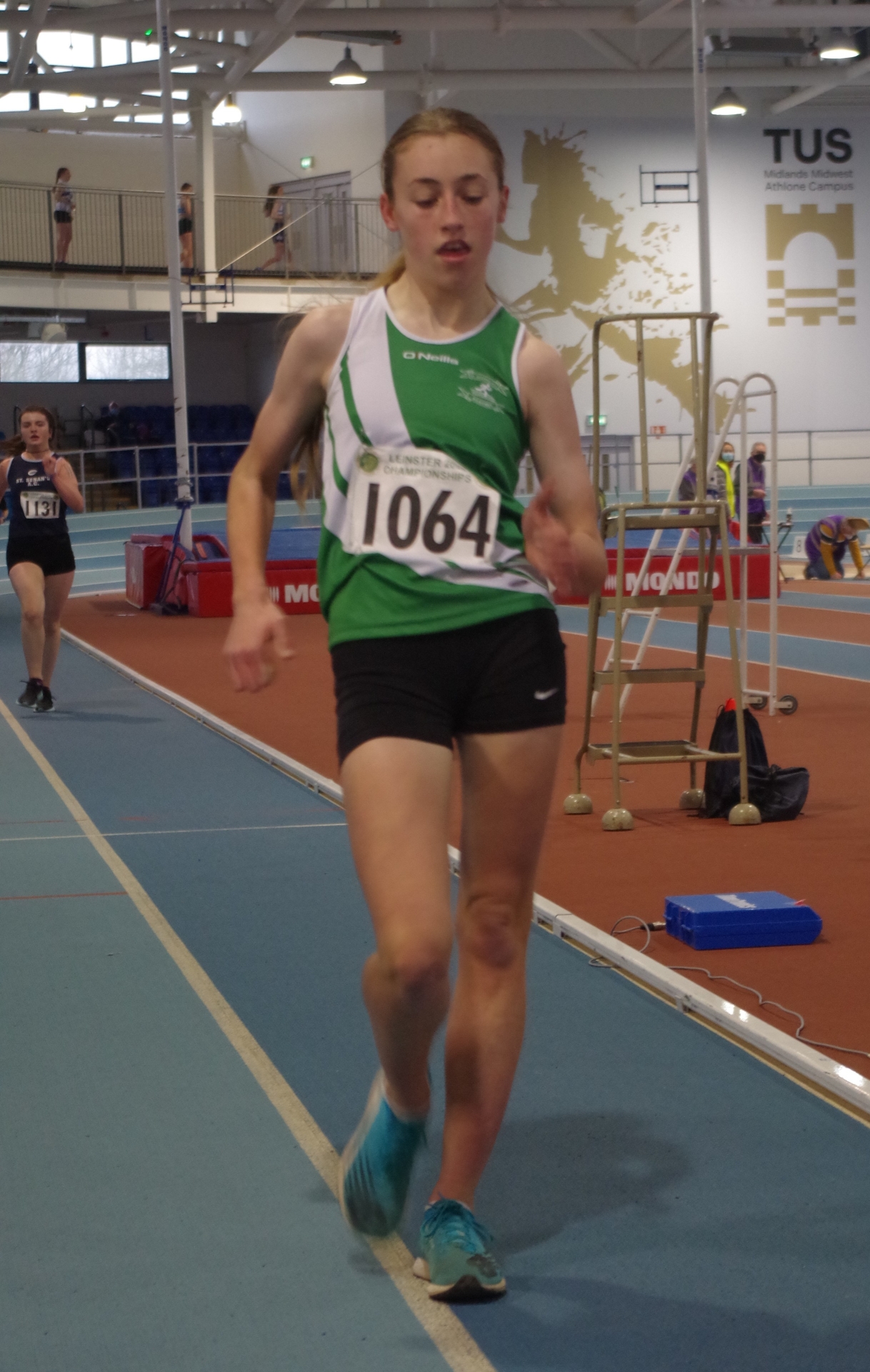 Kilkenny has long held a tradition in race-walking. A tradition that continues today. 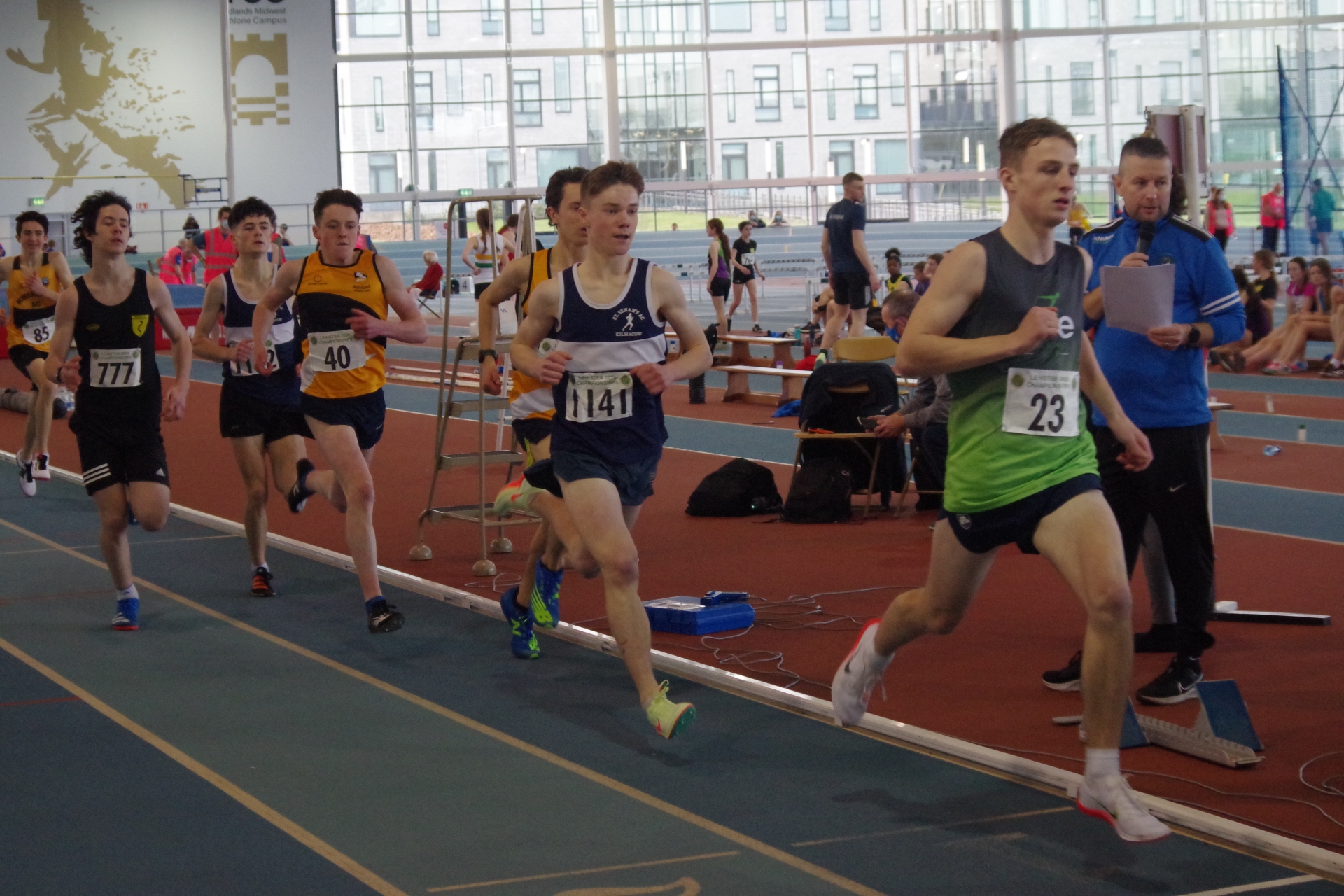 David Williams (St Senans) smashed the Leinster record in the 1,500m by three seconds on Saturday despite taking the silver medal.

A day later he finished 3rd in the 800m, in a new personal best.

The KCH duo of Pia Langton and Louisa Gilmore were victorious in the girls u16 and u17 800m respectively.

Gilmore was content to sit behind Grace Byrne of Mullingar for most of the race and produced a fast final 100m to secure the gold with half a second to spare.

Club-mate Langton led from start to finish, throwing off a mid-way challenge from Andrea Ryan.

She had a comfortable two and a half seconds victory over the Tullamore girls after the four lap race.

Hannah Kehoe (Thomastown) was up against the much improved Ruby Steuven (Tullamore) in the u19 girls 1,500m.

Kehoe made several challenges for the lead throughout the seven and a half lap races.

Steuvens who has been running well this past year, threw off those challenges and secured a 5 second victory over the Thomastown athlete, throwing in a fast final 400m.

The Daly sisters, Molly and Ellen made it a double victory when both KCH athletes won the girls u15 and 13 60m hurdles respectively.

On Saturday Molly had already been crowned the u15 60m champion with Ellen finishing 3rd in the u13 60m.

Hurdles would seem the most obvious choice of events for both girls.

Their mother Fiona was a very successful sprint hurdler as a juvenile.

She went on to attend St Leo’s University in Florida on an athletics Scholarship.

It was a weekend of silver for Ruth Crowley (KCH). She secured three silver medals when she finished 2nd to Molly in the girls u15 Hurdles and 60m sprint.

Castlecomer, AC had a surprise winner in Aisling Phelan. Aisling with her diminutive frame shocked her taller opponents when she produced an explosive start in the 60m final u13 to outsprint the opposition to take gold.

There was a clean sweep for Kilkenny in this event, with Rachel Duff (Gowran) taking silver and Ellen Daly (KCH) bronze.
Later in the day Sofia Kerr took bronze in the girls u18, 60m.

Louis Raggett (KCH) has been around athletics stadiums since he was born.

With two older sisters and an older brother who have passed through the city based club, he is the youngest in the Raggett line of talent.

Now u16, he has a string of long jump and high jump victories to his name.

Last weekend he won the long jump and finished 2nd in the high jump.

Fellow club mate Alex Cullen who has also been frequenting the athletics tracks at an early age and who also has a string of high jump titles, secured silver in the u17 high jump and was 3rd in the 60m hurdles.

Gowran AC had a large number of athletes present on both days.

They were particularly prolific in numbers across the u12 to u14 age group.

Aoibhinn Steiger took over where her elder sister Ailbhe took off prior to covid, taking a gold medal.

Whereas Ailbhe was a high jump specialist, Aoibhinn has been making her mark at long jump.

Newcomer to pole vault Ceola Leamy won gold in the girls u15 Pole Vault with Chloe Lynch 2nd u16.

There were plenty of silver and bronze medals across hurdles, high jump and shot putt.

Brow Rangers provided their usual support in the Shot Putt, with Joe and Murty Kelly acting as the officials for both days.

The father and son team have been managing the shot putt at the Leinsters for decades now, with their usual expertise and efficiencies.

Several Brow athletes across all ages took part in the shot putt over the two days with Thomas Shore getting bronze in the boys u16.

Joe Doyle (St Senans) took bronze in the boys u13. Rachel Gardiner finished 2nd in the girls u16 event.

The athletes that finished in the top three will now go on to content the All-Ireland Championships in six weeks’ time
. This will be the first All-Ireland Indoors since 2019, three years ago.

Success like that achieved at the Leinster Indoors is attributed to the dedicated work that the hard working coaches have put into the athletes.

As volunteers, these coaches give up a lot of time, to enable the athletes to be the best they can be.

No awards can justify the commitment of these coaches to their athletes.