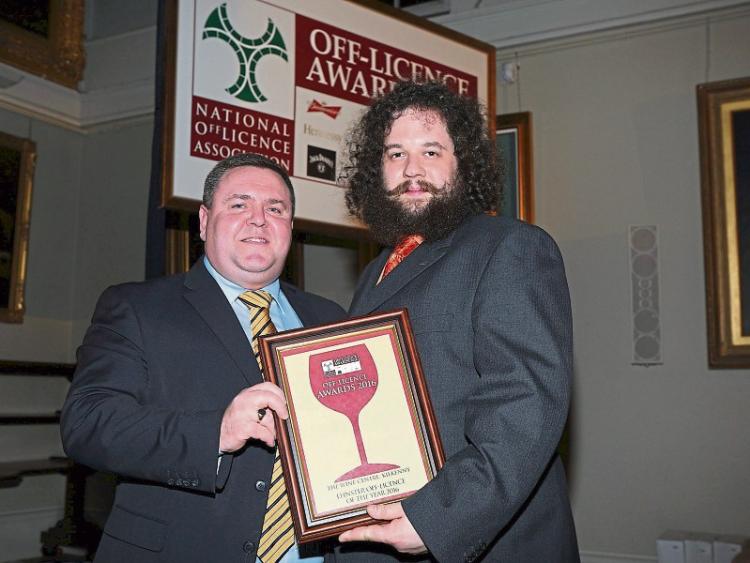 The Wine Centre in Kilkenny has won Leinster Off-Licence of the Year at the National Off-Licence Association (NOffLA) 2016 Annual Off-Licence Awards. The ceremony took place at the Honorable Society of King’s Inns in Dublin. The association also called on the Government to move swiftly and introduce the Public Health (Alcohol) Bill.

Now in their twentieth year, the awards recognise and showcase excellence in the Off licence sector The awards highlight these retailers that offer exceptional service to customers and demonstrate excellence in retail standards.

Accepting the award, Pawel Jankiewicz of The Wine Centre said, “We are delighted to win this prestigious award. We aim to continuously produce the highest standards of personal service and quality product offerings to the people in Kilkenny and this award is an endorsement of the great work of our team. I would like to thank everyone who supported us as a local business and we look forward to another successful year ahead.”

Speaking at the awards, NOffLA Chairman, Gary O’Donovan said, “The annual awards showcase the expertise of the independent off-licence sector, recognising the personal service and high quality products offered by our highly trained members.”“As responsible independent retailers, NOffLA welcomes the Public Health (Alcohol) Bill as it ensures the highest standards around the purchase and consumption of alcohol. The introduction of minimum unit-pricing and affordable structural separation will ensure that alcohol is retailed responsibly. We urge the Government to progress the Bill through its various legislative stages so its benefits can be realised in communities across the country.

“However, we believe that in order for minimum unit pricing to be truly effective, the Government needs to introduce a ban on the below invoice cost selling of alcohol. The promotion of branded discounted alcohol is used as a means to drive footfall into multiples to sell other more expensive grocery products and actively encourages irresponsible retailing which is a threat to the broader community through alcohol abuse and anti-social behaviour.”