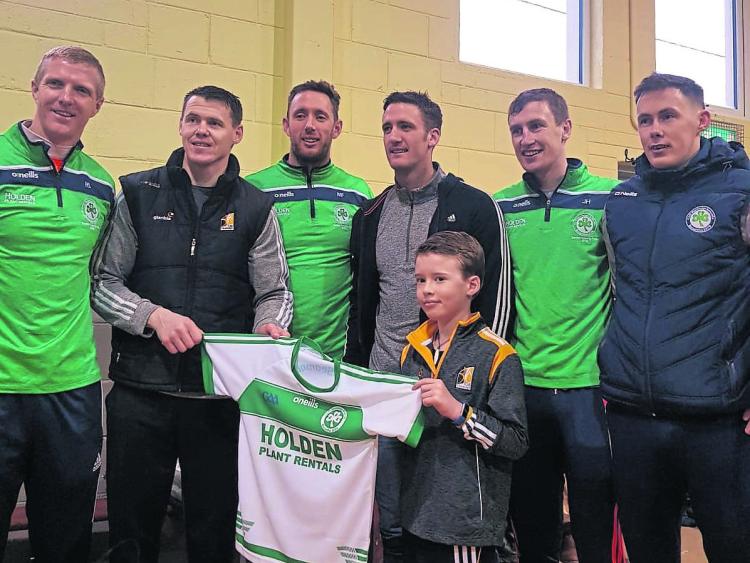 Oisin O’Neill has certainly been through the mill over the past four months and for most of November and into December many didn’t know if the popular little fellow would pull through.

For his mother Susan, dad John and his younger siblings it was a very worrying time for them as it was for other immediate family and the people of Callan.

Susan and John spent many weeks at his hospital bedside in Dublin while his siblings were cared for by both his grannies as well as close friends. During that time many prayers were offered up and a special mass was arranged with hundreds packing the parish church to pray for Oisins recovery.

He was visited in hospital by Kilkenny stars Richie Hogan and JJ Delaney who presented him with a signed Kilkenny jersey.
As Christmas approached Oisin showed signs of recovery and it was brilliant that he was able to spend Christmas at home in Callan.

He even had a few pucks of a ball in the Astroturf alley at John Locke Park with his best buddy his dad John. John and Oisin are always together and both love John Locke Park and the Lockes.

As 2019 turned Oisin continued to get stronger and as he waited for a place in Dun Laoghaire Rehabilitation Centre he returned to school at Scoil McAuley Rice.

In the past few weeks Oisin has been attending Dun Laoghaire and is really going from strength to strength.

In the past week Henry Shefflin who manages the Ballyhale team invited Oisin to Ballyhale to meet the team and some of the stars who are going for glory in the All-Ireland Club final on Saint Patricks Day.

So last weekend Oisin travelled to meet some of the team. After the meet and greet session the Ballyhale lads presented Oisin a club jersey. Everyone knows Oisin loves his jerseys and adds this one to his growing collection. We wish a continuing full recovery.