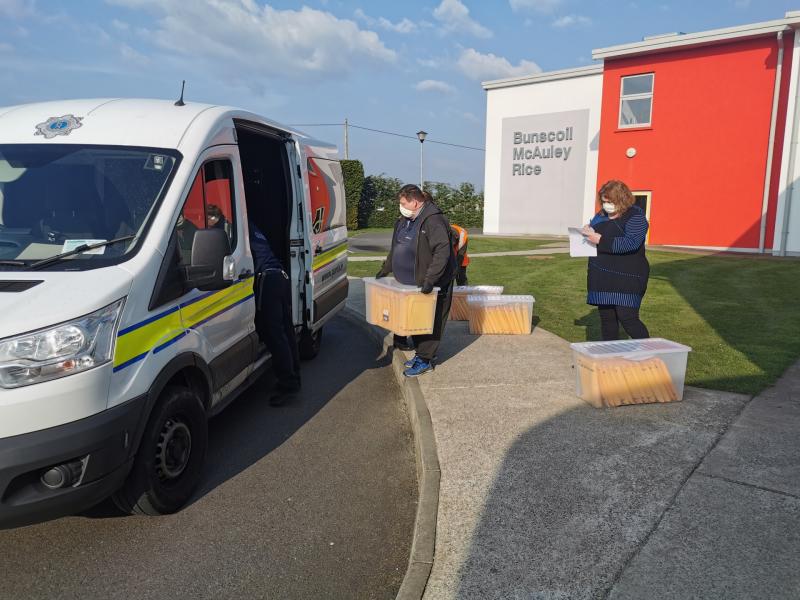 A co-ordinated community effort swung into action in Callan, last week, to make sure local boys and girls had the resources they needed while being homeschooled.

Some 450 pupils who attend Bunscoil McAuley Rice were sent home on March 12, as were primary, secondary and college students across the country. The move was made initially until March 29, but that has been extended under coronavirus regulations.

Those boys and girls only took two-week resource packs with them when the school closed.
“The school closed so quickly that a lot of children left their books in school,” John Moloney, school principal explained.

The school took advice from the HSE and that was not to reopen the school to let pupils collect books. The HSE also advised against having a central, drop-in collection point as that would mean the parents or families of the 450 pupils having to leave their homes and be out and about.
The school explored delivery options, but at €9 per child posting the books home was too costly.
That’s when John Moloney made a phone call to Paul Morrissey of John Lockes GAA Club. The club is supporting the community during the coronavirus crisis as is the Callan Peoples’ Council. Paul put John in contact with Clare Somers of Callan Peoples’ Council.

With the support of the local gardaí, led by Garda Adrian Tobin with Garda Maria Kelly and Eamon Maher bus hire and the bus from Mount Carmel Nursing Home, the operation got underway.

Delivered
Schoolbooks and resource packs were delivered to 40 volunteers who then distributed them on to the children’s homes.
Everyone involved was trained in hygiene protocols.
The resource packs were put together by the teachers at the school with special consideration for children who might need particular learning supports.

In conjunction with the resource packs the children took home in March and the packs just delivered, the children and parents can use an online resource called Aladdin Connect. It is an online sharing platform and has an app parents can use.
However, John explained, primary children need something physical in front of them to work on, and parents are often trying to spend less time on devices, as well as the fact broadband in rural areas might not be good. Feedback was that parents would love to just open a book, with guidance from teachers.
“We said it was a priority we get the books to them, with the online resources there for those that want them,” John said. “Now every child has their books.”

John said the delivery project couldn’t have been completed without everyone who helped and they were all delighted to do it.
“In Callan a simple phone call started the process,” he said, paying tribute to the community.
Advising parents who are now homeschooling, John said the main message to parents is not to create stress, there is enough going around at the moment, and everybody has their own approach to teaching.
“We are looking forward to getting them all back in good form, in a few weeks, that’s the main thing,” John said of the 450 pupils and staff.