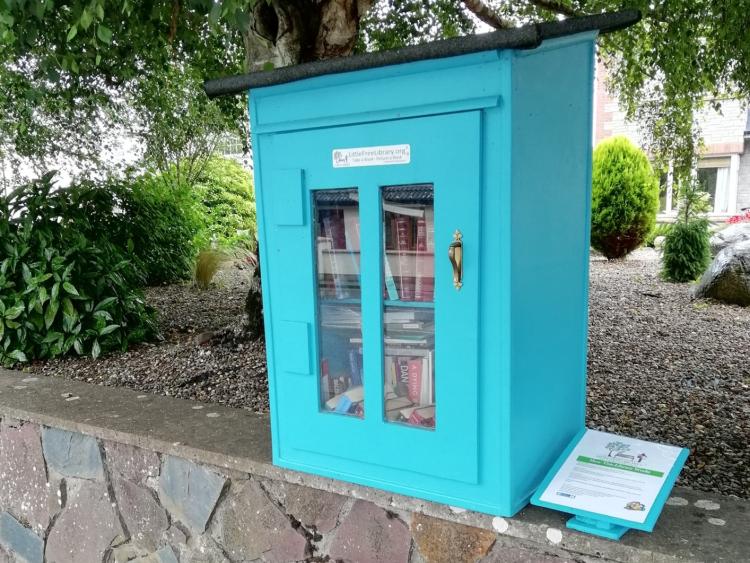 Are you enjoying more reading time while staying at home during this coronavirus ‘lockdown’?
Our library network is closed, under coronavirus social restrictions, however one book resource in Kilkenny is still open to readers.
The Little Free Library is a community book sharing box, located outside homes or community facilities. It’s a massive international, not for profit movement, with 100,000 book boxes worldwide.

Still in its infancy in Ireland, there are just nine in the country. But the good news is there are two in Callan. It works simply - take a book or leave a book for someone else to read.

“It’s being used and books are moving out of it quicker since all this, especially kids’ books,” according to Barry Somers, who set up one of the first Little Free Libraries in Ireland.

He first heard about them on a holiday in Canada, several years ago. Outside a cousin’s house was a library in the design of the main house. “I thought it was a pretty nifty idea,” Barry said. They are really popular in Canada and America, with five or six in the town he was visiting alone. They are located in parks and all sorts of places.
Doing a bit of research, Barry found there was only one in Ireland, in Dublin. So he decided to set one up outside his own home in Bolton Woods, in Callan, as “a social experiment.”

He hadn’t done wood work in a while but set about making the little ‘house for the books.’
“Originally it was really quite small, I didn’t factor in kids books tend to be much bigger. So I built a bigger one and I put the small one outside my parents’ house in Blackstaff, Callan.”

People stop daily at that second Little Free Library. Barry said his parents, Breda and Neil, tell him people are always stopping at it.
He experienced this himself when he was installing a bigger Little Free Library in Blackstaff. At least four people stopped and asked, disappointed, if he was taking it away. They were delighted to hear it was actually getting bigger.
“It’s quite popular. It fits kids’ books and has a much bigger selection of adult books.”

In the beginning Barry didn’t predict how popular the Little Free Libraries would be with kids. They are very curious about it, he has noticed, and if they saw him working on it would ask about it and how it works.
One of the things Barry has done to encourage more reading is put information about the Kilkenny County Council library in Callan into his Little Free Library. He doesn’t want to take away from that, but he wants his readers to join Callan Library. Little Library books people can “just take away and get into the joy of reading.”
Thankfully, there has only been one instance of vandalism towards the Little Library in Callan.

There are a few more Little Free Libraries in Ireland now, and Barry has had a lot of interest from community groups and people who live in estates who would like to set up their own Little Free Libraries. Barry has set up a Facebook page where people can find out more. “People definitely like the idea,” he said, “Readers like to share and pass on good stories.”
Some really nice books have been added to the libraries by people, he said. “It’s definitely a good idea, especially for areas that don’t have libraries.”

Now that his two Little Free Libraries are looking well, Barry still had plans to expand. In the future he hopes to add a bench at the Little Free Library in Blackstaff where readers can sit and enjoy the books. But not until well after the current coronavirus social protection measures have been lifted.
To learn more about the Little Free Library see https://littlefreelibrary.org/ You can also have a look at some of the book boxes people have built that are amazing!