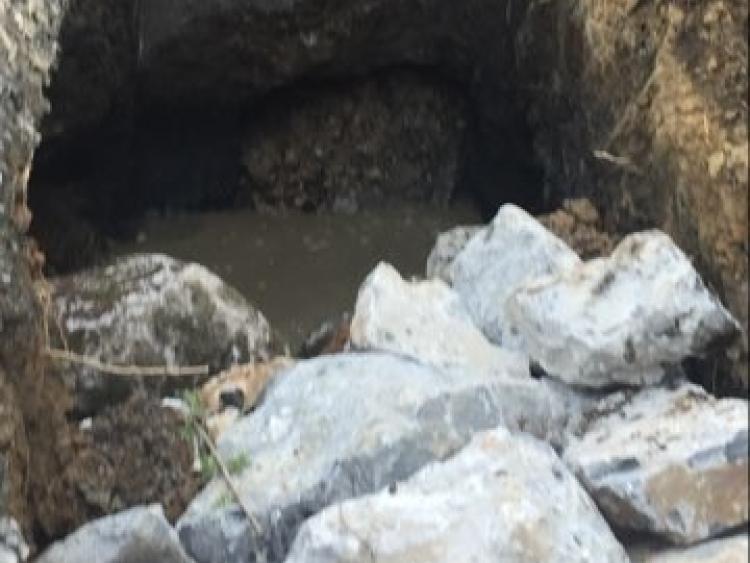 Granite rocks were used to fill the sink hole

Locals in the Moneenroe, Montheen and Croghtenclogh areas will be glad to note that the famous sink hole on the LP 1834 at Gorteen, Castlecomer is in the process of being re-instated.

The geophysical survey covered an area some 150 metres on both sides which has alleviated the concern of nearby residents.

Work is ongoing by outdoor staff members of Castlecomer Municipal District and was expected to be completed by today, Monday March 25th. However a further collapse means the work will now stretch to Thursday, March 28.

Cllr. Maurice Shortall says all are relieved to get back to normal traffic. "The road network in this remote part of North East Kilkenny is very narrow and sections like Lady's Lane had been used as a short cut during diversions. Great credit to our Municipal Engineer and staff for expediting the works and thereby ensuring safety first for all who use the road," said Cllr. Shortall.

County council engineers informed local Cllr Pat Fitzpatrick that re-filling the damaged road will take four separate layers of rock before tarring and chipping (see photo above of the first layer of granite rocks). Following settling and testing it is hoped to have the work completed and the road re-opened.

Cllr Fitzpatrick expressed his thanks to the Kilkenny County Council engineers for their work on the project and he thanked local community for their cooperation and patience while the survey and repair work is completed.

Local election candidate in the Castlecomer area, Denis Hynes, has called for Kilkenny County Council to publish an extensive map of all the old mine shafts across North Kilkenny. “With the recent sinkhole appearing in the road at Gurteen close to Castlecomer residents are worried about the situation. The sinkhole in the road related to an old mine shaft dating back nearly 200 years which appears to have collapsed. While it was lucky that the issue was spotted and dealt with quickly, there could easily have had a more serious outcome,” said Mr Hynes.