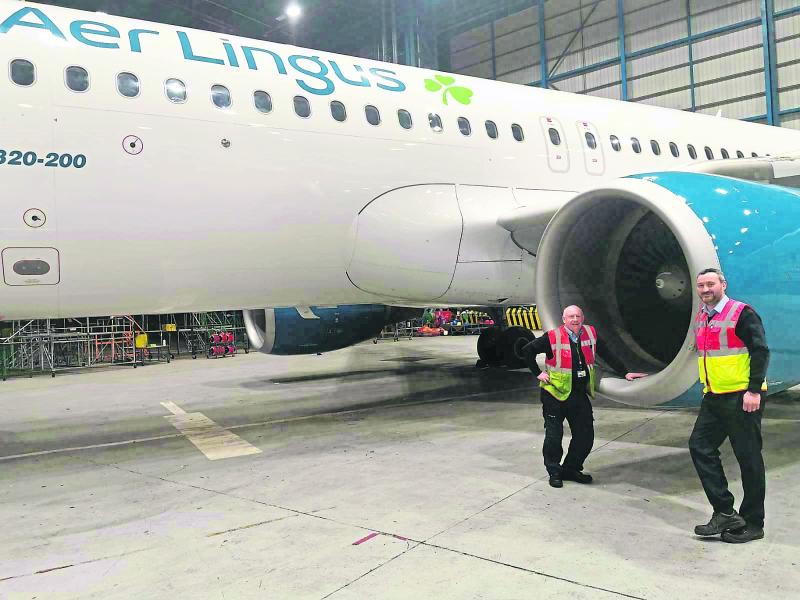 It seemed the whole of Ireland gave a virtual hero’s welcome to the first Aer Lingus critical supply flight from China with protective equipment for the country’s healthcare staff.
And that gratitude has continued as the flights leave for the far side of the world, every day, to bring back the much needed equipment.
At the time we didn’t know that one of the hard working, volunteer crews had a Kilkenny man on board.

Seamus Coogan is from Firoda, Castlecomer, and is an aviation engineer with Aer Lingus. As we go to print he is on his second flight to China.
Also on the flight is Ollie McLoughlin, a Tipp man originally he now lives in Tullogher in south Kilkenny.

Every day there are up to five Aer Lingus supply flights making the 30-hour round trip between Ireland and China. They are being flown and manned by Aer Lingus pilots and engineering crews who are volunteering during their days off from their usual work.

Seamus put his hand up to take part straight away when the Aer Lingus staff were first asked about the operation. As an aircraft approved engineer his job involves certifying the work done on the planes by mechanics, on the A300 range of aircraft.
Approximately 300 flights are due to go to China during this operation and each flight takes along five pilots, two engineers and a ‘loadmaster’ who ensures the cargo is loaded correctly and evenly for balance.

Seamus’s job is to maintain the plane and deal with any problems that arise. The flight out to China is more than 10 hours and is the quieter half of the trip. The crew can amuse themselves with movies or reading. On landing in China there’s more to do. The crew don’t leave the footprint of the plane but Seamus must oversee the turnaround of the plane. Walking around the outside of the plane he checks the fuselage to make sure there was no damage in flight, checks wheels and brake fluid, engineering and hydraulic oils, making sure all are ok for the flight home. Seamus certifies any work that is done to ensure a log book paper trail.
The engineers travel with the plane because Aer Lingus don’t have any support staff in China.

The plane is loaded with pallets into the cargo area and if boxes are loaded into the passenger area that takes a bit longer as it has to be done by hand. They're usually on the ground in China for four to six hours.

On the flight back, which takes just over 11 hours, Seamus is more busy. He has to inspect the load every 15/ 20 minutes if there is cargo in the passenger compartment. This is part of the Irish Aviation Authority rules. Then it’s back to Dublin airport where the Irish Army collects the equipment for distribution.

Seamus, who served his time as an apprentice fitter with Kilkenny County Council, joined Aer Lingus in 1990. He expects to be on at least two more flights to China as part of Aer Lingus’s critical supply operation.