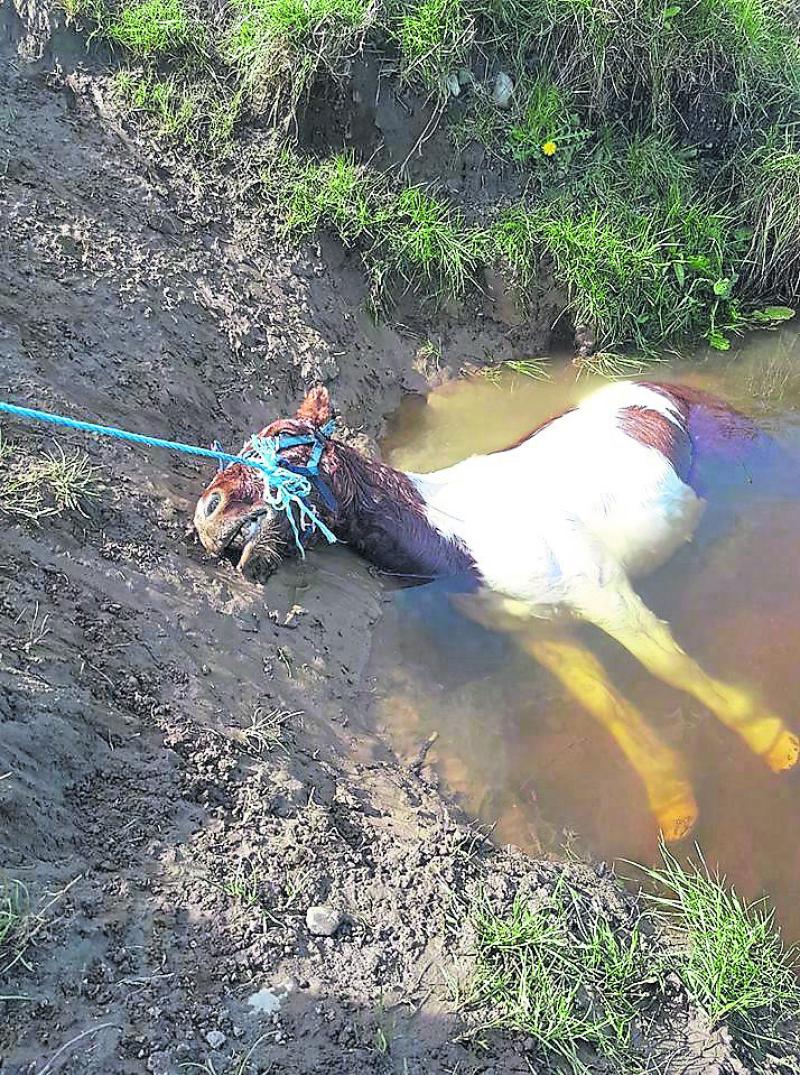 A horse who drowned in the River Nore earlier this year

There is something seriously awry in Kilkenny at the moment - there is a sustained and terrifying litany of torture and abuse against animals that is truely frightening.
For years this newspaper has highlighted case of sporadic animal cruelty - most notably horse cruelty. There have been campaigns and protests and byelaws introduced but in recent months the frequency has escalated.
Dogs were deliberately set on goats in Callan, a horse drowned in the River Nore, horses were tied to railings in sweltering heat for hours with no water, a cat was deliberately thrown to dogs, a horse was euthanised following a collision and a rabbit was deliberately killed.
The gardaí have come under criticism from certain quarters but credit where credit is due. They have made arrests, prosecuted people in relation to animal cruelty, carried out inspections, overseen operations where large numbers of animals were seized and responded to reports of animal cruelty.
It is difficult to comprehend the mindset of the people who are responsible for these acts.
This newest trend whereby family pets are being targeted is beyond frightening.
It is easy to lay blame, point the finger and shout out vacuous words. The solution is not easy - the perpetrators need to be caught in the act.
Gardaí are investigating a recent incident where a number of calves were killed after a jeep was deliberately driven at animals at speed. In this incident the jeep was subsequently found burned out a short time later and an arrest is expected. A juvenile has also been arrested in relation to horse cruelty which resulted in a horse been euthanised on Monday.
People need to be the eyes and ears for the gardaí if the perpetrators are to be brought before the courts and held answerable for these heinous crimes. If people are acting suspiciously or you feel under threat in any way contact the gardaí and if you witness animal cruelty, report it.
Social media has some advantages but one disadvantage is that it facilitates citizen journalism and this can be a dangerous thing. While often information is shared in a beneficial way to highlight incidents, worryingly many comments are inciteful and abusive. This is not helpful to anyone.
One city community has decided to set up a residents group in the wake of recent incidents and this is to be commended. Some residents at Fatima Place, St Teresa's Terrace and Emmet Street have formed a group and will circulate leaflets in the neighbourhood over the coming weeks. A meeting is also planned to take place over the coming weeks.
In the meantime we need to stand together and united as a community and take small but definite steps to eradicate this horror that is being inflicted on our beloved animals.
Reporting any incidents of abuse is paramount. Call the gardaí, make statements and get the people responsible before the courts so that justice can be served. This is the best way of handling what is going on. Racism and incitement will not solve anything, it will only polarise our community.
Animal cruelty in Kilkenny has become a national issue with national media reporting on recent incidents and a Dublin-based documentary maker is currently planning on producing work on the recent spike. We all need to work together and report any abuse so that those responsible will be punished and this sorry saga will come to an end.