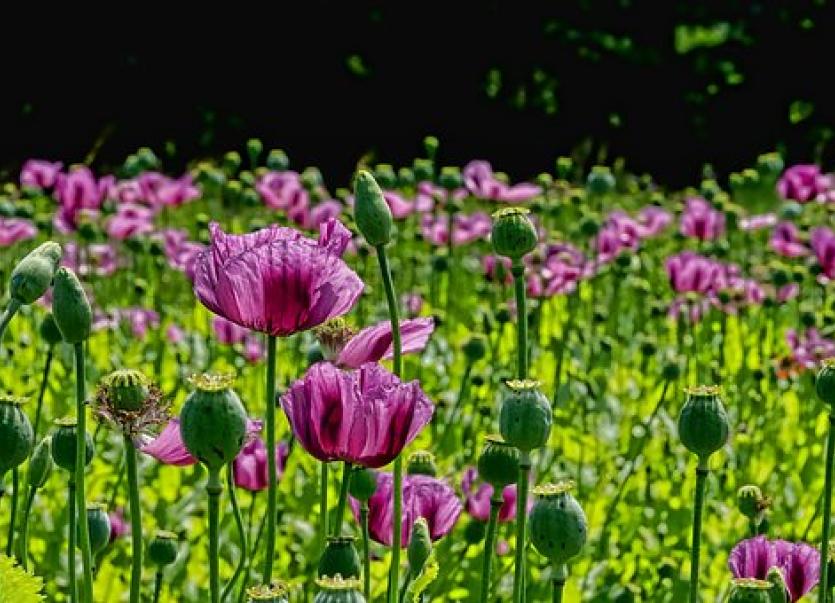 So, you have a bit of fallow garden. It might be an ex-vegetable bed: It could be that you decided not to go with as many vegetables as you have previously grown. It might be that you have just moved into a new house, or put in an extension and the disturbed ground has not yet been smartened up or even decided upon. It could be that you have been renovating an area, digging out the weeds and getting the ground ready for replanting – but the calendar has caught up with things and the job is not yet complete. Yet the summer is almost upon us. Is there a good temporary fix that can be achieved? Is there something that can be done to put on a summer show to enjoy and live with until the end of the autumn, when you can again continue to do the renovation?

The answer, is that because plants are so infinitely versatile – yes.

The answer lies in an annuals, bulbs and tubers bed. This is a bed made up of annual plants that will flower and die in the next few months, as well as some that grow from bulbs, which after they have flowered and died down, can be easily dug up, cleaned off with a minimum of fuss and stored for a while until needed. Add in tubers, mainly in the shape of dahlias which will flower all summer and you can lift, like bulbs when the first frosts come. Together this lot will deliver the makings of a colourful bed that will perform for the humans, the bees, butterflies and hover flies all summer, before you get back to the job of renovating or long-term planning next winter.

I have one area that I began to renovate this spring. All the bind weed  was dug up and disposed of it. The perennials were up rooted too, cleaned of weed roots and then homed temporarily into pots.

In this sort of clean-up, the ground has to be left for months so that any remaining bind weed roots can begin to grow, making themselves known when they can again be dug out. I know this looks like a foolish amount of work to anyone fond of the weed killer, but there you have it. I will be that happy fool. Gardening is as much process and mess as smart finished look.

The first main dig went well, as so far there is no sign of new bind weed shoots. Although they will show. There is no doubt about that. What there are plenty of however, are alliums.  I could not possibly dig out all the Allium spheracephalon and Allium aflatuense that were such a feature of this border. And they are all there now, growing apace and getting ready to flower. They will start later this month and go all summer. In between them I have inserted pots of Dutch irises that were dug up. Their deep purple, white and yellow flowers will look great alongside the pinky purple tennis ball flowers of Allium aflatuense and the dark plummy, purple eggs of the Allium spheracephalon.
As for the annuals, a satisfying number of opium poppy or Papavar somniferum seedlings appeared in the dug-up bed. They are growing like Billy-O right now. In the middle of the summer they will come out in metre-tall stands of pink poppies in a range of singles and doubles, dark dirty pinks and pale watery shell pinks.

The dahlias will be inserted in between this lot later in the month: They are a motley crew of tall and black Dahlia ‘Nuit ‘Ète’,  as well as taller species Dahlia merckii and a few pinks and whites, the labels of which the birds have spirited away for some reason known only to themselves. (There is a magpie nest somewhere that must resemble a modernist nightmare of spiky white plastic and aluminium plant labels. Pity the poor chick raised in that  homage to hard edged avian architecture.)

Anyway meanwhile back in the border, the dahlias without names will add perfectly to a busy flower party, before they too are dug up to be stored over winter.

There will be need for staking and a bit of pulling of stickle-backs or cleavers out,  as the season goes on but as long as the general picture is colourful and pretty, in its temporary shape, all will be well.

The last of the Free Gardening Talks in The Castle takes place next Tuesday, the 7th of May.

As in previous years, this last talk will be an outdoor walk around the Castle Park, in the company of  the informative and knowledgable Colm Mangan, Head Gardener.

The walk begins at the earlier time of 7.15pm. Meet in the courtyard. Wrap up well and wear sensible walking shoes.  As always, entry is free.