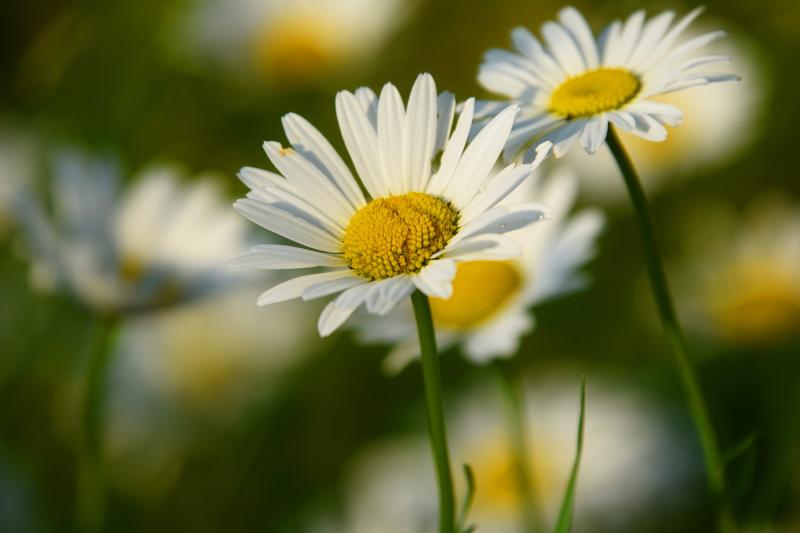 It's summer – apparently. Although this year, we have already experienced more rain on the 4th of June than throughout the whole month of June 2018, but there are good things to shout about regardless of the weather – and anyway the ground needed that drenching.

The first congratulations go to Kilkenny County Council, and in particular its verge cutting staff. You people in High-Viz and on top of tractors - take a bow. I was driving out to Castlecomer last week when I was stopped by a High-Viz man. There was a verge-cutting tractor just ahead of him, mowing the long grass along the side of the road. When I was allowed to pass, I drove on, noticing as I did, two grand clumps of hesperis (Hesperis matronalis) or Dame’s Rocket growing on the verge. The lovely white flowers waved about over the long grass. Sometimes rocket flowers come in pale mauve. They are always sweetly scented however, regardless of colour.

There was also a clump of ox-eye daisies. I assumed that when I drove back, both would have been levelled, along with the grass.

Everywhere around the county you can see it -  the wild flowers are being allowed to grow and flower. Along verges, ditches, and on the slopes along the ring road around the city, there are daisies, orchids, rocket, all sorts of  dandelions and buttercups, rattle, cow parsley, butter cups and flowering clovers.  The bees and other pollinators are busy and happy and the place looks great – good weather or not. As we all know, every little helps.

There has been a walled garden attached to the Deanery since the 1700s, and before that too no doubt, as the site goes back to the founding of a monastery in early Mediaeval times.  In any case the garden had become overgrown and a bit lost, on its perch above the city.

Since arriving here, only a matter of months ago, Dean MacDonnell has, alongside his many official duties, been spending his spare time discovering and smartening up this old, lost garden.

I met him a few weeks ago, to take a stroll along a series of  garden paths that were invisible only a year ago. Dean David managed to uncover the old network of paths that once gave the garden its shape and definition. With help, he dug up the old kerb stones, some rough boulders, some dressed stone, and repositioned them along the newly found paths. Once levelled cleared and lined, a fresh dressing of gravel was raked over to produce a smart restored set of paths that again give the walled space a permanent structure to build from. The lawn was also resown and the young green sward is thickening out nicely.  At the back of the garden, there is a sort of wilderness made up of mature trees, including some old yews. Taking  his cue from these ancient trees, he planted a yew hedge to divide the space further as well as giving some height.

Old carved stone finials and plinth, found in the undergrowth were righted and placed at cross paths and central points. In the past there were borders planted  along the walls. Clearing the bind weed from these will be a job of work for this year. In the meantime, thoughts are being put into possible climbing plants that might suit the walls. An almost lost, historic city garden is now set to grow again.

Meanwhile, across the Coach Road that leads up to the Deanery and Cathedral from Dean Street below, there is another horticultural development:
The old Deanery Orchard is being restored. This will open, possibly at the end of the year as a little park, complete with old and new Irish and Kilkenny apple trees. The Cathedral Administrator, Elizabeth Keys is to be thanked for her work on this  project. Watch this space.

One more good thing to expect from the Cathedral is the Plant Fair that will be held next Saturday the 15th in the restored Deanery garden.

There will be plants, a tea tent for a cup of tea and a treat as well as baked goods to bring home, antique stalls, a barbecue and live music. It starts at 11 am and will run until 4pm.Anyone who wants to buy plants should arrive early. The good stuff always gets snapped up first.  You can then sit and congratulate yourself with tea and cake  having bagged a nice bit of plant swag. Eva Holmes, the wonderful gardener and nursery woman of Darver Nurseries, will be in charge of plant proceedings.