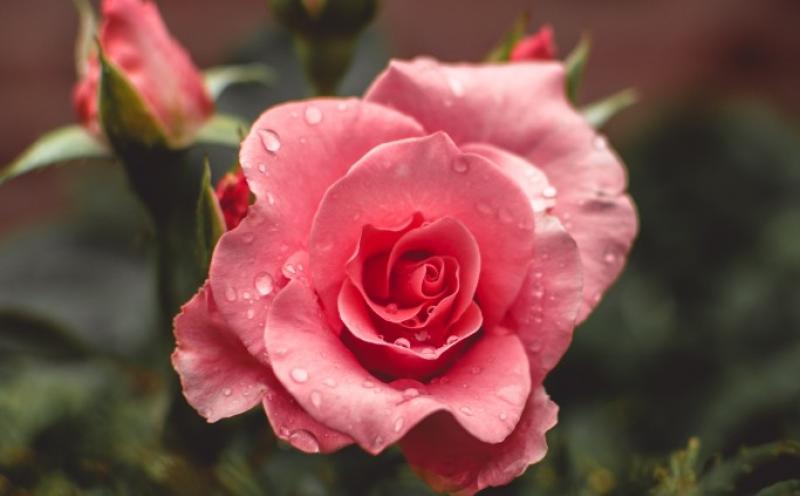 There is something about gardening that brings out the obsessive. For years I had a particular rose in my sights. It lived on a stretch of road that I drive along every few months. It was a real beauty, an explosion of fat pink roses spread over the ditch in front of a ruined cottage. If there were no cars backing up behind me I would slow down to look at it as I drove past.

Several times I thought to stop and take a cutting, but it was always at the wrong time of the year or the line of tractors and buses behind prevented me pulling in. So that plan was generally put off.  My inner coward always seemed to loiter about too. I wouldn’t mind but I would not have had to trespass to take a cutting: The bush stood out on the boundary. In any case, I continued to enjoy it, in this fleeting way, looking forward to seeing the flowers from early summer each year and enjoying them as they romped along in fabulous rude health year in year out.

It was a great plant, particularly as it managed so well under a regime of complete neglect. I told myself I should really get a cutting. Then, one day I passed and the cottage had clearly been bought, knocked, cleared away  - and with it the gorgeous rose. I cursed the builders and new owners from a height.  They could have left it. It was not in anyone’s way. But I cursed myself too. I still drive past, fairly furious: I could have saved a little part of that grand old plant but I failed it – and now it is gone. Lost. I don’t know what variety it was. It might have been something rare. Even if it that were not the case, it was certainly something special.

It came to mind today as this is the time when it would have been possible to take a hard wood cutting from it.

I have several braver friends, who make it their business to take cuttings from roadside roses, roses struggling to get on between brambles and nettles in abandoned cottages. ‘Rescue Roses', is they call them. These are roses that have a special romance about them. And anyone willing to get scratched or stung in the middle of a blackberry and nettle patch in order to take a cutting deserves whatever they can extract. There are growing collections of these roses to be found in several public gardens around the country, like folk museum installations.

Taking hard wood cuttings does not only apply to roses. This is a method of propagation that can apply to a great number of shrubs, a useful option to consider for anyone with a large garden to populate and a small pocket from which to finance the operation.

It is however, a good idea for anyone with a hankering for an old favourite, unknown rose, perhaps in their granny’s garden, or in the garden of a friend. In all fairness, if the variety is unknown, then it cannot be hunted down in the garden centre or in rose catalogues, so the only way to get a plant is by cutting.

I was speaking to a woman with a troublesome rose bush recently. She is attached to it and it has a good flower, but it was planted far too many years ago in a completely unsuitable place, right in under a huge hedge where its conditions are grim. Yet because it has been there so long it cannot reasonably be expected to survive being lifted and replanted elsewhere. A solution for her might be to take a hard wood cutting and propagate the rose. It can then be planted in a more suitable place: She will continue to enjoy her actual rose, while the old tatty remains can be left to their own devices or removed.

Start by taking a cutting, using a sharp secateurs, about the width or thickness of a pencil and 25cms long from this summers growth.

Make the bottom cut beneath a bud and the top cut above a bud.  Remove the foliage and make a note of how the buds face upwards.(Keeping the cutting the right way up is obviously important.)

Some people dip the bottom of the cutting in rooting powder, but I have not found it necessary.

Cut a sharp sided trench about the depth of a spade in a sunny sheltered place in the garden. Stand the cuttings, bottom side down, against the straight wall of the trench. Backfill  and firm the soil around the cuttings. There should be a stalk about 10 cms above ground. Mark the row with the name of the variety or at least a description of the plant – ‘pink climber’, ‘white shrub rose’ etc.

The cuttings should root over winter and sprout some leaves in spring. Transplant them after a year. The success rate is about three out of five. Good luck.