'Sleeping' with the enemy! 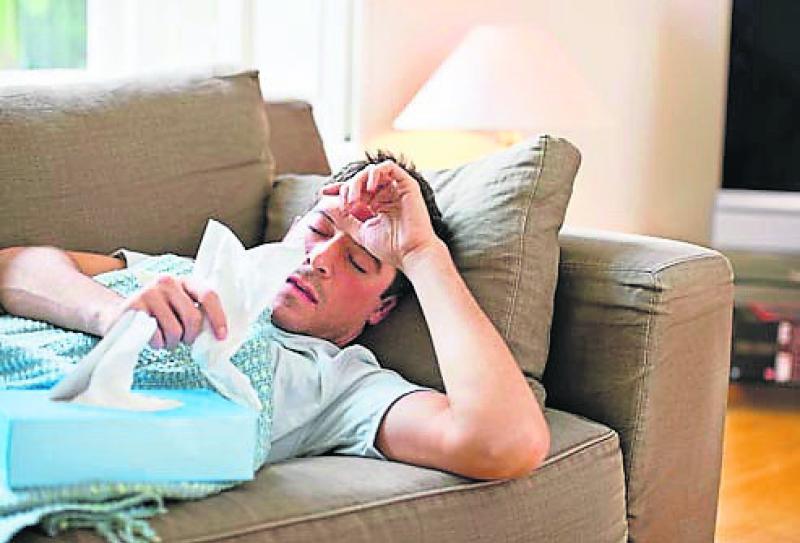 There’s a flu going. Actually it’s not going. It’s stopped. It’s here. Very much here. Gorging itself. Stuffing itself. Feasting on us poor humans. Us clever humans. Intelligent humans. Sophisticated humans. Humans who can split atoms. Send men to the Moon. Land machines on Mars. But who can’t subdue the flu! But then it’s hard to subdue something you cannot see.
Hands up anyone who has ever seen the flu?

Now I don’t mean that wreck of a human curled up on the couch with runny nose, bleary eyes, weary bones, sneezing, coughing and complaining. That’s your husband. He’s just the physical symptoms of the flu, the man flu - the worst possible strain of flu on the planet!

Meanwhile does anyone know what the flu actually looks like? As often as I’ve had the flu, as often as my body has been host to this ‘bug', I have never actually seen the thing. Not that I want to.

I’ve met enough unsavoury characters in my life without being introduced to a gangland of germs who think nothing of hijacking your body for a week leaving you flaked out, feeble and fragile for days afterwards.

Still and all though I have to admit to a certain curiosity as to what the flu really looks like.

Having never looked down a microscope or looked up Gray’s Anatomy (which can’t be pleasant) I assume that these hardened little criminals are despicable, ugly creatures riddled with puss and God knows what.

Perhaps not. Maybe these little blighters are ridiculously pretty, handsome even, by germ standards. Who knows, perhaps some of them are the ‘Miss Worlds’ of the virus world. Which puts a different complexion on having the flu. I mean it doesn’t seem half so bad being host to a million Miss World flu germs. Or is that being sexist?

Which begs the question – what gender is the flu? Is it male, female, undecided, indifferent or a bit of the lot! And could you figure that out by looking down a microscope?

I am of the opinion that the flu is decidedly female. A seasoned seductress. A femme fatale of the highest order. Observe her in action.

Unlike a male virus who will boldly, and bluntly, approach you and say to your face: ‘Can I sleep with you for a week or two?’

The wily, feminine flu is a much smoother operator. Instead she sidles up to us with a civilised sniffle or two, or a little tickle in the throat, all of which seem harmless, all of which we stoically entertain but before we can say ANTIBIOTICS we’re in bed with the dame. And there we remain until such time as she has had her achy, shaky, shivering way with us.

In the meantime as family, friends and acquaintances succumb to the flu I find, miraculously enough, that I’m still standing. Running actually. To the chemists. For everything and anything that offers me relief and keeps the flu symptoms at bay. And keeps the pharmacist solvent well into the next decade.

Which raises the God awful thought that maybe the infamous flu is a conspiracy. A commercial conspiracy. A laboratory manufactured virus released into society for no other reason than to line the pockets of pharmacists and GPs.

You think it couldn’t happen? I tell you – the truth is out there.

Meanwhile this army of germs, known collectively as the flu, has laid waste half the population of our city. Cromwell didn’t wreak as much havoc and devastation.

It can be only a matter of time before I myself am laid low. I wake in the mornings now with one nostril stuffed and leap from my bed thinking: ‘Oh my God, I’ve got half the flu.’ Now half a loaf may be better than no bread but half a flu is ten times worse than the full flu.

Half a flu is what really wrecks people. Half a flu we think we can handle. But we can’t. The flu, femme fatale that she is, always gets the upper hand and before you know it the two of you are in the bed together, moaning and groaning, and working up one hell of a sweat.