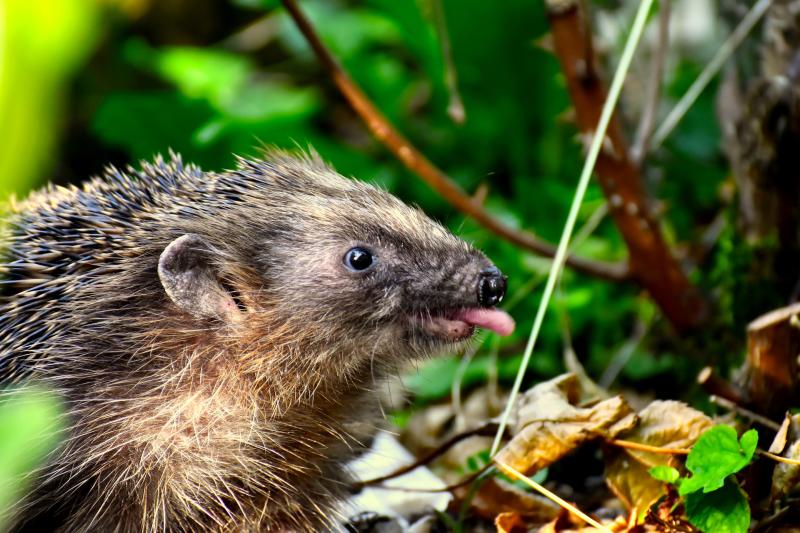 Let me be upfront and honest here – I don’t really know if the hedgehogs were on their honeymoon. Okay? But they were up close and personal, very up close and personal. Cheek to cheek, well snout to snout really though I didn’t go too near, some things you don’t want to intrude upon.

Some things are private after all, even in hedgehog society. They were snuggled up, curled up, close and comfy just beneath our beech hedge. Not a bad place to curl up by any means but not exactly the bridal suite either although where the bridal suite in our back garden might be located, I have no idea.

Then again, now that I think about it — perhaps it’s beneath the Cherry Blossom tree over on the west wing (the sun sets over that part of the garden) where I spotted two humans lying prostrate and locked in a passionate embrace some years ago. I spotted them as I pulled the blind in our bedroom before slipping into bed beside my beloved.

“There’s a couple making love beneath our cherry blossom tree”, I said very quietly (as if they, the couple, could hear me!)

“There’s a couple making love beneath our cherry tree.”

“But she’s probably a child, a teenager, she could get pregnant.”

“Jesus, you want me to go out and give them a lecture on safe sex or maybe you’d have me dispense contraceptives to them, not that there are any in the house and besides it’s a bit late for that now.”

“I suppose you’re right,” my wife sighed as we curled up, close and comfy leaving the cherry-blossom couple to their fate.

I left the hedgehogs to their fate also but remembered coming upon one hedgehog a few nights before. It was snuffling around the cat’s dish which was empty unfortunately.

Feeling sorry for it I slipped out the back door as silently as I could, and emptied a pouch of cat food in front of its curled up body. One hour later the hedgehog and cat food were gone. And so, putting two and two (an appropriate number in this case) together I reckon the hedgehog I fed that night concluded: this is not a bad place to dine, this is where I am going to bring my beloved on our honeymoon.

Then again it might well have been a first date, or second date, but whatever the hell it was – it was intimate, it was touching, it was romantic. At least I thought so. Oh, a small question: how do hedgehogs make love? Carefully. Very carefully.

In the meantime the scams were coming fast and furious last week. I had no less than four emails from An Post, purportedly, informing me that my parcel from Amazon (I ordered nothing) could not be delivered due to an unpaid custom charge – the parcel could be delivered ‘tomorrow’ by paying a rather small amount with my credit card.

I checked this with An Post. Scam. Then there were two phone calls, one from a gentleman with a foreign accent, the other from a lady with a foreign accent telling me that my PPS number had been used in some transaction or other and I was being investigated for money-laundering and fraud!

To resolve the problem I had to press 1 and provide some personal details I presume. I didn’t. Scam. And then my wife received a text (very officious looking) purportedly from her bank informing her that a suspicious online transaction had taken place on her credit card.

A link was offered which she ignored but rang the bank to confirm her suspicions that it was a scam. It was. So, beware folks because so much online shopping is going on and because PPS numbers are very much in use thanks to Covid vaccinations these criminals are tapping into our vulnerability.

Be careful because just like Covid, this scamming is another dangerous virus that can seriously damage your financial wellbeing!