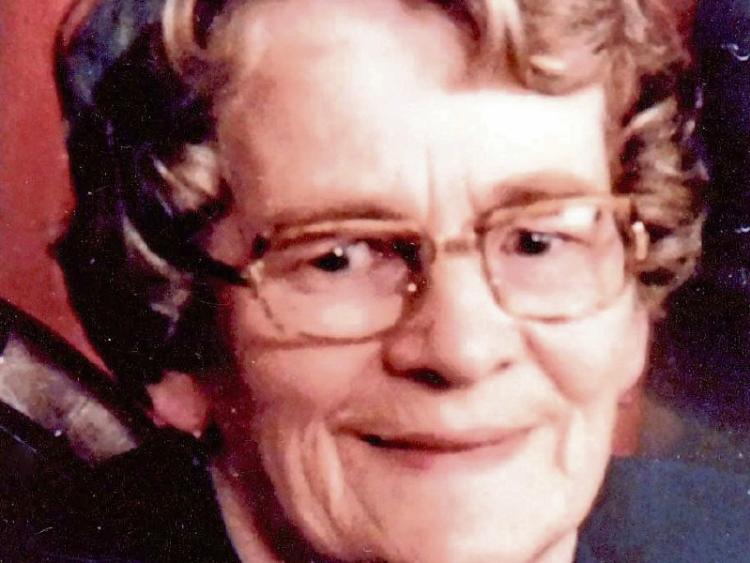 The late Bridget Joy, nee Wall, of Tybroughney, was born in Knockanaffrin, the Nire Valley, Co Waterford, on the 7th of August 1928. The Nire was a place she would always love, describing its people as “the most homely and the warmest people you will ever meet…” She herself embodied those qualities throughout her life.

Bridget had two older sisters, Mary and Peggy, and a younger brother, Wattie – all now deceased. Her mother, Josephine Wall, died a young woman on the 25th February 1939, when Bridget was four years old.

Her widowed father Jack Wall got a job in Millvale Creamery in the County Waterford hinterland of Carrick, and brought his motherless family to live in nearby Seskin, where their new neighbours took them to their hearts, showing outstanding kindness and friendship which was never forgotten. Bridget spent the rest of her growing-up in Seskin, and also went to work in Millvale Creamery — but she always returned to her beloved Nire on her summer holidays.

Young Bridget’s future husband proved to be John Joy of Tybroughney, from over the south Kilkenny border close to Carrick. He was well-known as the owner of a threshing machine and combine harvester and did a lot of work in that general area of the three counties. The couple met and fell for one another and on 27th September 1950 they married in St Molleran’s Church, Carrickbeg.

As a young woman of twenty-two years, the newly married Bridget found herself in a house full of men in the Tybroughney homestead: her husband John, his two brothers Thomas and Richard and their father, also Richard. The two brothers eventually moved to England and it was Bridget who nursed her husband’s father, Richard senior, until his death. From the time of her marriage and move to Tybroughney she quickly made friends, travelling around the countryside on her bicycle.

Despite her Kilkenny household, Bridget was and remained a staunch Waterford woman in her sporting loyalties. She longed to see Waterford win another All-Ireland hurling final, as they had done over Kilkenny back in 1959...

Bridget was blessed with eleven children: Richard, John, William, Mary, Josephine, Kathleen, Anthony (RIP), Declan, Brendan, Paul and Kevin. She would eventually have 24 grandchildren and 4 great-grandchildren. All those children in turn loved to visit Tybroughney where they knew they were assured of chocolate and sweets in store for them…

Bridget didn’t have an easy life. When she was four she had lost her mother, Josephine Wall, and her father Jack Wall died, 36 years a widower, on the 7th May, 1975. Bridget worked hard to rear a large family in tough times. Her husband John died in 1983, followed in 1992 by her son Anthony. He was the one who could make her laugh like no one else could and his death was the hardest cross a mother could suffer. She weathered it all, armed with her great faith and devotion to the church, especially the Franciscan order and St Anthony.

Her gifts included her sense of humour and wit, appropriately dispensed without any airs or graces. A visitor one time looked for a saucer with her cup of tea, only to be told “The only one who ever got a saucer in this house was the cat!”

Bridget Joy worked hard all her life. Children coming in from school were welcomed by the aroma of her brown bread and apple tart. Farm work meant that at certain seasons there could be twenty strong men who needed feeding. She loved occasional visits from her husband’s two sisters who were nuns — Sister Canice from France and Sister Anthony from the north of Ireland. Preparations for such visits often saw Bridget getting all the children off to bed and then decorating walls and rooms up to the midnight hour.

Her turkey-rearing enterprise at Christmas time was more about gifts than money. Everyone collecting a turkey was brought in for a Christmas drink and a present. The economics of the enterprise made little sense but it was her personal and unstinting way of marking the feast of the Nativity and she loved the ritual of people calling at the house. Another one of her virtues was the ability to remain calm in handling the strong personalities of her eleven children and defusing personality clashes before they could erupt.

In recent years she began to experience the loss of some of her great friends whose deaths she felt acutely, but her deep faith assured her that she would be reunited with them all in the next world, along with her deceased loved ones. There would be no end of tea and chats and apple tart in Heaven…

In her final declining years she had the full and caring support of her large family, especially her son Declan who lived with her. Bridget was never in hospital in her life. Perhaps the bicycle kept her in good health. On Wednesday 22 November 2017 she had her dinner, went to town to do some shopping, retired to bed and then passed away ten minutes later in the faithful presence of her beloved son Declan.

Throughout the whole region of the three counties and beyond it, Bridget’s death evoked widespread comment, regret and sorrow, along with sincere appreciation, as manifested in the crowds who flocked to the removal and funeral.

People spoke of her unfailing generosity, her gentle strength, her instinctive piety, her hard work and her humility. One former farm worker was heard to testify — “You could go into that house with your working-boots on but still be welcomed and go away full…”

Bridget’s funeral Mass in the Church of the Assumption, Piltown, was celebrated on Sunday 26th November 2017, followed by burial in the adjoining cemetery. Family thanks were expressed to Very Rev Fr. Paschal Moore PP and other officiating clergy; to Darragh Walsh, undertaker, Dr. John Flanagan and all who attended.

Bridget Joy was an outstanding woman, wife and mother who lived a long and exemplary life spanning three counties and in her 90th year. She leaves her family and extended family a priceless legacy of unselfishness and love that came straight from her heart’s core. The light of Heaven to her soul.