Delighted by support he has received in local areas 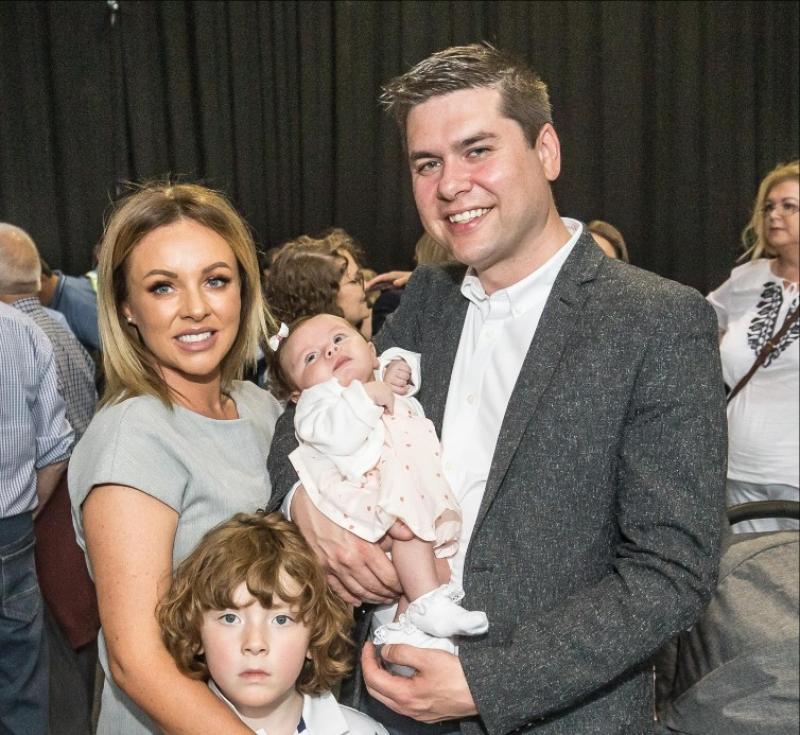 Cllr Andrew McGuinness pictured at the count this evening with partner Carol, and children Phoebe and Jack

Climate change was a big issue on Kilkenny City doorsteps in the run-up to the local elections, according to potential poll-topper in the Kilkenny Electoral Area Andrew McGuinness.

The sitting Fianna Fail councillor, son of TD John McGuinness, looks on course to top the poll in Kilkenny City according to tallies.

"The tally result is really positive not just for me but for Fianna Fail in general," said Cllr McGuinness.

"To be honest, I'm really overwhelmed by the amount of people who have come out and supported me. It's really positive for the party in general."

Perhaps reflecting the 'Green Wave' that has seen Green Party candidates set to be elected across the country, Cllr McGuinness said that the environment had been consistently brought up at doors on the canvas.

"Climate change was actually a big one," he said.

"I have to give credit for Malcolm Noonan for getting the vote he got as well today. But climate change definitely came up, and took me by surprise to be honest on the doorsteps of Kilkenny.  But there was no big single issue like the last time, with the Central Access Scheme, we didn't have that this time."

I asked Cllr McGuinness if he was surprised by the vote indicated in tallies for his uncle, independent candidate Eugene McGuinness, and if he felt it was a threat to his vote.

"I'm not surprised by anyone's vote really. I have great respect for anyone who puts their face on the ballot paper. As I said during the campaign, Eugene is a different candidate to me. He's independent, I'm Fianna Fail, and I wish well to everybody."

Cllr McGuinness was first co-opted in 2002 and ran in his first election in 2003. This is his fourth local election. When asked to reflect on his previous term and its highlights, he said animal welfare and bridging the gap between the public and the council were significant.

"I don't necessarily think it's about getting something across the line," he said.

"But I think bridging the gap between local politicians and the general public is something I take great pride in, with the constituency office open along with my dad John McGuinness on O' Loughlin Road. I hold public clinics every week, my mobile phone number is public property, Facebook - whether it's good or bad - whatever the commentary there it keeps me informed. I think that bridges the gap between local politics and the people in general, and I take great pride in that."