Suspense served up in abundance 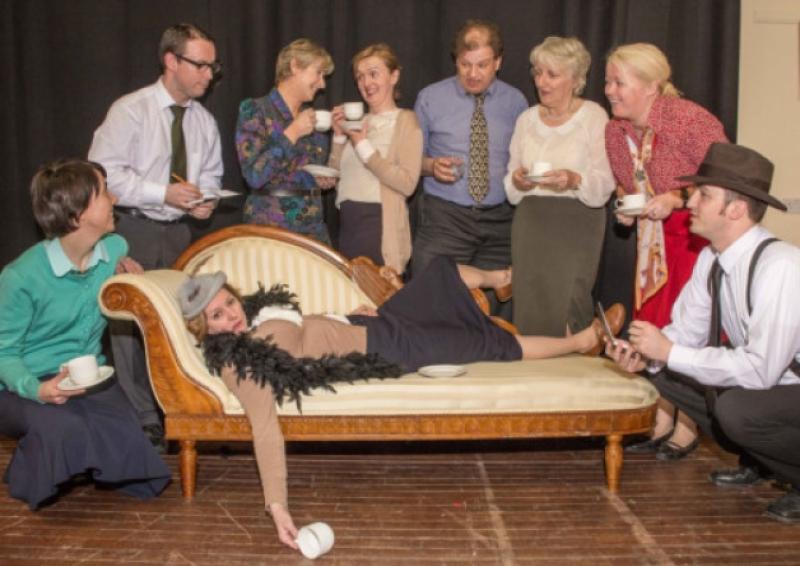 A JOINT colloboration between two local theatre groups promises to have punters of the edge of their seats as murder and mystery are interwoven in a very special production.

A JOINT colloboration between two local theatre groups promises to have punters of the edge of their seats as murder and mystery are interwoven in a very special production.

The Barn Owl Players and KATS join forces for a very special production of suspense when they perform Anyone for Tea and The Patient.

CB Gilford’s Anyone for Tea opens at midnight in Captain William’s office, played by Jim Carroll.

Jim hails from Rathdowney, Co Laois but has been a member of the Barn Owl Players since its inception through the Outreach Office of Barnstorm Theatre Company.

Jim has taken part in many one acts at The Barn – including “Dumb Waiter” – and has treaded the boards of the Watergate Theatre with the Barn Owl Players in “The Whiteheaded Boy” and “Lone Star”.

Paul, who is originally from Cork, has been living in Thomastown for the last nine years, and with a keen interest in music and drama he decided to enrol in the Adult Theatre Club run by Barnstorm in September 2010.

His love of the “excitement and nerves of treading the boards” was heightened by involvement with one acts and monologues at the Barn.

Our attention is then moved to the lovely spinster ladies of 909 Sycamore – here we met six ladies of a slightly older generation.

The owner of the house is Hildegarde Hodge, played by Sheila Kirby.

Sheila, who comes from Limerick originally, has been with the Barn Owl Players since 2007 and although she has stayed mainly in the background, she has taken to the stage in one act productions at the Barn and also “The Whiteheaded Boy” at the Watergate, but the lure of a good murder mystery was too much for Sheila to resist.

Miss Amantha Abernathy is played by Ann Jones, who is from Carlow, living in Waterford, but working in Kilkenny.

She started with the Adult Theatre Club in September 2010, looking for a “new challenge” and has found an enjoyable social outlet the feeds her creative side.

Miss Elizabeth Ellsworth is played by Claire Sheehan, who comes all the way from Newcastle.

Claire is another member lured from the Barn Owl’s background by our murder mystery theme.

KATS Theatre Group – who are the other side of the wonderful Mid May Murders weekend in the Barn - are delighted to present Agatha Christie’s “The Patient”.

Set in the hospital room, the play opens open to see the typical Nerd, Lansen – played by Niall Bambrick, who is back with KATS again after he intimidated us as the Bouncer in the one act plays of last November “On the Outside” and “On the Inside“ and – Nurse Bond, wonderfully played by Caitriona Barrett.

Lansen and The Nurse set the scene immediately as they bicker about the electrical device that we hope will save the day later on.

Fergal Millar, who captivates as always – this time as Dr. Ginsberg – has treaded the boards a number of times, and is fresh from his role as Samuel in Kilkenny Musical Society’s wonderful production of Pirates of Penzance.

Fergal is joined by Inspector Cray, who is played by the Keith Grogan.

Keith is making a welcome return to the stage with KATS after his absence since 2002.

We soon learn that Jenny Wingfield (nee Ross), while not instantly recognizable due to her extensive injuries, being well wrapped up in bandages, is played by Maria Murray, a well-to-do married lady who, while suffering from illness, “fell” from her balcony.

The main suspects are played by four local actors – the popular duo of Sarah Brennan, who plays Emmeline Ross, and Kevina Hayes ,who plays Brenda Jackson the secretary of Jenny’s husband Bryan.

Both worked so wonderfully together in “On the Outside”, and are again paired, although things might not be as cordial this time.

Sarah and Kevina are more than ably assisted by KATS veteran Declan Taylor, who again delights as the somewhat loving husband Bryan Wingfield, and the immature and ignorant William Ross, played by Shay Lawlor.

With accusations of adultery, attempted murder and a number of plot twists, there is no shortage of entertainment and moments for the audience to answer the question themselves WHODUNNIT?

Midsummer Murders will take place nightly at The Barn from May 9 to 11. For more information, or to book, contact 7751266.