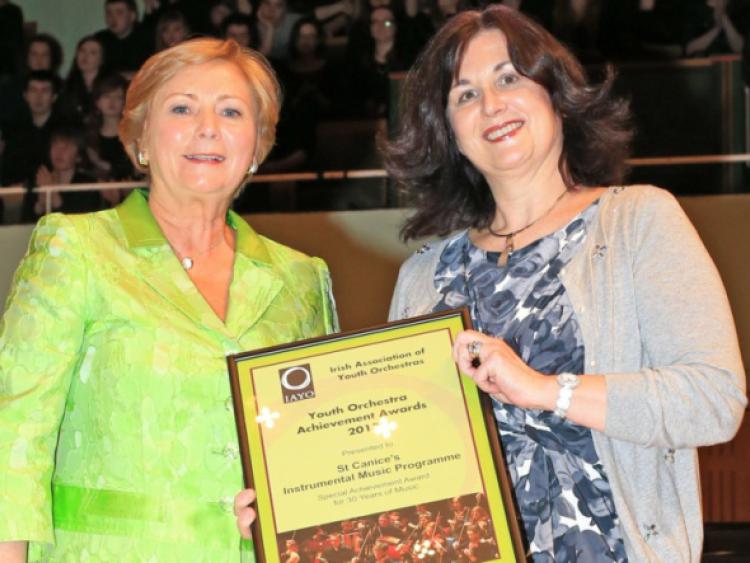 On Saturday night Regina O’Leary accepted a Special Achievement Award from the Irish Association of Youth Orchestras (IAYO) in recognition of 30 years of music by the pioneering St Canice’s Instrumental Music Programme.

On Saturday night Regina O’Leary accepted a Special Achievement Award from the Irish Association of Youth Orchestras (IAYO) in recognition of 30 years of music by the pioneering St Canice’s Instrumental Music Programme.

Minister for Children, Frances Fitzgerald, presented Regina with the award on stage at the annual Festival of Youth Orchestras Concert at the National Concert Hall in recognition of the contribution the music programme has made to the development of youth orchestras. Since the foundation of the programme in 1983, thousands of Kilkenny children have been given the opportunity to learn how to play a musical instrument and to enjoy playing music. The programme has blossomed and grown over the years and today over 400 children are actively involved in music in the school. The programme also has award winning orchestras, jazz bands and several chamber music quartets.

Regina said she was delighted at the recognition given to St Canice’s Music Programme. “Little did Peggy Carey and I ever think what would become of the tiny start we made in 1983- the programme is a testament to the dedicated music teachers team, our wonderful and supportive principal Maria Comerford and teaching staff, the unprecedented commitment given by amazing Parents’ Committees both present and past and the gifted talented children who have passed through the doors of St Canice’s over the past 30 years” said Regina. She expressed huge praise for and gratitude to the fantastic team at IAYO- especially Allin Gray and Bertie Buckley.