With the closure of post offices, shops, creameries and garda stations, pubs in rural Kilkenny remain 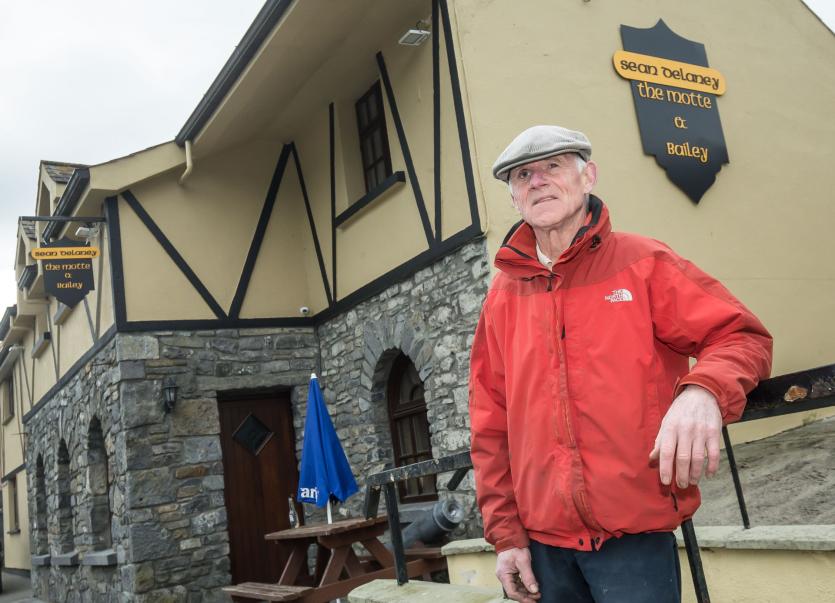 Sean Delaney outside the iconic family pub in Kells Village

It’s not politically correct or hip to be seen to be romanticising alcohol consumption.
But going to your local pub is more of an anthropological exercise, a social thing, a conduit for positive community involvement; a last bastion in isolated, non-urban environments around Kilkenny with the demise of rural post offices, garda stations, shops and creameries.
The ongoing decline in rural Ireland got me to thinking about our relationship with pubs. I thought back to my wonderful childhood, living over the family pub in Listowel, Co Kerry and the many characters who frequented the place and the fun we had.
In the 1980s when most of Ireland was in two channel land, there was an American comedy, tv series, called Cheers.
The signature tune for the show which starred Ted Danson and Woody Harrelson was a song and the last line was; ‘Cheers, where everybody knows your name.’
That kind of explains the relevance and importance of having a place to meet up at night.
No one wants to be seen to be glamourising drink or supporting alcoholism which is a social epidemic, but there is something comforting about going to your local where you are comfortable and people know and like you.
For many people, the pub is a place of refuge, a place to meet pals, to inter-act, feel human, encounter like minded people, have a laugh and to feel part of something; where you can be yourself or as Bruce Springsteen put it; ‘to get that human touch.’
Let’s be honest, drinking at home is no fun really. You can’t beat the atmosphere of your local pub and even though everyone gives out about the price of drink and publicans in general, everyone loves their own individual pub owner.
That’s why, it is so important to preserve that culture and no where is this more important than in rural areas and that is why it is good to report on a number of pubs, which have reopened in rural areas in recent times much to the delight of local people.
Instead of spending another Sunday night at home looking at yet another box set adults should be going out, chatting to their neighbours, sharing life experiences, solving common problems and helping people out.
Even if it's just for a bit of bitching, paradoxically, it is a positive thing to do.
I think that more and more, as a result of modern living, people have become isolated in their own homes, cut off from their communities and living off and on social media.
The pub can address that and a good publican like Anne Brennan in Johnswell can pull people together like she did lately for the road hurling in the village.
I think being a country publican is like having a vocation, you have to be made for it, and I’m thinking of people like Richie Mackey in Gathabawn, Fred Malzard in Stoneyford, Sean Delaney in Kells; Billy Ryan in The Rancher’s Return, Coon, Rory in Sheerin’s of The Ridge; Bill Ryan in Kilmanagh, the list goes on and we will return to these ‘custodians of culture and country life’ in the near future.
The good news is that people are taking a chance and re-opening pubs in Kilkenny villages; it looks as if the Harvester in Danesfort will reopen; Shirley’s in Kells has been sold and will soon open its doors again.
Power’s of Tullahought is going well since it reopened six years ago after being closed for a long number of years.
Our major towns are well served by a dwindling number of licensed premises but it is in rural areas where there is most concern.
Another great spot is Mackey’s of Gathabawn where Richie Mackey is going well with comedy clubs and great grub served, and it is keeping life in that village and its hinterland alive.
In Johnstown, Barry’s is going great thanks to multiple all Ireland hurling medal winner, Billy Fitzpatrick.
There is only one pub left in Kilmoganny. Dunphy’s on Chapel Street and it doubles up as a ticket collection point for plays performed by the Shrughawadda Players in St Eoghan’s Hall in the village.
Another major success story is the re-opening of Ryan’s of the Cross at Crosspatrick and it is doing a great trade at weekends.
It is being run by a very popular local man and was purchased last year by an American, Carl Engebreth who plans to open a distillery there.
The future for rural Ireland is not all doom and gloom but like any rural enterprise, you must support your local pub or it will close.