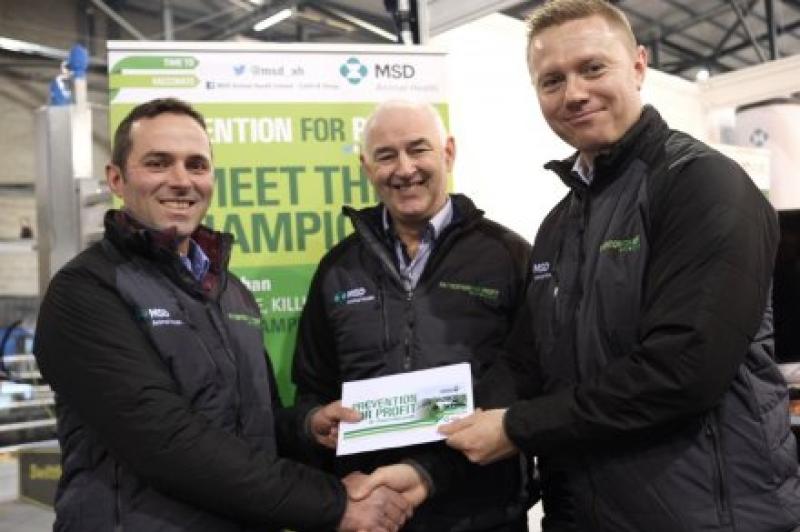 Eamon Sheehan being presented with his award

Eamon Sheehan, who runs a high performing dairy farm at Cuffesgrange, was last week named as the inaugural winner of the Prevention for Profit competition.

Initiated and run by MSD Animal Health, the competition is aimed at dairy farmers who are maximising their profitability by focusing on four key pillars of production- nutrition, genetics, management and animal health.

Eamon, who switched from suckler beef production to dairying just five years ago, beat competition from all over Ireland to take home the top award.

He was presented with the award, which consists of an all-expenses study tour of dairy farms across Europe at the Dairy Day of Punchestown, Co. Kildare on Tuesday of last week.

Eamon and his wife Lois took over the family farm from his parents Eamon and Maureen. They have two children Rachel (6) and Julia (4). Up to 2012, they had a herd of 120 suckler cows.

They started the switch to dairying in 2013.

They are milking 150 cows this year and will calve 185 next spring.

"We were looking for excellence across a wide range of areas and Eamon scored very high in all vital areas of high-performance dairy farming." said Mike Magan, chairman of Animal Health Ireland, a member of the judging panel.

Evidence of the high standard of management can be seen from the fact that 85% of the herd calved within six weeks last spring.

Calves are vaccinated against clostridial diseases. He also operates a rigid screening programme for Johne's disease. He was described by Dr. William Minchen, ruminant business unit director with MSD Animal Health, as a leading example of the growing number of progressive farmers who now use prevention rather than cure in their approach to herd health.

"This is demonstrated in the dramatic increase in the use of prevention vaccines across Ireland, which has now more than doubled during the past decade" Dr. Minchin said.

"This sets a solid platform for healthier animals which require less antibiotic intervention" he added.

Outstanding grass management is another hallmark. One-fifth of the farm is reseeded every year and grass growth is measured each week.

In 2017, the Sheehan farm grew 15.4 tonnes of grass dry matter/ha. This year the figure is around 10/ha., evidence of the impact of the difficult spring weather and the summer drought, particularly in the south east.

Through purchasing a substantial amount of silage, he is confident of having enough feed to see him through the winter.

Eamon acknowledged the enormous support of his parents Eamon and Maureen and his full-time farm assistant Aidan Foley in enabling him to undertake his Nuffield studies where he travelled around the world.

His success in the MSD Animal Health Protection for Profit competition will enable him to further broaden his horizons and experience European dairy farming at its best.