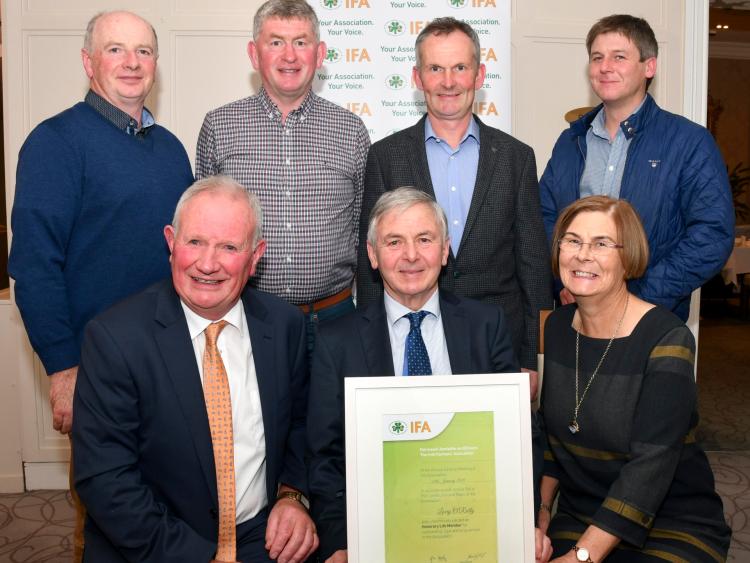 Larry O’Reilly with his wife Anne after receiving Honorary Life Membership of the IFA by Richard Kennedy. At back from left, Fabian Jacob, Lar McEvoy, Michael O'Carroll and Larry’s son, James

When Kilkenny ceral grower, Larry O’Reilly, addressed any forum, you could hear a pin drop. He captivated. One of the most progressive farmers this country has ever produced, he was always looking ahead and a thorn in the side of financial institutions who tried to treat farmers unfairly.
He loved the theatre, local history and above all positive and forward looking people.
On Monday night the Ballyragget man who farms at Grange received Honorary Life Membership of the IFA, the highest and greatest honour the organisation can award.
James Murphy, Kilkenny IFA Chairman said there was no man who deserved the award more.
“Larry assisted many farmers in Kilkenny with financial issues during the 1980s and 1990s, during a time when interest rates were around 20%.
“He dealt with these issues with the utmost discretion and sensitivity.
“A large amount of his work went unnoticed and discreetly behind the scenes,” Mr Murphy added.
On receiving his award Larry paid tribute to many people, including the late Bill Costello of Teagasc, with whom he traveled the country visiting banks on behalf of farmers. He paid a warm thanks to his wife Anne who was a huge support to him through the years.