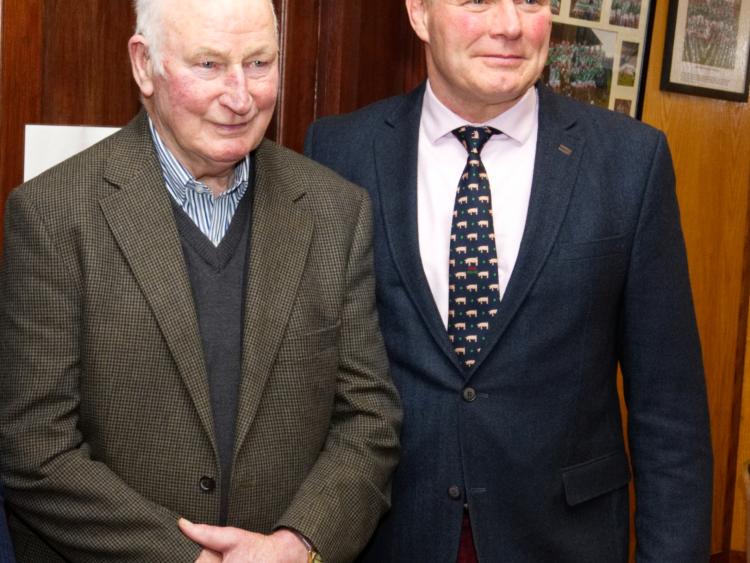 Affectionately known throughout the show world as ‘Mr Iverk’ Joe Malone has stepped aside as President of
the Iverk Show after many years.
At the recent Annual General Meeting in Mooncoin another great long serving member, Mr Jack Kearns
was elected President.
Joe has been involved with the Iverk Show since it recommenced in 1951 after being suspended during the
second world war. During the tributes to Joe someone quipped that he must have been born at the show.
Joe has been and will continue to be, involved in the cattle section. Joe also served as chairman of the Show.
He was actively involved in the purchase of the field by the committee in the 1970s that is now known as
the showgrounds.
Joe was a wizard at getting sponsorship for the classes and championships. He was instrumental in setting up
the current major Aldi, ABP and Irish Angus bull calf championship. Over the years he organised the title
sponsor for the All Ireland Broodmare and Foal final.
Along with his wife Elizabeth they initiated the annual reception for sponsors to thank them for their support
of the show. Together they loved to encourage new classes especially for young people. Wattie Walsh
summed up Joe in four words, ‘the most committed showman’.
In his address, chairman Robert Dowley thanked everyone involved in the show. “Without the combined
help of everyone, we would not have a show” he said. He gave special mention to the landowners who
willingly give their land; the big and small sponsors are vital; the Gardai, the press and local radio; Kilkenny
County Council, Tourism, Heritage and Leader; Doctors, Vets and ambulance service; the musicians who
provide the all-day entertainment; and last but certainly not least the members of the show committee.
Robert said a very important part of the show is the contribution and support we give to local organisation
and groups within the Barony of Iverk.
As well as a new president the Show will have a new treasurer. John Connolly is taking over from Olive
Kenneally who will return to working in the horse section. Lisa Walsh will take over John’s duties as
secretary of the cattle committee.
Addressing the large crowd auditor Ann Marie Power reported a very healthy balanced set of financial
figures.
And do you know what? We intend to do it all again on the 22 nd August this year. Put it in your diary and we
look forward to meeting you all again. Thank you, our visitors, so much for your support.