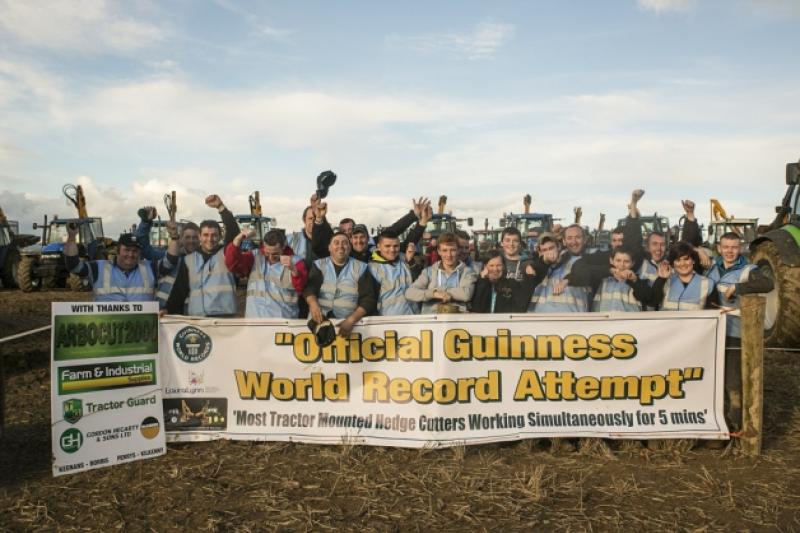 History was made; a new Guinness World record set and thousands of euros raised for a great charity at a special event in Kilkenny on Sunday.

History was made; a new Guinness World record set and thousands of euros raised for a great charity at a special event in Kilkenny on Sunday.

The official Guinness World Record attempt for the greatest number of tractor mounted hedge cutters. A total of 103 hedge cutters started the record and 102 successfully cut for five minutes to set the new world record.

There was a great turnout of hedge cutters from all corners of Ireland from Donegal to Cork. The 100th tractor to enter had travelled from Galway to great cheers from the registration tent as the numbers had officially reached the Guinness limit.

The tractors gathered in an assembly area and filed out in turn through the pints of Guinness where they were counted with Guinness World Record clickers by independent stewards. The tractors were escorted to the outside parameters of two fields and a safe distance left between them.

The successful attempt coincided with the second All Ireland Hedge Cutting Championships where 41 competitors took part in the championships judged by Catherine Keena, Teagasc and Michael Power, Coillte.

The new All Ireland Hedge Cutting Champion is Darren Fahey, Thurles. Darren was presented with a complete Saw Head Unit from Anthony Roche of Arbocut 2000. The reserve champion is John McDonald, Stradbally, Co. Laois who won a barrel of high grade oil from Farm and Industrial, Kilkenny. Joint 3rd place went to John Graves, Tipperary town and Paraic O’Brien, Cahir who both won a set of flails from Gordon Hegarty and Sons, Tullow, McConnel dealership, and a tractor guard from Tractor Guards UK.

The organiser thanked all who gave prizes; to Atkins Farm Machinery, Ferri dealership, Keenan’s Borris, Perrys’ of Kilkenny, Hickey Hire, Kilkenny and everyone who supported the day.

The organisers are very grateful to everyone who helped a great cause, the LauraLynn charity, Ireland’s only childrens’ hospice for terminally ill children. Winner of the raffle for everyone that took part in the record was John Wills, Carrick-On-Suir, who won oil from Perry’s, Kilkenny. Second was Shane O’Grady from Rathronan and third was John Smyth, Kilkenny. Both received clothing from Keenan’s of Borris.