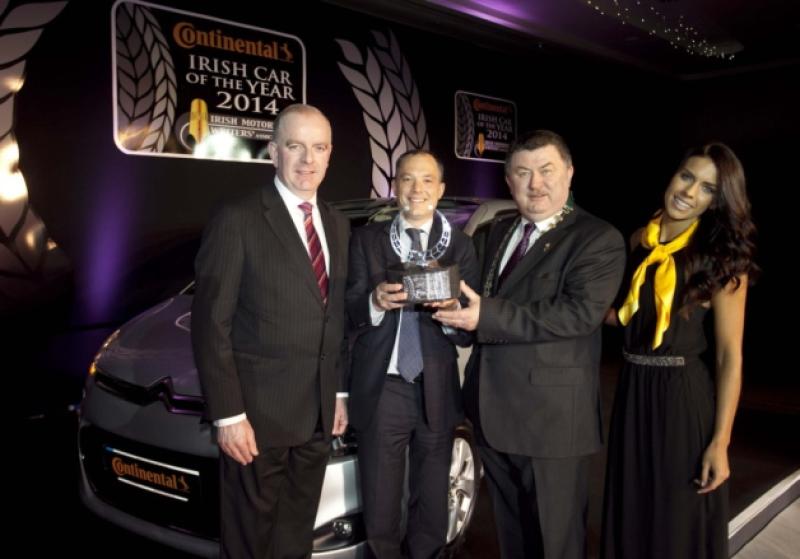 It was celebration time for Citroen and Mercedes Benz when they captured the top gongs at the Continental Irish Car of the Year awards.

It was celebration time for Citroen and Mercedes Benz when they captured the top gongs at the Continental Irish Car of the Year awards.

The new Citroen C4 Picasso won the car of the year title while the Mercedes Benz Sprinter carried off the van of the year crown in the event organised by the Irish Motoring Writers Association (IMWA).

The latest generation C4 Picasso also scooped the Irish Compact Family Car of the Year award. The Irish wins came only weeks after the C4 Picasso won the 2013 Golden Steering in the MPV category in a competition run by a number of leading European motoring magazines.

The new C4 Picasso excels with a bold and striking design; five-star EuroNCAP safety rating; highly efficient engines with sub-100g/km CO2 and high levels of equipment with a 7” touch screen specified as standard.

The Car of the Year award was voted for by the 28 members of the IMWA, including ’People motoring correspondent John Knox, who awarded votes on the basis of key criteria including safety, equipment level, fuel economy, comfort, practicality, ride and road-holding.

Frédéric Soulier, managing director, Citroën Motors Ireland said the award provided the Citroen network with a great boost heading into 2014. The new C4 Picasso was a very exciting car and the company were very proud it received the highest accolade.

Stephen Byrne, chief executive Mercedes Ireland was presented with the van award by Tom Dennigan of Continental Tyres Ireland, sponsors of the event.

Meanwhile, December 2 is the launch date of the new Skoda Yeti with prices from €24,490. A notable change is the addition of a new rugged version, the Outdoor, which has a full length panoramic retractable sunroof as standard and new exterior aluminium design features.