No clash with Michael Somers’ ash plant in Mullinahone 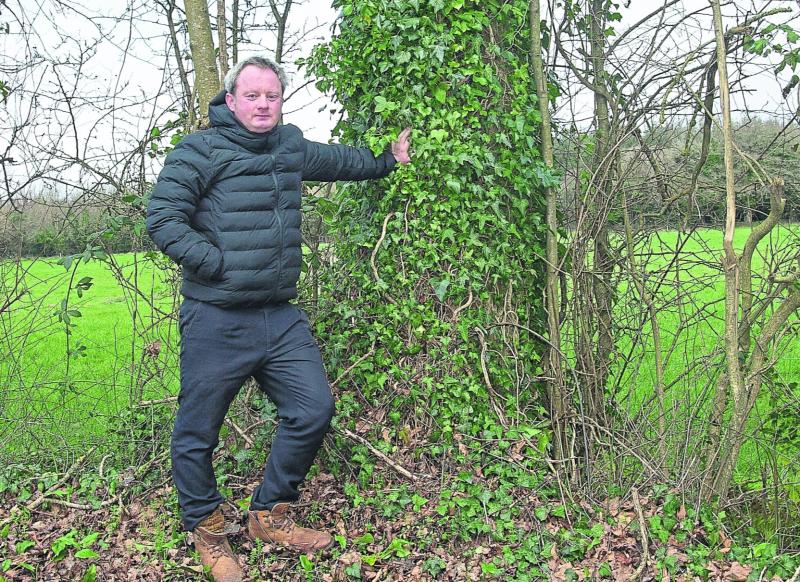 A Kilkenny man is playing his part in rejuvenating a historical Tipperary landmark.

The Kickham Tree, over the Kilkenny border outside Mullinahone, under which distinguished author, Charles J Kickham sat, was removed in 1992 for safety reasons and is now set to make a spectacular comeback.

Coon native and Teagasc expert, Michael Somers has been working with the local community to bring plans to fruition.

A carbon copy of the original Kickham Tree is to be created and planted at Gurteen on the approach road to Mullinahone from Fethard.

Locals have just embarked on an ambitious plan to promote the scenic spot outside the village at Gurteen, where the stately row of trees is steeped in Kickham folklore.

The heritage project is designed to have a significant environmental, cultural and tourism impact on the village of Mullinahone by highlighting the Kickham folklore intrinsic to the village.

By the end of March tree expert, Michael Somers will go through the delicate process of creating a new Kickham Tree which will have the same genetic make up as the original.

An attempt can be made to create a new Kickham tree because of the presence of an ash tree at Gurteen which survived the ash dieback disease that hit Ireland in the early 1990s when up to 70% of the ash trees that died in Ireland were within a 10 mile radius of Mullinahone.

The sturdy survivor was planted opposite the original Kickham Tree and both were in rows of trees planted by the Bryan family at Gurteen 200 years ago.

Michael Somers believes that the tree he will use to create a new Kickham tree is an ideal specimen for the process.

“This ash tree we are going to use is up to two hundred years old. The tree has no blemish, no discolouration, and there must be a reason it survived the ash dieback and we hope it is the perfect tree from which to attempt this process of creating a new Kickham tree,” said Michael Somers.

Before the end of March Michael will cut a shoot off the surviving ash tree at Gurteen and graft it to a new root stock and that will be allowed mature in a laboratory.

He will also take a tissue sample out of the tree bud and grow that in agar in the lab.

In three years time they hope to have a new Kickham Tree and more ash trees with the same genetic make up.

While they are waiting for that process to take its course, locals John Bermingham, Jim White and Denis Morrissey will proceed with other elements of the plan to enhance Gurteen.

The hedgerows on both sides of the road at Gurteen are being cut back and laid by hedgerows expert Eoin Donnelly.

That work is underway and already there is a noticeable change in the appearance of the area with a new view of Slievenamon emerging, more light has been created and the habitat for birds, mice and shrews will be improved as the hedge is rejuvenated.

The third element of the plan is the landscaping of both sides of the road that will allow drivers to pull in or pedestrians to walk and read about Kickham in a safe environment.

The existing pier structures at Gurteen will be taken away and more space will be created.

A commemorative symbol will be erected to mark the legacy of the Bryan family.

“The area will be a fitting and lasting tribute to Charles Kickham. The story of both the Bryans and Kickham will form part of an event which will take place during heritage week on the banks of the Anner at Crocanoir,” John Bermingham said.

It is a project that John Bermingham , Jim White and Dennis Morrissey are behind and they have been supported by Donal Mullane of Teagasc and by heritage officer Rosin O’Grady of Tipperary County Council.

The three neighbours came together to honour the memory of a local family, the Bryans.

“They lived at Gurteen for many centuries through several generations. The family line came to an end with the death of the brothers Basil and Austin. The Bryans left a legacy to the local community through the seeds they planted several hundred years ago and we are honoured as a group to remember what they did for this community,” Jim White said.

The three phases are sponsored by Tipperary County Council, Teagasc and FBD Trust.

Michael Somers loves these kind of heritage projects and he believes this one will be of enormous benefit for the environment and Mullinahone.

“Some great fish have come from small ponds. Every village has its own identity and something very special to offer and Kickham is unique to Mullinahone,” he said.

“This is a very simple project that will achieve a lot for this community,” he said.

Donal Mullane, Teagasc, said it was fantastic news and that the whole project was a very positive one. John Bermingham warned said the project would take time.

“We will end up with a much nicer place, it will act as a focal point where people will engage about the history of Kickham, about Slievenamon and the Bryan family.

“We need to promote the area and the unique history associated with it,” John insisted.