Faltering start, but Byrne is upbeat 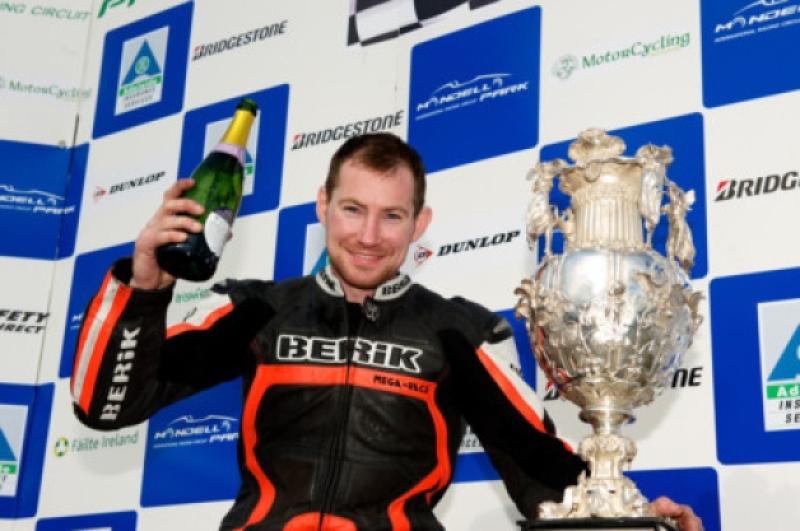 KILKENNY super bike racing ace, Damien Byrne (pictured below) from Clogh, Castlecomer has opened in what he hopes will be a busy racing season after enjoying a number of big wins last year.

KILKENNY super bike racing ace, Damien Byrne (pictured below) from Clogh, Castlecomer has opened in what he hopes will be a busy racing season after enjoying a number of big wins last year.

He enjoyed a double weekend of racing over Easter. On the Saturday he was in action in Bisopscourt at the second race meeting of the Irish championship.

Damien started well by qualifying in third place, but Race 1 did not go to plan and he finished in 9th position. Race 2, however, turned out to be even worse. On the warm up lap the bike started to act up, resulting in Byrne having to pull in on the first lap.

Saturday evening was spent fixing the bike, or so he and his crew thought.

On Easter Monday in the third race meeting at Kirkistown, Damien went out for practice session and it was clear that the problem with the bike was not sorted. The engine had to be taken apart to see what the problem was and by the time his qualifying came around his bike was still not ready, having been taken completely apart.

At the last minute his friend Ray Casey loan Byrne his 600cc bike which he used to qualify. He had a poor qualifying and was in 10th position on the grid.

Eventually Byrne’s crew managed to diagnose the problem with the bike (a faulty camshaft sensor). He was ready for action in Race 1.

Byrne finished seventh after having to try and work his way through other riders after having been blocked off at the start as he was on the third row of the grid. His lap times showed he was fourth quickest of the race.

In Race 2 Damien managed sixth place and was riding well, which was some consolation after a trying weekend.

Next stop will be Mondello Park this weekend for the first round of the Masters Championship. Damien is hoping that things will run smoothly this time, as it is a championship he really wants to excel in.