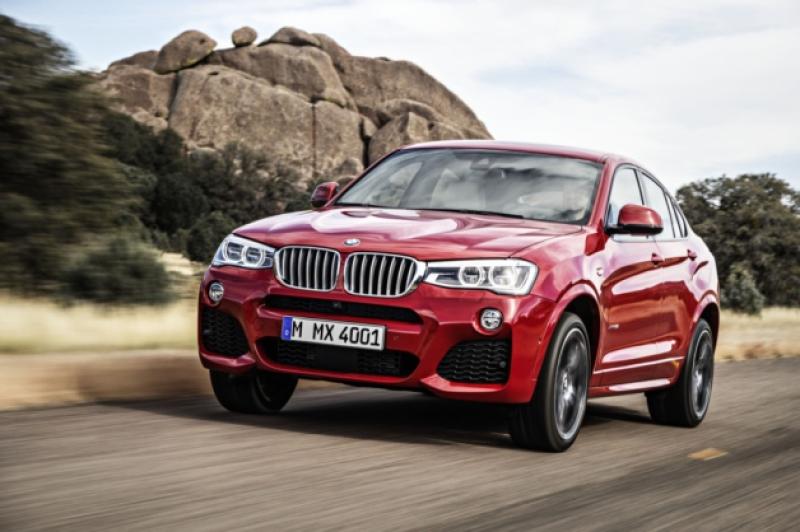 The BMW X4, the first mid-sized Sports Activity Coupé from the company, will arrive in Ireland in early July.

The BMW X4, the first mid-sized Sports Activity Coupé from the company, will arrive in Ireland in early July.

It will have a wide range of cutting-edge high-performance engines, the xDrive all-wheel-drive system and a high level of standard equipment. There will be a comprehensive package of BMW EfficientDynamics measures and the extensive connectivity provided by BMW ConnectedDrive.

From launch the X4 will be available with three diesel engines, all of which meet the EU6 standards. BMW TwinPower Turbo technology ensures that performance is maintained while fuel consumption and CO2 emissions are kept to a minimum.

The BMW X4 xDrive20d is powered by a newly developed all-aluminium 2.0-litre diesel engine. This unit develops 190hp at 4,000rpm with a peak torque of 400Nm. It takes just eight seconds to sprint from zero to 100km/h. Standard is a 6-speed manual gearbox but an 8-speed automatic is offered as an option.

BMWquote fuel consumption at 54.3mpg and give the CO2 emission figure at 138g/km.

Based on the same platform as the X3, the BMW X4 displays a sporting character of its own. The large air intakes positioned on the outer edges of the front end and the character lines in the front apron lend the X4 a more muscular and agile appearance.

The coupé-like roofline reaches its highest point over the front seats, reflecting the traditional driver focus of BMW cars, before dropping gently down towards the trailing edge of the boot lid.

The interior of the X4 is all sportiness and exclusivity. The driver and front passenger sit 20mm lower and the rear passengers 28mm lower than in a BMW X3, accentuating the classic coupé feeling. The rear bench seat comes with the type of continuously moulded side support normally only provided by two individual seats, but still offers space for three passengers. The load capacity is between 500 and 1,400 litres. Standard fit is an automatically opening tailgate, 18” light alloy wheels, park distance control and BMW Business Media package. Prices are from €57,720 for the X4 xDrive20d SE.