Now its a 2 Series Convertible 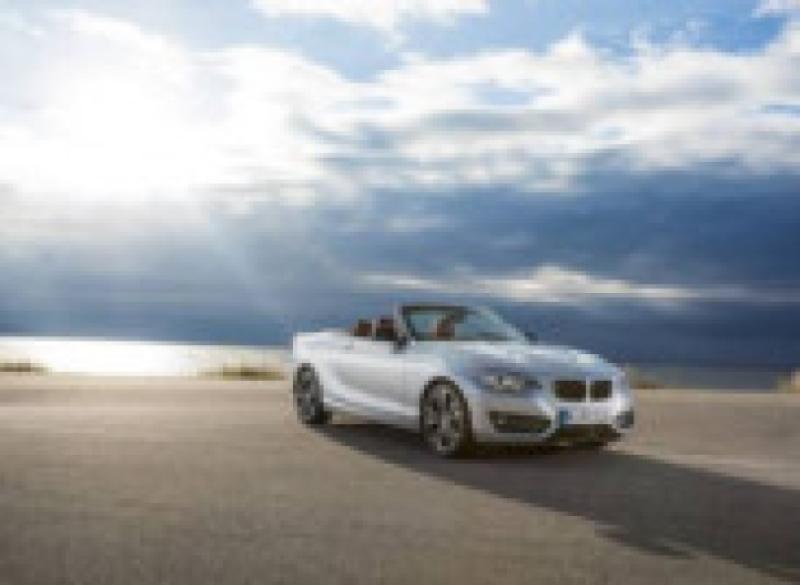 The third model in the BMW 2 Series portfolio, the 2 Series Convertible is on the way. It will joins the 2 Series Coupé and Active Tourer in the line-up next February.

The third model in the BMW 2 Series portfolio, the 2 Series Convertible is on the way. It will joins the 2 Series Coupé and Active Tourer in the line-up next February.

Prices will start at €44,630. The new car replaces the 1 Series Convertible, which was the most successful car in its class, and the only one with rear-wheel drive.

The 2 Series Convertible will be available with a choice of four engines, including

Fuel economy improvements over the previous model average 18%. The 2 Series Convertible also brings significant improvements in passenger space and access, acoustic comfort, style, dynamism and equipment, while the ConnectedDrive services for the first time include wireless updating of navigation data.

This Convertible is longer (by 72mm) and wider (by 26mm) than the model it replaces, and has a wheelbase which has been elongated by 30mm.

The electrically operated folding soft top lowers or raises at the touch of a button in just 20 seconds, and can be operated at speeds of just over 48km/h.

Additional insulation in the skin of the soft-top improves acoustic comfort.

Once folded, the soft top disappears fully into the boot to give a premium ‘boat deck’ appearance. Luggage capacity increases to 335 litres; the largest boot in its class.

The track widths are larger by 41mm at the front and 43mm at the rear than those of its predecessor. The widest part of the car is the rear wheel arch area.

The interior has been kept as simple as possible, with layered surfaces, driver-focused controls, clear instruments and a Sport or M Sport leather-covered multifunction steering wheel.

Controls for the audio and climate control systems are set against high-gloss black surfaces and the air vents have chrome surrounds. Switchable ambient lighting is further confirmation of the car’s premium quality.

The BMW iDrive controller, linked to a 6.5-inch display screen, gives access to the car’s control systems with minimum distraction.

Four BMW TwinPower Turbo engines featuring a suite of EfficientDynamics technologies endow the 2 Series Convertible with superior performance to its predecessor, with an average 18% improvement in fuel efficiency and lower CO2 emissions.

The engines include a new 2.0-litre diesel for the 220d and, for the first time

in a BMW convertible, an M Performance power unit for the M235i. There are also two

All are more powerful than the engines in the previous model and meet EU6 emissions standards.