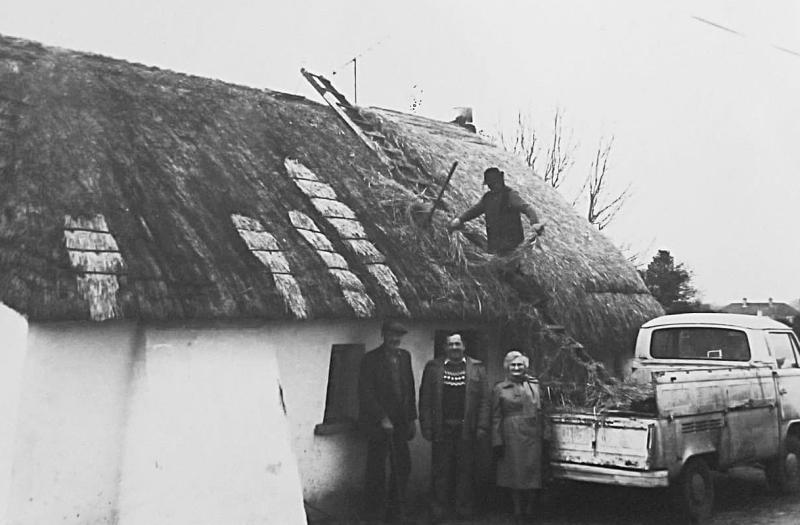 A special part of Kilkenny heritage needs our help.
Phil Barron’s cottage in Clogh is a cherished community landmark and family homestead - but it is in dire need of renovations to ensure its survival.

Generations of the same family have lived in the coal miner’s cottage, and although many have moved away, they still love the little house where even the youngest generations have spent time. However, the years, and Irish weather, have taken their toll and now the family are asking for support to return their ‘beautiful burden’ to its former glory.

A fundraising campaign has recently been launched to raise the €25,000 it is estimated will be needed to cover the cost of the rethatch, replacing roof woods, and other renovation steps.
Known in the family as ‘Phe’s Cottage’, because the current owner couldn’t pronounce her uncle’s name as a toddler, at many times more than one generation of the first owner’s descendants lived there together.

Originally the little home was a one-room building, with an internal wall added at an early stage to divide the living space from the bedroom.
Even today the cottage has remained in that original layout, with no indoor toilet, and a fireside settle bed built from a tree in the garden in the early 1900s.

The striking thatch is what marks out the cottage to the passer-by. In recent years it has been covered in plastic to give the building some protection from the weather, but, as our picture below shows, when it's in it’s freshly-thatched glory the cottage is a beautiful building.

The last major renovation and re-thatch of the cottage was undertaken by the current owner, Helen Kealy-Dunne and her husband Ambrose, in 2004. For 20 years they would visit at least once a week to light a fire in the hearth. On other occassions the young cousins would gather there for sleep-overs.
Unfortunately, in recent years ill health and the cost of repairs have led to the cottage falling into disrepair. The building needs to be regularly maintained. Helen and Ambrose used original materials in repairs.
The cottage is a protected structure and is on the National Inventory of Archaeological Heritage. However it’s upkeep remains the responsibility of the owner. 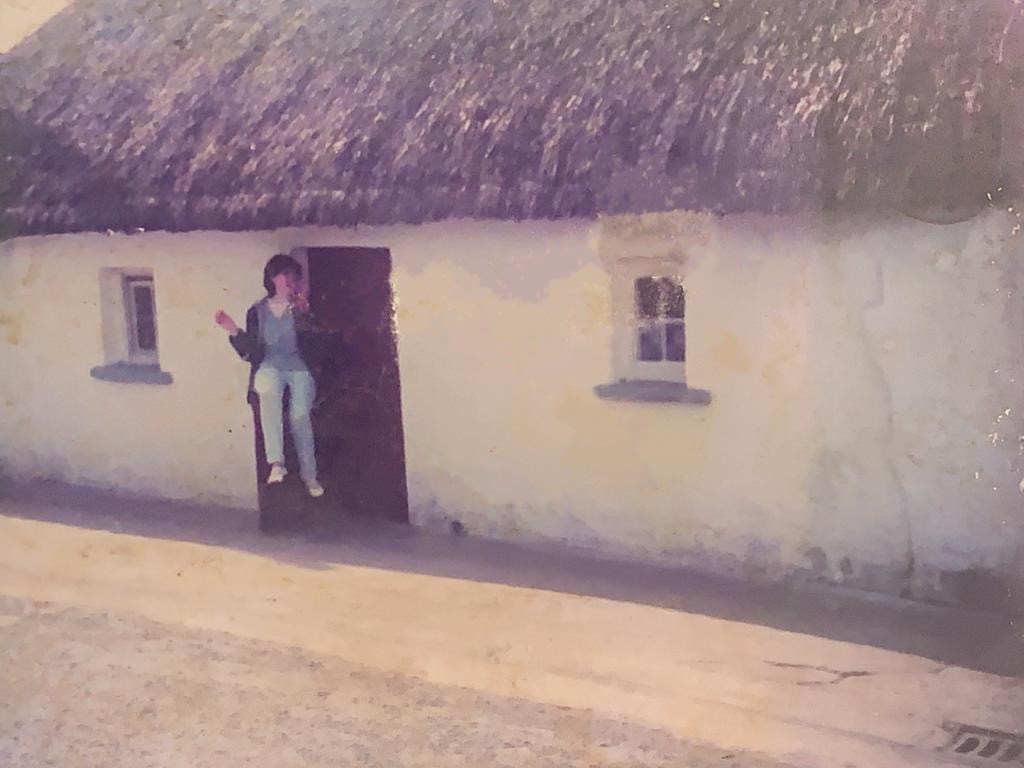 The little house means a lot to the whole extended family. “We really, really care about the cottage,” said Sophie Dunne, the spokesperson for the house and the great-great-great granddaughter of one of the women who came from the house. The family are able to trace their ancestry line back seven generations.
The house has been in the family for more than 160 years. The family know their history and know everyone who lived in the cottage over that time.

“The bad weather in Ireland has done us no favours at all,” Sophie explained how the cottage has fallen into disrepair, but, she stressed, “The house is absolutely loved.”
“It’s heartbreaking because we all have fond memories of the house, but we also understand the burden.”

The house has been unoccupied since 1990, when Phil Barron went to live with his niece. However, in 2010 Sophie, her mother Helen and her sisters, lived in the cottage for a month, to see what life was like in former years. “It was great, but it was a challenge not to have modern amenities,” Sophie said.
“We love that house. It’s more than a house to us, it really is a time machine into the past and our family history.”

A recent boost for the family was being successful in winning a grant through the Clogh Tidy Towns and Heritage Group. This will really help the fundraising and renovations. However they still need a lot of help.
Sophie said: “We understand times are tough and we really appreciate any donation.”
To donate to the renovation fund click here go to www.gofundme.com/
The family are very grateful to the friends and strangers who have loved the story of the house and been so generous.

Looking forward, Sophie says the family would like to see the cottage become a heritage centre and open it up to visitors from Clogh, Ireland and all over the world enjoying it.
But that is a plan for another day, after the cottage has been saved. 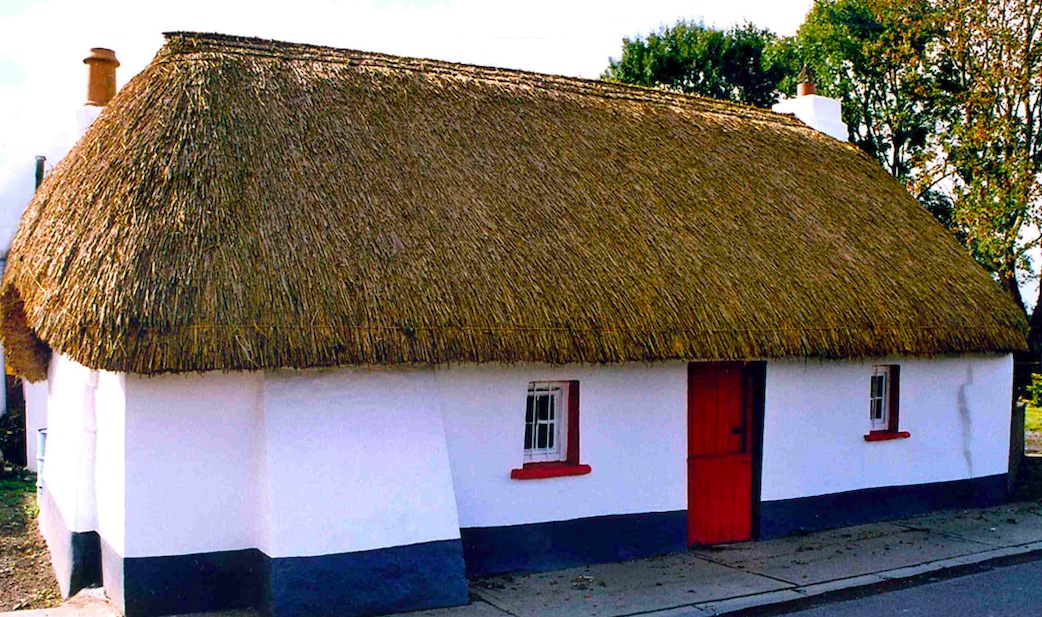 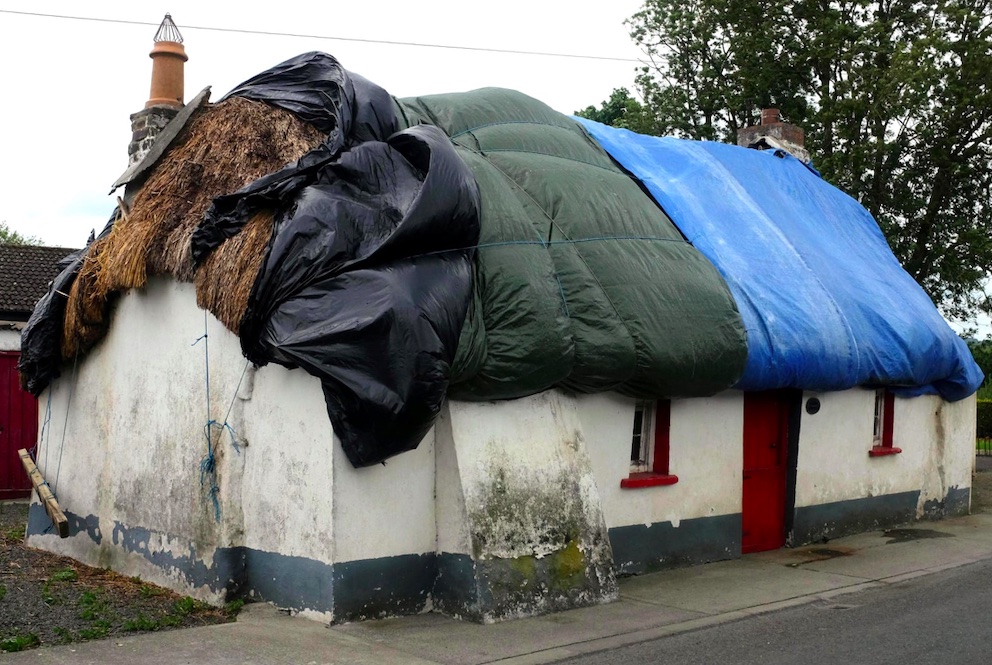 Family History
It’s hard to pin-point exactly when the little cottage was built, but it appears on ordnance survey maps from 1839. And the family who own the house today can trace their link with the home back to that era.
In the mid-1800s John Delaney and his wife were living in the cottage. They would be blessed with eight daughters. One of those daughters was Ann. Ann married Tom Barron and they raised a family of five in the cottage — including son Philip, who lived there for 78 years, until the 1990s.
Another of their children was Margaret. She married John Kealy and one of their five children, Helen (now Kealy-Dunne) inherited the cottage from them.

Between Margaret and John’s five children there are now 12 grandchildren and eight great-grandchildren, almost all of whom knew Phil Barron.
For generations the Kilkenny People newspaper was “the most important paper that ever crossed the little, red door,” Sophie said.

Coal Mining History
Phe’s cottage is not only a valued part of one family’s heritage, it also a significant part of Kilkenny history. As an original miner’s cottage it is a very real link to the coal mining industry that once played such an important role in the local economy.
What marks the cottage out from other thatched cottages as specifically a miner’s cottage is that it is thatched in straw. Other cottages are thatched in materials like reeds.
For almost 300 years there was coal mined in Castlecomer, until the last mine closed in 1969.