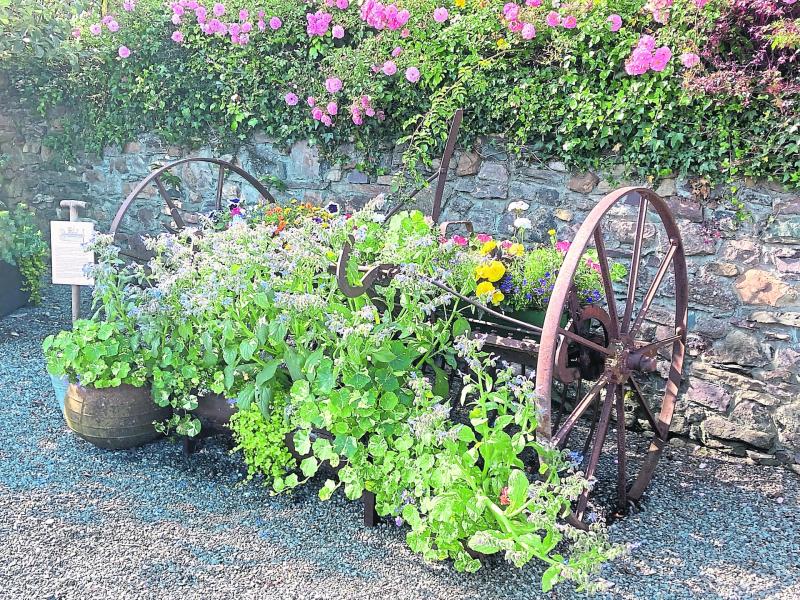 TIMES PAST: Tullahought Tidy Towns have brought the memories flooding back by using this hay rake for their latest floral display

A flashback to olden times and ‘a day in the meadow’ has become a reality with the appearance of a horsedrawn hay rake as the base for a floral display in Tullahought.

Organised by Breda Horgan and the Tidy Towns committee, its presence has evoked pleasant memories and a new experience for visitors from near and far.

The horsedrawn rake made of iron was one of two types of rakes that mechanised some of the farmers work in the hayfield.

Always associated with long scorching hot summer days, the gathering and turning of hay was a laborious task, when every sward had to be turned and returned with a pitch (two liar) fork to ensure its even drying.

Carried out over a couple of days, the operation saw a whole family or a team of men and women and children starting up and down the field with the heavier swards around the headlands that were in the shade of the ditches.

After the hay was deemed to be dry enough or nearly good enough if rain was imminent it was gathered into ranks for the making of small cocks that were later amalgamated into trams.

Here the rake was a huge labour-saving asset as it criss-crossed the field gathering the loose hay into parallel ranks.

With two types of horsedrawn rakes the more basic tumble rake consisting of up to 17 four-foot parallel spikes that slid on two curved runners along the top of the ground.

Curved at both ends and sharply pointed, the crucial angle of contact to the ground was constantly adjusted by the horseman by a wooden handle, that was then used the tip over the load and on he went for the next lot.

Pulled by a single horse it was universally seen as both a skilful and dangerous operation carried out by an experience horseman who followed the rake on foot.

Requiring constant observation, co-ordination and ongoing reaction to the uneven surface or in the event of the horse stopping suddenly it could see the man or animal spiked if the rake stuck in the ground or tumbled accidently.

The hay rake on display in Tullahought was the Rolls Royce version with two massive four foot diameter wheels.

It was designed to allow the operator to be seated on top of it, with a set of levers to set the angle of the two dozed curved teeth for collection and also to drop the load of gathered hay.

A crucial part of the rake operator’s work, when the cocks or trams were made, was to have a tidy field that was akin to the honour of a straight furrow for the ploughman.

In the days gone by the traditionally lighter meadows, that only benefitted from farmyard manure and bagstuff, the forerunner of 10.10.20, biodiversity abounded with an abundance of wildlife and wild flowers as the joyous singing from unseen skylarks could be heard from high above.

On terra firma it was essential that an eye was kept out to spot and remove the occasional dog-root, buachalán or thorny thistle.

Hard days in the meadow were akin to ‘a day in the bog’ in turf country where the welcome break for refreshments consisted of brown bread, sandwiches, tea in a bottle and maybe a Marietta biscuit.

Time was marked to the minute by the position of the sun and assisted by the calling of the midday and evening Angelus bells.

Equally important was keeping an eye on the horizon, locally Slievenamon for its colour, cloud formation, changing breeze direction that could forecast imminent weather changes.

In days before suncream reduced the farmer’s tan, a flat-peaked cap turned to suit the wearer was the normal apparel while a rare Si Gaoith and swarming bees were the only other possible distractions to the task in hand.


After the hay or hay cocks were made into trams and left for a while to settle the next task was bringing them into the farmyard.

Building trams was an art in itself, with many styles from the diameter of the base to the height with the sides trimmed to throw off the rain.

The finish was the crucial part with a well put together sop of hay designed to go on the top to prevent the rain going down through the tram cock.

Tied down to itself with two twines that required adjusting as the tram settled, stones were used in places to keep a constant strain on them.

Before the proliferation of tractors and the square bale, trams were taken home by a specialised hay cart that could be tilted, backed into the base of the tram which would be pulled onto it by a winch.

The more common way was to sleigh it home behind the horse, a task that raised plenty of dust off the dry ground and created soogans made from loose pieces of hay.

On arrival in the farmyard a reek of hay was built out in the open if a shed was unavailable.

Another art form that included great co-ordination by the pikers on the ground and the man or men on top building a solid secure and waterproof bench of winter fodder.

Associated with it were the longer handled piking fork and the hay knife that was used to cut a section of the reek for feeding when required.

With most of the rakes being built by Ransomes Sims and Jefferies in Ipswich and Pierces of Wexford, the surviving ones have provided an insight to other long hot summer days.