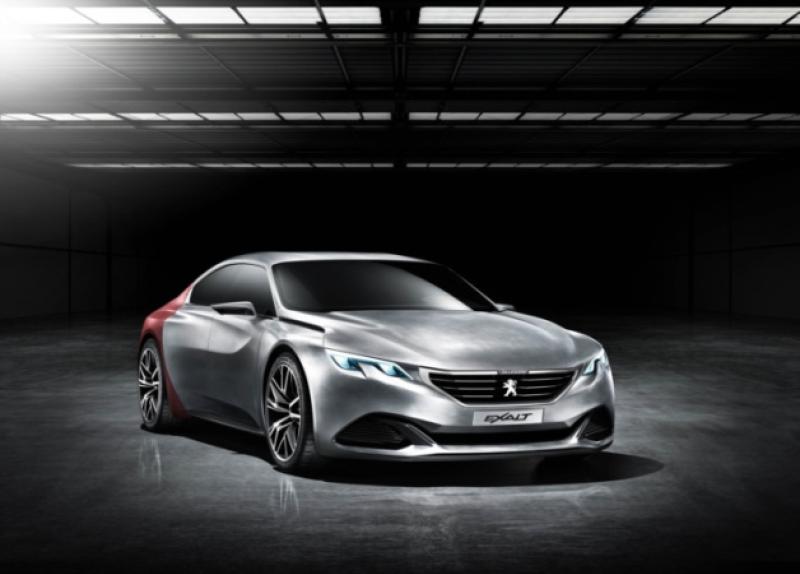 Peugeot used shark skin inspired material to produce what they described as their vision of the future at the Beijing Motor Show. It was the radical new Exalt concept car.

Peugeot used shark skin inspired material to produce what they described as their vision of the future at the Beijing Motor Show. It was the radical new Exalt concept car.

Chiseled panels, a long bonnet, raked windscreen, a low roof and short rear overhangs give the Peugeot Exalt a sleek and athletic design.

In homage to the art of the French motor car from the twenties and thirties, bare steel bodywork, seen also on the famous Peugeot Onyx concept, has been hand-formed by a master panel beater.

Powered by a HYbrid4 drive train with a total maximum power of 340bhp, efficiency is enhanced by the use of shark skin inspired material on the rear quarter, to ensure greater aerodynamic performance and thus reduced fuel consumption.

One of a kind, the Peugeot Exalt boasts a very slender profile that conceals a cabin that is both spacious and inviting, thanks to the combination of an array of natural materials: aged leather, natural wool-based mixed fabric, ebony wood.

The i-Cockpit interior, already seen on the Peugeot 208, 2008 and new 308, delivers a driving experience dedicated to enjoyment. A small steering wheel and the digital instrument panel are arranged in front of the driver for improved control.

Two folding touch screens emerge from the dashboard. The upper screen gives access to the on board computer, the Hi-Fi and navigation systems. The second screen presents a permanently visible control bar to provide access to the

Nine toggle control switches are located on the dashboard, arranged in two groups; two to the left of the small steering wheel, seven to the right.

This distribution was adopted because of the human brain’s ability to easily remember up to seven elements, for their position and their function.

A black light system, particularly useful during the transition between day and night, has been built into the headlamps. Visibility problems are reduced and driving becomes more relaxed, to ensure improved observation of road markings.

The Peugeot Exalt also offers an exceptionally versatile boot with a low loading sill and wooden trim. It works with an innovative pantograph mechanism to allow maximum opening, while needing less space externally.

Weighing just 1,700kg, the Peugeot Exalt is powered by a plug-in HYbrid4 drive train with a total maximum power of 340bhp shared between the four wheels. The bonnet houses the 1.6-litre THP 270bhp developed by Peugeot Sport.

At the rear, the multi-link rear axle contains a 50kW electric machine for electric or hybrid phases of operation. This machine also intervenes to recharge the battery through energy recovery braking.

The soon-to-be-introduced Volvo S60 and V60 Polestar, which will be sold on four continents around the world from next June, will be fitted with 245/35 R 20 Michelin Pilot Super Sport ultra-high performance tyres, according to a statement issued by the French tyre manufacturer.

The Polestar engineered cars are Volvo’s fastest production cars ever and, with their 350hp six-cylinder turbocharged engines, can accelerate from 0 to 100km/h in just 4.9 seconds.

The Pilot Super Sport is Michelin’s ultra-high performance road tyre. It is fitted to some of the world’s fastest supercars and was developed over many years of racing at events such as the Le Mans 24 hours race in which Michelin tyres have carried the winning cars over the finish line for the past 16 years in succession.