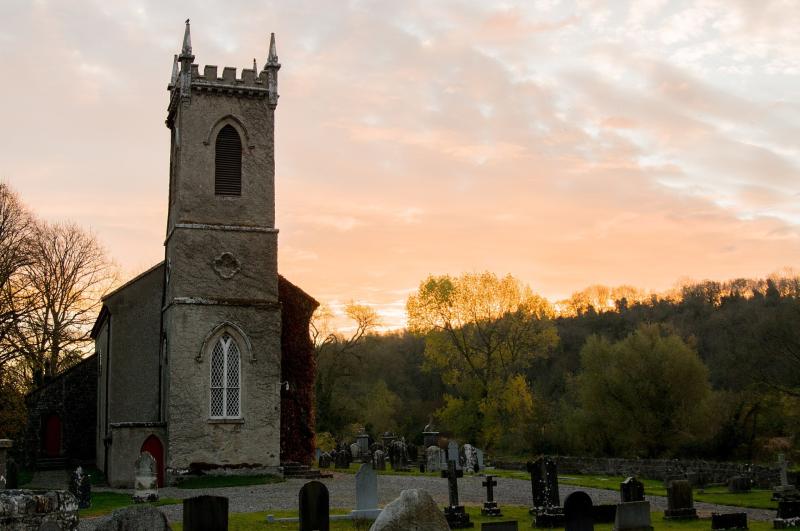 Saint Peter’s Church, Ennisnag (Inis Snaig - meaning ‘the Island or islet of the Crane or Heron’) lies beside the Kings River, one mile north of Stoneyford village.

It is located in the townland of Ennisnag, in the barony of Shillelogher.

This 19th Century church was constructed on an old medieval monastery.

Probably the most distinguished rector and resident of Ennisnag was the famous Irish antiquarian, James Graves, who died in 1886.

In the graveyard, the Catholic burials were conducted to the rear and the Church of Ireland burials to the front. Among those buried there is Hubert Butler, the Anglo-Irish essayist.

A protected structure, the Board of First Fruits Church of Ireland built the church in 1815 under the architect William Robertson.

St Mogue of Ferns, Wexford, was patron of the ancient church beside the King’s River, which was demolished in 1814.

The Rev James Graves, rector of Ennisnag, was secretary of the old Kilkenny Archaeological Society which was founded in 1846.

With his collaborator and fellow enthusiast John G Prim, their efforts in recording the history of ancient monuments and landmarks attracted the attention of leading scholars throughout Ireland.

The people of County Kilkenny in particular owe a debt of gratitude to these two pioneers.

A woollen mills known as the Marino factory was started here on the land of John G Prim in 1810 to give employ­ment to teenage youths of both sexes, but failed in business in 1822.

Years later the Pilsworth family of Thomastown leased the mill which worked successfully for flour-making until 1870, then as a grain store for the Thomastown mills and now one of our mill ruins.

It is recorded that there were 22 mills on the Nore and 10 on the King’s River in the late 18th Century.