Dicksboro edge past Mooncoin in Under 21 Hurling Semi-Final 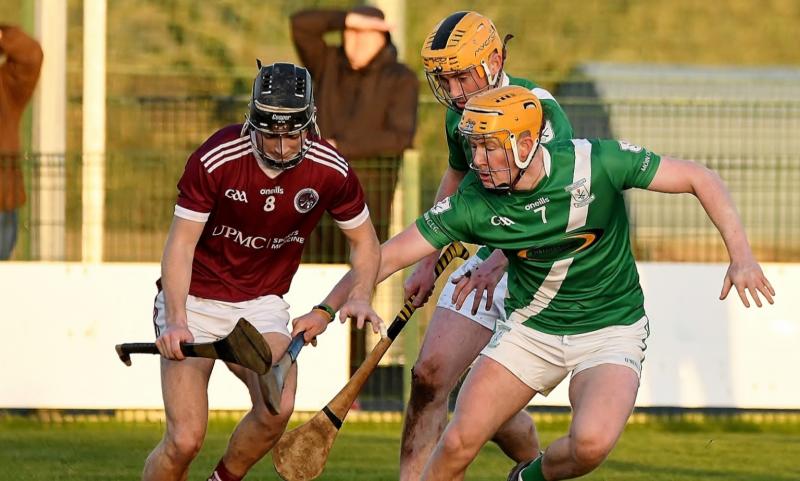 Sean O’Dwyer (Mooncoin) gets the ball away from Charlie Nolan (Dicksboro) during Sunday’s under-21 Roinn A hurling semi-final, which was played in Mooncoin. Pictures: Willie Dempsey

Dicksboro travelled to Mooncoin for the JJ Kavanagh & Sons U-21 Roinn A semi-final on Sunday the 16th January last.  Prior to throw-in, the teams and spectators stood for a minute’s silence in honour of Ashling Murphy RIP.

The sizeable contingent of supporters were treated to a fantastic game of hurling.  Despite the damp, cold weather and heavy conditions underfoot, it was a fast-paced encounter from start to finish.

Dicksboro’s James Carroll pounced at the throw-in and quickly offloaded to Aran Murphy who picked out Harry Shine and Harry pointed his first of six points of the afternoon in under 30 seconds.  Mooncoin’s first goal chance came in the third minute – a long-range free from captain Martin O’Neill was plucked out of the sky by the tall centre-forward, James Delahunty, but the Dicksboro defence didn’t waver and his attempt at a goal was deflected out for a 65.

Killian Hogan easily converted the 65 to put Mooncoin on the scoreboard.  Adam Croke pointed shortly after with a great ball from Sean O’Dwyer.

Dicksboro then went on the attack but some great defending from the Mooncoin half back line prevented Dicksboro from moving forward.  However, in the eight minute, Dicksboro’s Timmy Clifford made a run up the field and picked out Liam Moore who was unmarked and Liam made no mistake in putting the ball over the black spot.

Aran Murphy kept the Dicksboro scoreboard ticking over with a lovely point in the 10th minute.

The midfield battles were proving crucial and in the 11th minute, Charlie Nolan came away with the ball and a perfect lay-off to Harry Shine was rewarded with another point for the Boro men.  Martin O’Neill responded less than a minute later when he intercepted a Dicksboro lineball and his point from deep in his own half was superb.

On resumption following the water break, a free awarded to Dicksboro in their own half resulted in Liam Moore picking out Mark Nolan for the point.  In the 19th minute, Máirtín Gannon broke out of a ruck and sent over a lovely point from the sideline.

A misplaced pass from Mooncoin in the 23rd minute was seized upon by Mark Nolan and Nolan scored his second point of the afternoon.  The Dicksboro men were fast and a run up the line in the 31st minute gave them one more chance at a score before the half-time whistle and Cillian Hackett obliged with a lovely point.

Mooncoin came out in the second half determined to narrow the gap between the sides and when the Dicksboro forwards went on the attack, they were driven back and their first score of the second half came from a pass back to their wing back, Eoghan Moylan who opened the scoring in the 32nd minute.

Adam Croke replied with Mooncoin’s opening score of the second half in the 33rd minute.  Less than a minute later, Mooncoin went on the attack with a run from Máirtín Gannon.

Máirtín, anticipating a threat from the Dicksboro defence, handpassed to Ciaran Quilty and Quilty did likewise to Lee Tracey who was on the edge of the square.  Tracey'sstrike was saved by Brian Minogue but Sean Gannon was first to react and, striking on the ground, he buried the ball in the back of the net.

Killian Hogan struck the posts in the 35th minute but, again, Sean Gannon was in the right place at the right time and he pointed to level the sides – game on!

Not to be outdone, Dicksboro went on the attack and following a series of passes, they split the Mooncoin defence and found Aran Murphy whose strike on goal was unstoppable.  Harry Shine (x1) and Killian Hogan (x2) converted placed balls with accuracy and another wayward pass from Mooncoin was capitalised upon by Liam Brennan-Smyth which gave Dicksboro a three-point advantage at the second water break – Dicksboro 1-13 Mooncoin 1-10.

It was still anyone’s game and when the fourth quarter started, neither side looked like they were tiring.  Both sides maintained the pressure and were hunting in packs for every loose ball.

Mooncoin substitute Paraic Murphy put his name on the scoreboard in the 49th minute and a converted free from Killian Hogan saw the sides again only one point apart with six minutes to go.  The cheers from both sets of supporters grew louder as the sides traded scores in the dying minutes.

The ever-accurate Mark Nolan gave his side a two-point advantage in the 57th minute but Killian Hogan again reduced it to one when he pointed a placed ball in the 58th minute.

Liam Moore pointed just on the 60 minute mark and a point from Sean O’Dwyer in injury time gave Mooncoin a glimmer of hope that might send the game to extra time but time had run out and the final whistle put an end to their last attack.  Fulltime Mooncoin 1-14, Dicksboro 1-15.

Credit goes to both centre-backs, Timmy Clifford and Martin O’Neill.  They led their teams’ defences with confidence and determination and along with all four wingbacks, Eoghan Moylan, Stevie Dermody, Sean Brennan and Sean O’Dwyer, were outstanding.

A special mention also goes to Dicksboro’s Mark Nolan and Aran Murphy and Liam Moore who was instrumental in setting up a number of scores and the Mooncoin midfield pairing of Killian Hogan and Sean Gannon, who defended and attacked with vigour throughout the game.