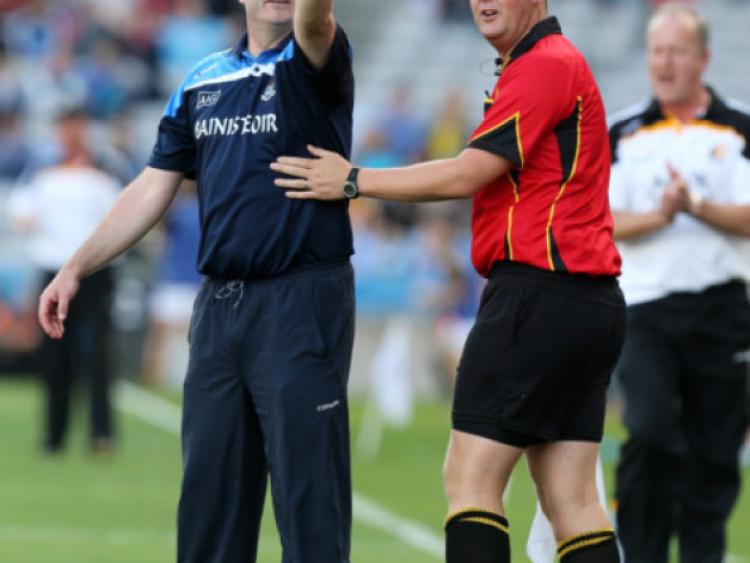 Dublin manager, Anthony Day was stunned by their 12 point loss to Kilkenny on Sunday, and his post match reaction was one of shock and disbelief.

Dublin manager, Anthony Day was stunned by their 12 point loss to Kilkenny on Sunday, and his post match reaction was one of shock and disbelief.

As he sat down to face a room full of questioning journalists, he jokingly made reference to what went through James Connolly’s head as he faced the English rifles.

His eyes were turned towards the floor as he spoke, no doubt still trying to process what had happened in the match that had ended just 15 minutes earlier.

Dublin had sacrificed a member of their full forward line to play an extra man around the middle of the park. The move misfired on the Dubs, however, and they managed just 10 scores during the 70 minutes of hurling.

“No, 1-9, that was never going to be the winning score,” Daly said with obvious pain in his voice.” If you had told me beforehand that they wouldn’t score a goal, and we would, I would of taken it.

“How we got only three points in the second half I don’t know. But we gave a great defensive display. All six backs hurled well, especially Stephen (Hiney). He’s really been through a lot and he had a great game.

Dublin’s power failure was something which Daly couldn’t understand. It was clear to see that the cogs were turning in his head as he analysed his team’s capitulation.

“Our touch, I just couldn’t figure it out,” he said as he opened his heart to the room. “Our touch has been very good in training, right up until the ref threw in the ball. We played two games in training and we looked ready. Kilkenny turned up on the day though. They deserved it.”

Dublin’s last three games against the Cats resulted in two wins and one draw for Daly’s men, and you might be forgiven for thinking that their submissive displays against Kilkenny were forgotten. The Dublin attack simply failed to ignite.

Talk following the game was that the Dublin dressing room had been buzzing with tension before throw in. Daly admitted that it was something which had caught him by surprise.

“I’ve often been in tension filled rooms and fellas have gone out and hurled great,” he said. “Then you can be in a room with no tension and it just doesn’t click into gear at all.”

When it was suggested Dublin over played the ball in the middle third, Daly listened but didn’t give much ground.

“We got our hands on the ball, we got a lot of touches, but when you show the ball to those lads (Kilkenny) you know what happens. Kilkenny tackled like tigers out there.

“We didn’t match that intensity at all. We’ve got a quarter-final clash coming up and we have to prepare for that. Whatever about results, we have to perform the next day.”

Like Connolly, the Clare man was fighting against all the odds. Crucially, Daly and his men have a second chance.