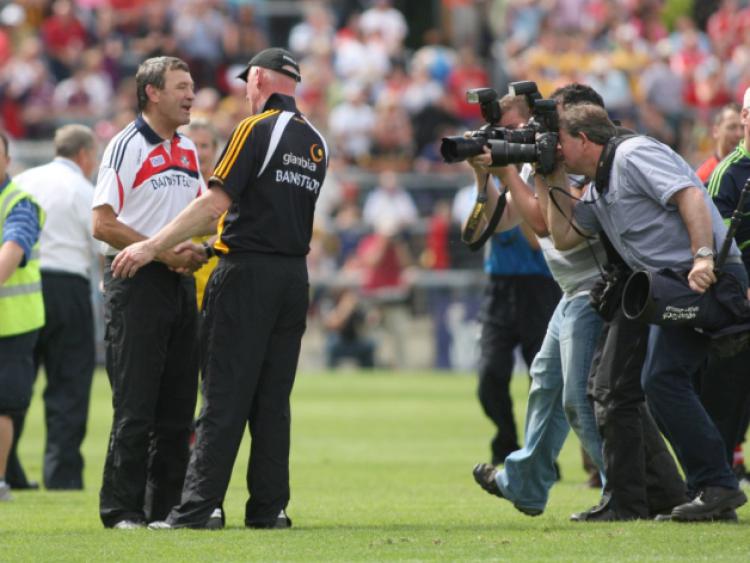 BEING in the losing dressing-room is never easy, especially when you’re the team whose reign as All-Ireland champions has been cut short.

BEING in the losing dressing-room is never easy, especially when you’re the team whose reign as All-Ireland champions has been cut short.

However, Sunday’s defeat at the hands of Cork was even harder to take for Brian Cody given the number of talking points attached to the 0-19 to 0-14 loss.

It was no surprise that the Kilkenny manager bore a weary expression when quizzed about Sunday’s quarter-final loss in Semple Stadium. Referees, cards, fouls and the future of both him and his players formed the core of a brief inquisition from the press corps.

Even in the depths of defeat, Cody was quick to praise the players for their never-say-die spirit.

“The lads were magnificent in the way they kept going,” he said. “The spirit was superb and the intensity and determination to fight their way back into the game even when things were going against us with a few minutes to go.

“The heads never dropped, but that’s what made them the team they are. They fought hard for the result, but they were on the wrong end of it this time.”

That was the easy part out of the way. Next up was the question about the future of team. Even though the year started in promising fashion, with a National Hurling League title safely secured - Kilkenny’s fifth under Cody - crashing out of Leinster and losing the Liam MacCarthy Cup saw some people question whether the team had another year in the tank.

“There are several more seasons in the team,” came the firm response from the James Stephens man. “The team constantly evolves and changes from year to year. There are so many players in that dressing-room who have many good years ahead of them.

“There has been a few ends of eras predicted over the last number of years - I don’t think any era ends to be honest with you. If end of an era means that it is the end of a Kilkenny senior hurling team being competitive at intercounty level I’d say that is something that shouldn’t be allowed happen.

“There is mileage on some of them and there is not much mileage on others,” he said of the players. “But, every team changes; individuals come and go and the team goes on and the game goes on. That’s the way it has been happening for a long, long time and that’s the way it will continue.”

And as for his own role as manager? The question was slightly tongue in cheek, and was answered accordingly.

“I won’t say anything about myself,” he smiled. “That’s for sure!”

That speculation on both his and the team’s future was merely the curtain-raiser to the main event - Henry Shefflin’s red card. At several stages in Sunday’s game Cody was an animated figure on the sideline, the manager clearly frustrated at some of the decisions given by referee Barry Kelly.

Two of those involved bookings for Shefflin, leaving Kilkenny to play the entire second half with 14 men. Even in the aftermath of the game, the decisions still baffled the Kilkenny boss.

“I don’t know - I couldn’t believe it,” he said when asked for his view on the two bookings. “I don’t understand it.”

That exasperation became all the greater when it was mentioned how Cork’s Shane O’Neill had escaped a red card for his indiscriminate pull on Eoin Larkin in the build-up to Kilkenny’s second half penalty.

“I have no idea why Henry Shefflin got two yellow cards, no idea,” he said, going back to the Shefflin dismissal.

“For the second yellow it was clear to me that there was a Cork player (Jamie Coughlin) falling down and that Henry’s hurl was very, very low. When a player falls the hurl ends up around his neck. Henry didn’t put his hurl up there - the player put his body down into it.

“I’m not going to stand here complaining and whingeing about referees - I could have done that for years but I haven’t,” he said. “All I can say is congratulations to Cork on a great win. Our lads gave it everything; their spirit was fantastic out there. We kept going to the very end.

“Things didn’t particularly go our way in lots of facets of the game but then again we’ve had success for a long, long time. We haven’t been making excuses down the line up to now and we’re not going to make excuses now. The team that scores the most wins and sadly today it wasn’t us.”