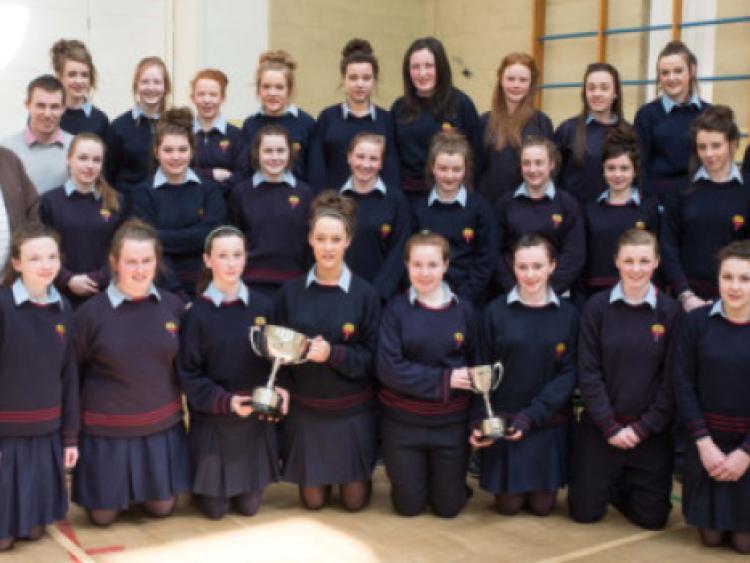 For the camogie stars in Castlecomer Community School it has been a season full of highs and lows.

For the camogie stars in Castlecomer Community School it has been a season full of highs and lows.

The first silverware of the year was claimed in October when the junior team claimed the Leinster 7-a-side Roinn B title after scoring a great win over Borris.

The team then travelled to Dublin to contest the All-Ireland series. ’Comer scored two very convincing wins and reached the final against Laurel Hill, Limerick. In a hugely entertaining final the Cats came up just short by a point. It was heartache after a late Katie Nolan free hit the crossbar.

This defeat was to prove a powerful motivation for the season ahead.

The Castlecomer CS senior team, with a number of juniors aboard, reached the Leinster ‘B’ final against a highly fancied St Mary’s, New Ross. ’Comer fought hard and gave their all but came up short by three points. This was a powerful performance as St Mary’s went on to win the All-Ireland.

The future is bright for this panel as only three sixth years will be missing for the 2014 campaign, team captain Maggie Nolan, centre-forward Laura Finn and Rebecca Comerford. The trio have been a driving force for camogie in the school and all there wish them the best in the future.

Castlecomer won the junior ‘B’ All-Ireland final on Friday recently in Birr. This will be a day that will live long in the memories of a dedicated and committed young bunch of woman. Hopefully this will be the start of a successful run for the school.

The journey to All-Ireland glory began in in Enniscorthy. CCS toughest contest in Leinster was the semi-final win over a highly rated Colaiste Bhride. Played in horrible conditions, ’Comer battled hard and won by two points mainly thanks to a well taken goal by Sarah Molloy.

This victory set up a clash with against Loreto Wexford in well turned out Bunclody GAA grounds. ’Comer put in a good performance and were convincing 3-8 to 1-1 winners.

This win set up a date with St Patrick’s, Keady in Armagh. Like all Northern teams, Keady were well organised. ’Comer took a while to settle and were fortunate to lead at half time by 0-4 to 0-2, thanks mainly to two excellent points from play by young forward Danielle Morrissey and a pair from placed ball by the impressive Katie Nolan.

The Noresiders settled and hurled far better in the second half. The crucial score was a well taken goal by Aoilean Hennessy. ’Comer tacked over a few well taken scores before sub, Aine Murphy put the game beyond Keady with a well taken goal.

’Comer were winners by a somewhat flattering 2-6 to 0-4. A good crowd travelled to support the team and this was a huge help to players and management.

’Comer faced crack side, Our Lady’s, Templemore, Tipperary in the decider. Our Lady’s were convincing winners in the Munster championship and the All-Ireland semi-final.

Castlecomer are a hard-working and dedicated team. Such fine qualities played a big part in helping them become All-Ireland champions. The initial clash in Urlingford was a draw. They trailed by four points at half time but never flinched.

That sort of spirit broke Templemore, and on the never to be forgotten day in Birr Castlecomer Community School became All-Ireland champions. Performances all over the field were of inter-county standard.

Katie Nolan hit every free like a pro. She looks destined for All Star status, and her sister Amy thrived in a new attacking role. Captain Edel Coonan never stopped working and scored the point of the day. She epitomised a captain’s roles and led by example.

The forwards worked their socks off. Aoilean, Aine and Traci never stopped running and the elusive Niamh Butler knocked over two wonderful points in the first half. Trish Buggy and Orla O’Neill were steady throughout and cleared plenty of ball in both halves.

This victory has left team management Mr Nolan, Mrs Clifford and Mr Browne dreaming of further All-Ireland glory. This current crop of players have two more years in the school.

The junior team is made by players from St Martin’s, Cloneen, Conahy, Castlecomer and Ballyragget. Support from the community and surrounding areas would be greatly appreciated by the team and management on this big day for the young ladies.

The management and school thanked all for their support over the season, and in particular Paddy Coady of Castlecomer, who generously sponsored a set of jerseys.